Wednesday’s Soudal Classics Cyclocross Masters in Waregem, Beglium is the season-ending party for the racers and fans. It’s a unique event at a unique venue, and as a non-UCI event, it takes liberties in terms of course design, race length and fun and games.

Two unique events that please the fans are the professional relay races and the Ion High Jump event:

The high jump is at 7:00 p.m. Last year, Tom Meeusen took top honors, jumping over a 70cm high bar as seen below:

The race also features a relay race, following the lead of the USA Cycling National Championships and California’s grassroots Rockville series (which will have its relays this Sunday).

The relay race, held at 6:30 p.m., has 12 teams comprised of two men and one woman. When possible, racers are from the same team (even same family), but racers from different teams can comprise a relay team for the short, sub-30 minute race.

After the relays and high jump, the women take to the mostly-paved, technical course under the lights for just 20 minutes, while the men race for 30 minutes. Earlier in the day there are youth races, and Sven Nys’ son Thibau has taken part in the past: 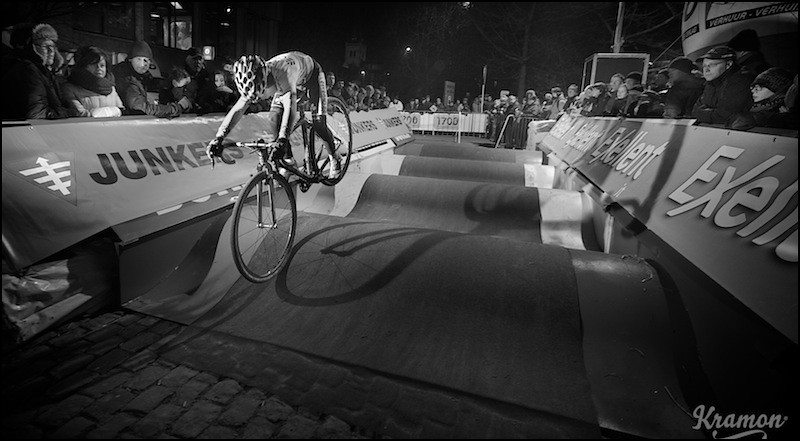 Want to see what’s in store for the racers tomorrow night? Go along for a ride with Gianni Vermeersch for a lap of the wet, hairpin turn-filled 2015 course. Full start lists below the video.