NORTHAMPTON, Mass.—The Verge Northampton International presented by Cycle-Smart was dominated by the riders of Cannondale p/b Cyclocrossworld.com. Emma White rode away with the Elite Women’s race early. Curtis White would narrowly beat teammate Stephen Hyde in a sprint to the line for the Elite Men.

The Look Park venue featured fast, flowing turns, technical chutes and classic rooted New England terrain. Athletes faced frigid temperatures and changing conditions throughout the day on Saturday, which would be the 27th year for the Verge Northampton International, the oldest UCI cyclocross race in the U.S. Both elite races awarded points of the third of eight races in the Vittoria Northeast Cyclocross Series presented by Clif Bar and Cycle-Smart.

In the Elite Women’s race it would be Emma White in control from start to finish. The Delanson, N.Y. native would drive the pace making her escape early on lap two.

“I’ve been racing this race since I was nine years old,” said White, who will take over the Vittoria Series overall lead with today’s win. “I love coming here, so it’s special to come back. I just played it out and see how it shaped up after a couple of laps.”

“I was never able to completely take a break because it is such a rooty course, a rocky course. You want to be cautious in some of the corners. And it’s such an easy course to get a flat. So, I just couldn’t count anything out and drilled it the whole time in case anything happened.”

Riding solo, White aimed to ride smoothly for the final laps. “I just wanted to keep it clean. So I went really hard in all the power sections. Because of my gap, I was able to take a little bit of a breather and be cautious in all the technical sections. So I just kept going to the finish, didn’t want to count anything out. Anything is possible with all the roots and rocks. So, kept it clean and fast.” Fighting hard for second place would be Rebecca Fahringer (Stan’s NoTubes p/b Maxxis/gofahr) of New Hampshire. “I expected some games to be played the first lap, so I knew it was windy and there were long stretches, so I sort of tucked in third or fourth wheel.”

“Then Emma was like ‘see ya’, so that did not play well for me,” Fahringer added. “I was happy to hold second. If I had been able to hold Emma’s wheel from the start? I couldn’t have throughout the race. She’s riding so great right now. I’m happy to come in second to her.”

When White attacked early in the race, Fahringer was unable to respond. She said the course conditions seemed to fluctuate throughout the afternoon, with temperatures hovering in the mid-30s. “I tried to play it smooth in the corners, because the ground was changing throughout the whole race. It was kind of getting thawed out, then it was refreezing, and some of the ruts were going away and the lines were changing.” “I tried to stay on Emma’s wheel, which did not work,” said Kemmerer. “She’s very, very strong on the flats. Rebecca (Fahringer) and Ruby (West) caught me, and we rode as a group. Then Rebecca and I pulled away. And that was all well and good until I tripped over the barriers and smashed my face on my bike. When I fell my front wheel hit the second barrier and the bike bounced back into my face. It rang my bell a bit.”

After her spill, Kemmerer would rally and charge back into podium contention. “If we had one more lap it might have been really interesting. I didn’t realize the time gaps were that small. It’s a tough course. There’s a lot of pedaling.” 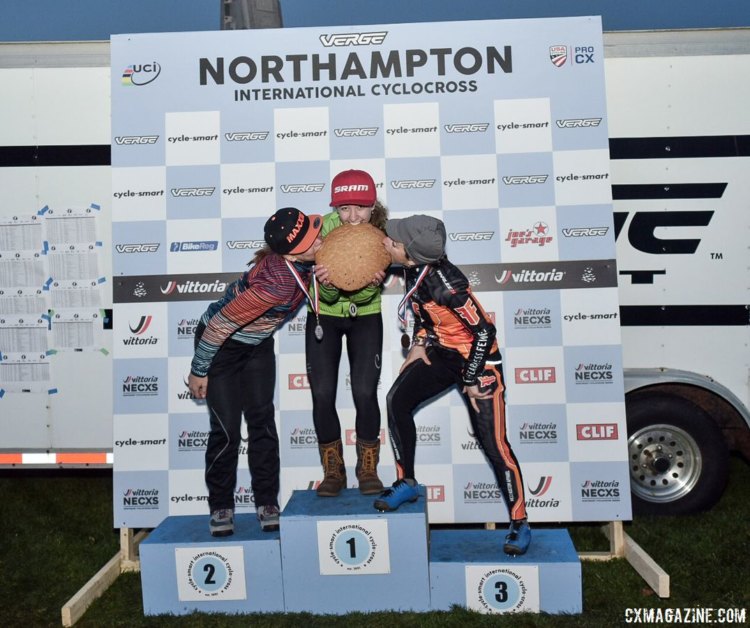 The Women’s podium of White, Fahringer and Kemmerer celebrates with the traditional eating of the cookie. 2017 Northampton International Day 1. © Chris McIntosh

The Elite Men’s race would also be controlled by the Cannondale p/b Cyclocrossworld.com duo of reigning National Champion Hyde and teammate Curtis White, who won both days of Northampton in 2016. The duo rode away from the competition early and would work together for the majority of the race.

“We both got away pretty early,” said White, older brother of the Elite Women’s winner. “We were working together for a bit. He was a bit smoother on the technical sections. We were just cranking it up the last few laps. It really came down to just the finish. The last lap was a very fast lap. I made a mistake back in the woods. I came around just before the barriers. I took the barriers and it just came down to a sprint from there.” Hyde was excited to work together with White. “This was a great day for us to really get out there and ride as a team. The course was really fast. It’s a lot like a big grass crit. You’ve all seen Curtis, he’s a huge crit racer! So it was a great opportunity for us to ride together, dial in the course. He put on a real clinic on how to race.” The final spot on the podium was taken by another New Englander, Jack Kisseberth (JAM Fund / NCC) of nearby Westhampton, Mass. taking a three-man sprint. He edged out Justin Lindine (Apex/NBX/Hyperthreads), and Anthony Clark (Squid Squad) followed one second behind for a close fifth.

As the sun set halfway through the race, the temperatures dropped. Hyde noted, “As the race went on, the wet spots on the course started to freeze over. It changed up a few of the corners, but once it started to get dark it was that top section where you had to keep your eyes open a little more.” Hyde will not return to race tomorrow in Northampton. “I am taking tomorrow off and I leave Tuesday for Europe. So it will be a big fall campaign for me. I’ll go over through Nationals.”

The Northampton International returns for Day 2 on Sunday. Slightly higher temperatures are forecasted.

Next post Van Loy Powers Up at the End to Top Brammeier at Superprestige Gavere - Report, Results