November 3, 2007; Fair Hill, Maryland, USA: Over two hundred riders converged upon the Fairhill Nature Center in Elkton, Maryland Saturday for the 4th round of the BikeReg.com MABRAcross Series. The riders were treated to a swoopy, curvy, technical race course designed by course guru extraordinaire Tom McDaniel.

The race was promoted by First State Velo Sport in cooperation with the Delaware Cyclocross Coalition of Delaware. Mother Nature played her role delivering 50 degree temperatures, gray skies and blustery winds. Perhaps the first true cross weather felt in the Mid Atlantic this season. The course was a Classic Northern Delaware cyclocross course that featured two natural barriers, a “sand pit of doom” which required most riders to run through the tough deep sand, and lots of tight corners.

In the Elite Men’s race, The Rite Aid Teammates of Ryan Dewald, and Stephan Kincaid worked together against Fort Factory Team rider Greg Wittwer. Dewald was able to escape midway through the race leaving Kincaid to battle it out with Wittwer for the second spot on the podium. Coming into the final turn, Wittwer and Kincad were even up, but Kincaid was able to prevail in the sprint. Mark Kutney of Van Dessel Cycles and Delaware Cyclocross Coalition of Delaware member Blair Saunders (Secret Henry’s Team), had a sprint themselves to round out the podium, with the cagey Canadian taking fourth place, as well as and the elite master’s victory.

In the Elite Women’s race, Carolyn Popovic of Team CICLE gained an early edge riding the sand pit of doom, where most were forced to run. Carolyn would ply this advantage and run away with the victory. Taking the second step on the podium was Besty Shogren of the Fort Factory Team. Kristen Kelsey riding for Evolution Cycles (Philly) was third, Jennifer Maxwell (Team Kenda Tire) was fourth, and Elizabeth Harlow from Hunt Valley Cycles, won a hard fought sprint from C3-Sollay.com’s Lisa Vible.

Next post Weekend Crossings: Compton and Trebon Double Up in Boulder, Haywood and Bishop Win Tacchino 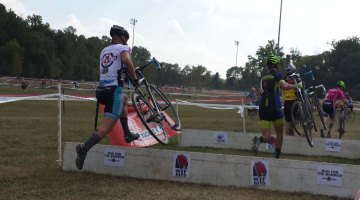