US Nationals Racer Profiles: Cannondale-Cyclocross World’s Kaitie Antonneau Is Ready For A Title 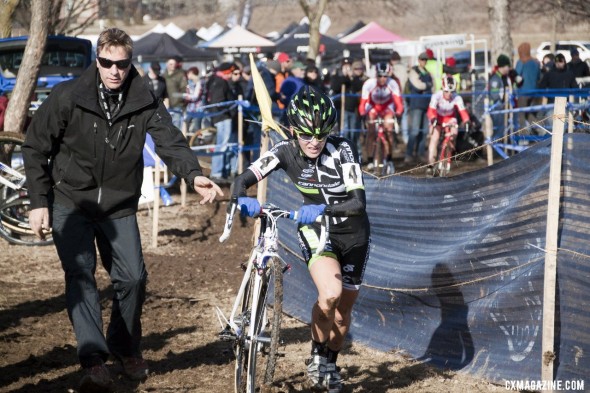 Kaitie Antonneau on her way to a second place finish last year at Nationals. © Andrew Yee

If US Nationals already seems like a two-woman battle, don’t forget that the US has depth in the women’s field like never before. While Katie Compton (TREK Cyclocross Collective) is the overwhelming favorite, and Georgia Gould (Luna Chix) has been riding strong enough to be a challenge, be very careful who you count out.With a whole slew of riders capable of taking the stars and stripes, Kaitie Antonneau (Cannondale-CyclocrossWorld) is a dark horse with serious potential to surprise.

Antonneau will be turning 21 on New Year’s Day, but all celebrations will be on hold until after Nationals two weeks later. It’s been a largely successful season, though Antonneau herself will admit the firepower up top has kept her from her main goal. “No podiums in USGP has been a bummer, but the level of competition makes it harder…at the same time, I’m happy where I’m at.”

Her recent results have shown her increasing fitness. After a trip south to Texas over Thanksgiving, she’s put together some great results at Derby City (sixth) and a great weekend at Deschutes Brewery with a fourth and 10th place in Bend. It’s a good sign as she heads to Belgium for two World Cup races over Christmas Week.

Antonneau knows who to keep an eye on at Nationals and hopes to use some solid World Cup starts to make her run. While she thinks Compton has the edge, she will be keeping tabs on a few other riders as well. “Georgia will be there, she’s tough. Meredith (Miller) is there. She was bummed to miss the early racing, and missed the World Cups, but you can’t ever count her out.”

With so much experience, Gould and Compton have taught the young Antonneau a thing or two over the years about how to ride a smart race. At just 20, Antonneau is still developing as a rider, but she is light-years ahead of most racers her age, and in no small part from what she’s observed from the likes of Gould and Compton. “Georgia and Katie have so much racing experience and tactics that they have an edge, but I’ve learned a lot from Katie over the years that I don’t have to rely on just hammering and being stronger.” Antonneau has ridden smart all season, working diligently but let others chase at times as well.

But what will be a successful race for Antonneau? She’s got a goal, be she won’t say exactly what place that is. “I want it to come down to a number, and I know what that is, but if it isn’t, I’ll just roll with it – it’s just one race.” As one of the youngest of the favorites, she’s also got a lot of time to win the big ones. If she gets it in 2013, it’s just icing on the cake for this future star of American cyclocross.

For our full 2013 Nationals coverage, keep an eye on our page here.