CX Apprenticeship: The End of Europe Year 2 and a Look Forward to Year 3

As I sit here in Minneapolis with temperatures below zero degrees Fahrenheit and snow depths measured in feet rather than inches, it’s hard to believe I was in Belgium a week ago.

In Oudenaarde, the daffodils are up. I raced the last two races in short sleeves.

My final weekend of racing was the Telenet Superprestige Middelkerke and Brico Cross Hulst. As always, the races were a mixed feeling of progress and a reminder that there are still things to work on. Racing cyclocross in Belgium will do that to you.

With dry sunny days leading up to Middelkerke, many assumed it would be a dry race. Furthermore, the weather on race day was unseasonably warm with bright sun and highs in the 50s. My mechanics arrived looking decidedly relaxed, wearing sunglasses and seemingly anticipating an “easy day.” Likewise, one North American even uttered the prediction: “bone dry.”

Before I headed out from pre-ride, I received a text from Stef Wyman, “Is it muddy?”

Turns out, Stef was right to ask.

The first two-thirds of the course was mostly dry with occasional greasy spots but nothing tread clogging. Then came the pancake flat, low section by the pit area.

The soil there was an odd mix of mud, sand and clay. In places, wet sand suctioned the tires. In others, the clay-like mud clogged an inch deep on the tread. Finally, there were patches of classic Belgian heavy wet “modder.”

After pre-ride, I rolled back to the tent and told my mechanics, “You are going to have a busy day.”

Then I responded to Stef, “Not muddy … more like cement, or quicksand.”

We racers arrived at Middelkerke a bit relaxed and imagining an “easier” day. What we got instead was “true Belgian racing” with technical segments, two difficult sandpits and lots and lots of running.

After pre-ride, I often discuss pit strategy with my mechanics. Often one pit is better to switch in because it comes after mud but before a drier section or a climb. One exchanges a dirty bike at a time that having a light, clean bike will have the most benefit.

In Middelkerke, Pit 1 came after the driest section of course. The pit lane was also no faster than the riding lane, so pit one had little to offer.

Pit 2? Well, Pit 2 was the center of a muddy morass. There were 200 meters of mud going into it and another 100 plus meters of mud after it. Likewise, the run through the pit had just as much mud as the run around the pit. The answer was clear: Pit 2 was “the” pit, yet one would need to run in and run out.

The unexpected mud made Middelkerke a fitness race. We were off our bikes for minutes rather than seconds. The run past Pit 2 seemed endless. It was that kind of pain place where higher thought is impossible. You stare at a fixed point ahead and suffer, repeatedly urging unwilling legs to go faster. All around, there were riders becoming disheartened and quitting their effort.

Middelkerke was one of my best races of the season. When you have spent two seasons racing the same competitors, you know where you stack up. In Middelkerke, I finished in a better group than is my norm. Nevertheless, I was pulled a lap down.

Wow, today @telenet_superprestige_cx Middelkerke was pretty amazing. First, it was ☀️and in the 50s. Need I say more? Secondly, I had one of THOSE races. Ya know, when you know you've done well and things come together? 22nd and the group of riders I finished among was 👍. Picture top right: Looked up shortly after this and smiled. Fans watching us warmup, a man smoking an enormous cigar upwind, and another staring at our bikes on the rack. So 🇧🇪. (And so funny that I've gotten so used to it all!) And the "mud" — actually more like quicksand or concrete….. There was so very much running today–sweet payout for all those @cxhelen "run club" workouts I've put in. 🤣🤣 #ridelikeamyd #happyracersgofaster @amydfoundation @cyclocrosscustom @feedbacksports @lazersportusa @pearlizumiofficial @rideshimano @stansnotubes @bikeflights @hbstache @grimpeurbrosspecialtycoffee

Last year, “lead lap” meant everything to me, yet I’ve learned that the 80 Percent rule is loosely interpreted in Belgium. In the last two years, I’ve been allowed to finish on days I did not deserve to and have also been pulled unexpectedly. Lead lap is a fickle thing.

On the way home from Middelkerke, a fellow American mentioned, “Don’t you hate it when you think you have had a good race and then you look at the results …”

I’ve always believed in the practice of evaluating my own race before looking at the results. In Belgium, this practice is especially important. I’ve had to learn to be a little kind to myself.

Put simply, it’s not the U.S. When you look at the results and those finishing 10th, 15th, 20th are truly “World Class.” The bar is different.

Whether or not you like the new UCI “international field” rule that’s removed most C1s from the U.S., it is reflective of the disparity between racing in the U.S. versus Belgium. UCI points are infinitely more difficult to earn in Belgium. Coogan Cisek has become acutely aware of the difference between U.S. and European racing during her Euro stints. photo: Fabienne Vanheste

Oh, and that “mud” in Middelkerke? The discussion in the pits was that it’s the result of “baggeren” (dredging). Belgium has a practice of dredging the sea edge in order to maintain the depth for boats.

Actually, Belgium is a world leader in dredging. Belgium is home to two of the five largest international companies in the dredging industry.

Rumor has it, dredged ocean bottom sand was dumped on the race site. Or maybe it was canal sand. I have no way of knowing if the dredged sand rumor is fact, or mere “pit legend.”

Perhaps the mechanics just needed a good reason to explain working so hard on a pleasant sunny day! Belgian cyclocross is a beautiful mix of fact and legend.

After having such a good day in Middelkerke, I expected a similar result in Hulst. Instead, my result in Hulst turned out to be representative of where I am at with my riding.

The course in Hulst is memorable. In fact, Hulst was in the back of my mind all season.

Hulst scared me to death last year. The course races up and down the canal banks of the moat that fortifies the city. The descents are straight down the bank and the run-up is a hand-over-hand climb.

Last year during pre-ride, I somersaulted down one of the banks several times. During the race, I ran the steepest descent for a couple of laps before competitiveness finally drove me to ride it. All this year I wondered, would I still be scared in Hulst?

During pre-ride, I took several deep gulps of air before launching myself over the edge, but it was fine. I kept waiting for the fear to creep in but instead, my confidence grew with each repeat. 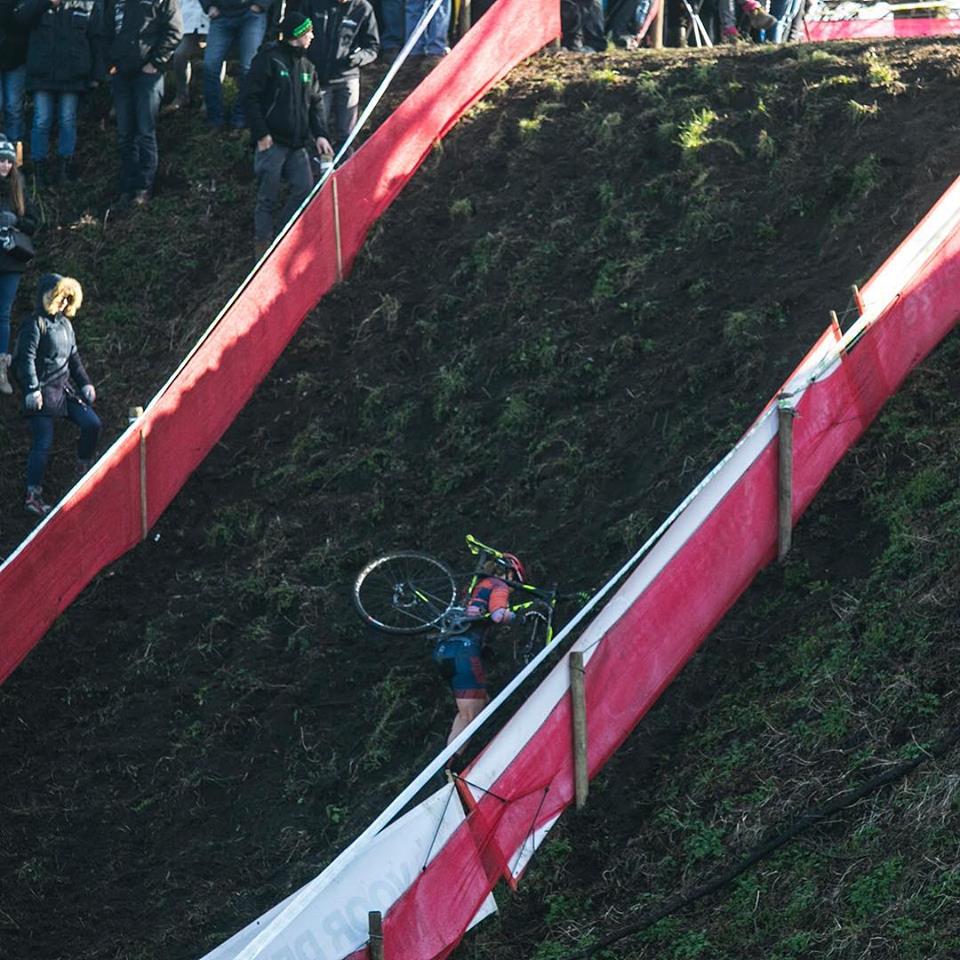 Since the course bottlenecks almost instantly, the start was crazy fast and aggressive with plenty of elbowing and shouting. Like a crit, I’d find a gap and move up, but then get stuck behind someone or something and get swarmed. Even once I got going, the women whom I had finished among in Middelkerke were long gone. For a moment, I wondered, “What’s wrong with me?”

Then I figured it out. It wasn’t enough to just to be able to ride the course clean. I needed to race it. As the race evolved, I followed some good wheels, came off the brakes and rolled the drops.

Hulst showed what I still need to work on. Whereas Middelkerke was a fitness race, Hulst was a technical race. Think racing the most difficult of mountain bike course on your cyclocross bike.

It’s clear that my greatest weakness—née, my greatest opportunity for improvement—is in my technical skills.

Even though I rode better in Middelkerke, in Hulst, I finished on the lead lap with time to spare. Faster conditions made for smaller time gaps.

I’m calling this year an unmitigated success. I did the most challenging thing—I made it to the end of the season with good form, health, and happiness.

I’ll admit, I was cracking a bit in the end. I got through the last race and immediately felt very tired. In the days between Hulst and flying out, I was on edge, tired and emotionally burnt. Suddenly, I could not wait to be home. Coogan Cisek is headed back to Europe next season. 2019 Brussels Universities Cyclocross. © B. Hazen / Cyclocross Magazine

Year 3, I believe the outside stress will be minimal, and I can better focus on training, racing and resting.

There was a lot of stress in the late weeks of my Belgian season. I was over budget and had no work booked for the offseason. I was worried about funding another season abroad, yet committed to making it happen. Regardless of age, one never wants to quit when the trajectory still seems to be up.

Thankfully, things are coming together. The end of the season for elites/pros often means having one foot in one season and the other in the next, as we plot, plan and attempt to line up sponsors.

I’ve had some breakthroughs on the sponsorship front, and feel assured I can continue, though I still need more help. I’m also relieved to have secured temporary, part-time contract work for the off-season, thanks to an individual and company who believe in me.

Even though it will be Year 3, Helen and Stef assure me that cyclocross never stops being an apprenticeship—one keeps on learning.

Look for the Cyclocross Apprenticeship Year 3 at Cyclocross Magazine, starting early Fall 2019. Thanks to everyone who read my diaries this season.