Mani had an amazing ride day two, keeping with with Compton until the national champion used the climbs to her advantage.

Compton Surges at the Start for Another Win

Katie Compton (Trek Factory Racing) had better start than Saturday and quickly established herself at the front of the Elite Women’s race. Gabby Durrin (Neon Velo) again took the holeshot, but by the time they reached the tricky Trek downhill section Compton was in the lead with Caroline Mani (Raleigh-Clement), Durrin, and Nicole Duke (Marin-Spy) on her wheel.

At the run-up, Compton and Mani opened a gap over the front group.  Mani’s tenacious ride would be the story of the day.  Mani stuck with the reigning U.S. National Champion until Compton opened a gap by riding the hills lap after lap. Compton wore Mani down and moved into a comfortable lead. Compton found her footing right from the start of the Trek CXC Cup.

“Today was good. It was kind of similar to yesterday. It was windy and bumpy, of course. The course broke down a little bit,” said Compton. “I just rode smooth. It was fun. You get the course dialed in from the night before, and today it just felt a little faster, so it was good. A close race today.”

By the last lap Miller had opened a slight gap over Durrin and held it to the line.

The elite men set a blazing pace from the gun. Jeremy Durrin (Neon Velo) took the holeshot and led the field into the front section of the course with Jeremy Powers (Aspire Racing) and Zach Macdonald (KCCX) on his wheel.

With seven laps to go, Powers opened a small gap heading into the run up as Johnson, Durrin, Berden, Krughoff, and Jamey Driscoll (Raleigh-Clement) continued to chase.

The next lap the deck was reshuffled after Krughoff launched an attack out of the chase group. Powers rolled through the start/finish alone with Krughoff nipping at his heels. Krughoff chased Powers first, and was rewarded with a second place finish.

At five to go, Johnson disappeared from the chase group leaving Durrin, Berden, and Driscoll on their own to battle for third.

“It was a struggle. The first couple laps I knew I was kind of in trouble, then I fell off the cliff, so to speak,” said Johnson. “I tried to keep it together. I didn’t want to stop and waste the day because it’s such a fun course. One of those days, a struggler.”

At two to go it was a race for third with Powers and Krughoff well clear of the chase. The Raleigh-Clement duo of Berden and Driscoll rode a tactical race taking turns attacking the Durrin. Driscoll attacked in the closing laps of the race, but his move gapped off Berden and left him alone with Durrin.

With Powers and Krughoff taking first and second, the race for third came down to the last corner. Durrin and Driscoll came into the finishing stretch flying, but as Driscoll launched his sprint he pulled out of his pedals. Durrin went clear for third.

“He [Durrin] actually overtook me in the last corners, and I pulled out of my pedal on the sprint,” said Driscoll. “So I’m not sure if I would have come around him, but it was kind of a bummer way to end the race.”

It was Powers’ second consecutive win of the weekend. “It wasn’t easy. Allen put up a good fight today,” said Powers. “He came a little late but by the time he got to me he kept the gap at 10 or 12 seconds. Then with 3 to go I pushed it as hard as I could and I was able to open it up another 5 or 10 seconds. I was happy with that; it was enough of a buffer. I rode to keep that gap for the rest of the day.” 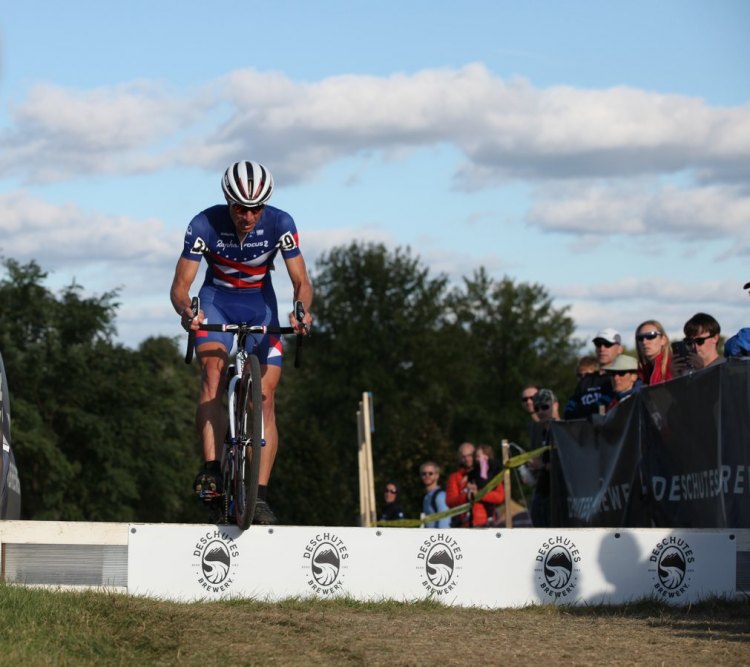 Jeremy Powers rides the barriers on his way to yet another win.