Crashing and Popping in Ohio – A Column by Ben Popper

So, in my last update after Day 1 of the Cincinnati International Cyclocross Festival, I talked about how important the lineup is in my chase for one UCI point. Now I’ve realized I was too worried about my lineup and not worried enough about my start. Thus, for Saturday’s Java Johnny’s – Lionhearts International Cyclocross race at the Sunset Park, part of the Ohio Valley CX series, I decided that it was time to actually check that I was in the big ring and really get off the line like it mattered.

One minute to start. The gun fires. We’re off. But just twenty feet into the race, the group directly in front of me exploded as everyone started going down. I was not involved in the initial mix-up, but already into a full sprint, I dove right into the pile. The chaos of trying to pull apart a bike wreck is never fun. The guy on the ground, already torn up, was being run over, and there was total lack of regard for equipment as bikes were being ripped from one another. Somehow I got out of it unscathed and started plugging away at my hour.

So much for a fast start, though.

Because of the crash, I had no idea where I was in the pack. A group of ten of us or so had pulled away from the crash one at a time and had created a nice little pace line. As we tried desperately to get ourselves back into the race, we were all pushing the pace as fast as we could. The first indication from Julie I was given as to my placing was mid-twenties and I figured I was in a good place. The problem was that the crash started in the second row, shuffling the deck, and the group I was in contained guys I can normally easily beat as well as guys slated for the top ten-and it was those guys who were pulling us as they chased back to where they wanted to be. So while I pushed to stay in the group, my entire box of matches was being lit ablaze.

I managed to make a few good moves and stay with the front of the group. I was making it through the sand pit faster than many of the riders and making up time over the barriers and through some of the more technical sections. With five to go, I topped out around 21st.

And then everything started to fall apart. Across the finish line with four to go I could tell I didn’t have the snap in my legs as I did from the previous laps. On the backside of the course , on the slow grind of a hill, my body had had enough and started to give up. I did not feel like I was pedaling at all. My legs were buckshot; the grass was oatmeal.

Damage control does not even really describe the mode I was in. With three and two to go, racers were passing me like I was standing still. Mid way through two to go, Jeremy Powers, the eventual winner, passed me and that was it. I had two riders catching me and I pushed what little was left into my legs through the remainder of the lap to take 33rd-one lap down. In those last two laps I probably had eight or nine guys go around me, and in the end I felt defeated.

I had put so much effort into getting back into the race from the beginning that I did not have enough left to close it out. There are days where I really feel like I belong in this field and then there are others where I feel like I should just stay home. Today fell somewhere in between the two. The course was fantastic and I really enjoy racing against such fast riders, but at the same time, getting lapped is no fun either. There are so many ways to look at it and I just need to stay focused on the most important one: I love racing cyclocross and I am having a fantastic time this season. Tomorrow I need to race my best and really push for that top twenty. I’m going to leave everything I have out on the course. Thanks for reading. CXM Columnist Ben Popper is on a mission to achieve one goal – earning just one UCI point. Follow Ben on this journey this season through his regular journal. His journey took him to Michigan, and then Vegas and Wisconsin, and the Cincinnati International Cyclocross Festival.

The Ben Popper Diary is Back: Losing a Bar Fight and Getting Run Over 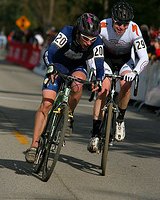