We were packed tighter in the car than the turkey had been stuffed the night before. It took the entire length of the drive to Iowa City before the final taste of Thanksgiving left my mouth. That was fortunate because the gut wrenching run up Mount Krumpit eight or nine times was going to be punishment enough without leftover dinner pulling me down. This year Jingle Cross Rock’s three races were being held over two days and one night. Record rainfall during the week was ready to wreak havoc on drivetrains and make for three tough days of racing.

The course on Friday night had a reputation that preceded it. Bikes had less paint than mud and I saw at least half-a-dozen snapped derailleur hangers rolling around the parking lot. It had been lit much better than I had expected, but the two corners that did have dark spots were dark. It made for a super-exciting lap and a race that seemed way less than an hour long. The best part of the whole lap was turning into that second turn, completely dark, after the starting whistle. It was probably the slowest start I have had all year. We were all playing it safe though, no reason to hurt ourselves two weeks before nationals. As the laps and the temperature dropped, my race heated up.

Turns out, I was in eleventh. Brady Kappius was in tenth, no more than twenty seconds in front of me. That was twenty one seconds to that fabled UCI point. Brady and I have raced each other a lot this year, and we have finished in front of each other almost just as many times. So I knew I could catch him, but I was going to have to really work for it. I’d close the gap on some parts of the course, but it would open up on others. I got lucky with one to go when it was my turn to rip apart my rear derailleur, but I was only about fifty feet from the pit – not a whole lot of time lost. The last time up that hill, I ran as fast as I could, but seemed to only manage a crawl. He pulled away on the last lap, but we both worked as hard as we could for our finish. It was awesome racing at night and a great finish was a perfect way to cap off the day.

Saturday, with the addition of a bunch of big names and fast legs, the top ten was pretty much out of the question. That didn’t mean the racing was going to be any less fun. The course reversed direction a little and the long, slow, gradual run up became a short, steep, slow run up. Things really had not dried out at all but were getting smooth and fast. The sun was out and shining, keeping things warm and easy compared to the night before. I had a good start and settled in way farther in front of where I expected. It turns out that for the first bunch of laps I was chasing Ned Overend. Everyone was giving me crap for being beaten by someone twice my age, but I was looking at it a little differently. I was being beaten by a legend and I was okay with that. I faded a little towards the end, but still finished really well and in the money. The event of the day was still to come though, we all crashed a local hotel pool and had a fantastic time keeping the legs loose and jumping into the shallow end.

Sunday, I awoke and felt way better than I expected. Yeah my shoulder was black and blue from carrying the bike and my back felt like a horse kicked me a couple times, but the legs felt pretty good. I was reminded of something Molly Cameron told me the last time we raced three times in a weekend, race within yourself and ride around the guys that are popping. That was the plan. Oh, and stay warm. Without the sun out and the wind whipping, things were cold. I had the best start of my year, rolling past the pit inside the top ten in the front group. That felt amazing, but I knew it wasn’t going to last. I tucked in behind the super train into the wind  and as we hit the hill the first time, I backed off just a bit. I know my place, and it is not being towed around by Wells. I’m just not that fast. I had another strong race, but as things dried out and got more fast, it seemed less and less eventful. A third top-twenty finish on the weekend and I was struggling out of my wet and cold clothes for the ride home.

I put my bikes through hell this weekend and they took the beating with a smile. Julie really kept me going, though. The clean bikes made such a huge difference when I took them. Going from a bike that weighed twice as much and had stays caked with mud to a clean one made more difference than I ever realized. I was sprinting out of every corner, clean bikes just go fast! I need to send out a huge thank you to everyone who cheered me on all over the course, and to Rock Lobster for what is always the best equipment out there… Paul, Chris King, Shimano, Easton, Fizik and of course… Rock Lobster! 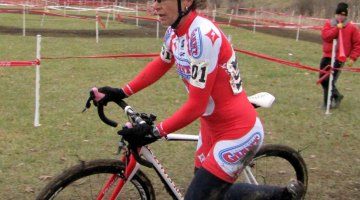