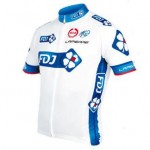 Chainel will be pulling on a new jersey come next season.

French Pro ’crosser Steve Chainel, who not only ranked 14th in the UCI’s 2009/2010 Elite standings but also has been seen riding strong in the Pro Tour (taking 4th in Stage 1 of this year’s Criterium du Dauphine), will leave team Bbox Bouygues Telecom for Française des Jeux next season.

Chainel will be joining five-time national French champion Francis Mourey, who has been with FDJ since 2004. With his increasing success on the road, and FDJ’s presence in Grand Tours, we wonder whether the move will return Chainel’s focus to cyclocross or push him further into the Pro Tour ranks.

Next post ’Crossers Take To The Grass In Kansas