Behind THE Barriers heads to Gloucester, Massachusetts, for the Great Brewers Gran Prix of Gloucester, known across the cyclocross community as “New England Worlds!” Jeremy Powers is back in Gloucester after a long swing away from home, and is keen to repeat his winning effort from one year prior. Standing in his way are a tip-top field of riders, including young protegé Stephen Hyde, who makes his Behind THE Barriers debut. Also standing in his way is unseasonably hot, dry and dusty weather; the kind of weather that makes you want to hop in the ocean and go for a swim, a temptations Jeremy nearly succumbs to. Also on site are this season’s next big musical hit, The Sorcerers, who take you on a tour of their unrivaled touring vehicle. Once the racing starts, it’s a duel between a pair of New England’s favorite sons, with Jeremy standing toe-to-toe with Massachusetts legend, Tim Johnson, for top honors. Between racing, eating lobster, and hanging with Jeremy and his family, Behind THE Barriers takes you behind what makes the Great Brewers Gran Prix of Gloucester on of the most highly anticipated races on the calendar.

Tags: Behind The Barriers

Next post Ben Berden on His Providence Win, Europe, and His Bike

Previous post Katie Compton on Providence, the Season and her Goals 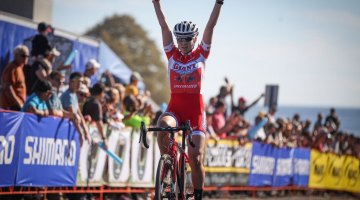