The question on everyone’s minds following Elle Anderson’s dominant performance on Day 1 was if she could repeat her solo victory. Gabby Durrin (Rapha-Focus) took the holeshot and led the field into the Bontrager run up. Durrin was the only rider who opted to ride the steep and challenging climb.

A lead group of eight that included Durrin, Nicole Duke (Marin-Spy), Caroline Mani (Raleigh-Clement), and Elle Anderson (Cal-Giant-Specialized) quickly established itself on the first lap. On the third lap, it looked like a repeat of Day 1 as Anderson opened a small gap over the group. Maghalie Rochette (Cyclocrossworld.com) led the chase of the group containing Durrin, Duke, Crystal Anthony (Optum p/b Kelly Benefits), and Meredith Miller (Cal-Giant/Specialized).

With three to go, the race settled in with Anderson sitting confidently in the front. Rochette was forced to chase alone, with Anderson’s teammate, Miller sitting on her wheel.

“Eventually it just started to thin out at the front, until it was me and Maghalie [Rochette],” said Anderson’s teammate Meredith Miller. “I was sitting on her wheel not having to do a thing, and she [Rochette] was starting to close it a little bit. I was biding my time thinking ‘If it gets close enough…’ and I could tell she was fading, when I was going to put my attack in. Then she bobbled and slide out, so that’s when I put in the attack and didn’t look back.”

At the bell lap, Anderson rolled through with a small gap with Miller in second. Mani attacked hard on the pavement to open a gap on Durrin and Anthony. At the finish, Anderson took another solo victory, teammate Miller finished second and Mani’s well-timed attack netted her third. Durrin finished fourth, Anthony fifth, and Rochette sixth.

“I was feeling a little bit all over the place,” said race winner Elle Anderson. “There was some good competition. I was definitely working really hard every single lap, right up to the line. When your heart rate gets a little elevated you tend to bobble a bit. I had a few little mistakes but that’s cyclocross. “ 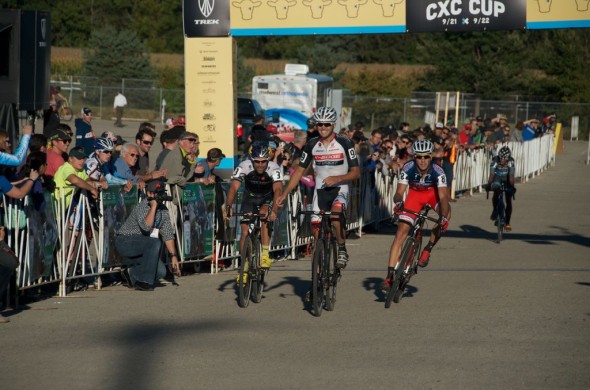 Summerhill showing off his new K-Edge/Felt kit and taking the win.

The more flowing and open course on Day 2 of the Trek CXC Cup made for thrilling racing in the elite men’s race. Ryan Trebon (Cannondale-Cyclocrossworld) took the hole shot, but it was Danny Summerhill (K-Edge-Felt) who went to work early to establish a lead group of eight.

Summerhill took a decidedly relaxed approach to racing on Day 2, “The less pressure I can put on myself the more fun I can have with it, and generally, the better the outcome for me,” said Summerhill. “Today I didn’t even warm up or anything, I was just doing wheelies in the parking lot, not really thinking about the race, and it was heaps better than what I could pull out yesterday.”

With seven to go the group of three swelled to five with Berden and Driscoll joining Summerhill, Eckman, and Johnson. At five to go Driscoll was driving the lead group with Powers surging to close the gap to the leaders.

With four laps to go the lead group was shrunk to three again with the familiar faces of Summerhill, Johnson, and Eckman at the front. At the Bontrager ride up, Trebon had nearly closed up the gap with Berden, Driscoll, and Shawn Milne (Keough Cyclocross p/b Felt) in close attendance.

Tim Johnson’s attack with two to go sorted out the final selection and Eckman and Summerhill were able to follow the elder statesman’s wheel. “The course was pretty relentless,” said Johnson. “Stand-up, sit down, stand-up, brake, always on the gas. Danny started off great and he finished great. Really I had no chance coming around him. I tried to get up next to him going into the final straight away, but we hit the straight away and he just powered away.”

At the bell lap, the challenging off-camber section saw a group of four emerge with Berden joining the lead group. The group of four stay together for the final and in the four-up sprint, it would be Summerhill who took the win, Johnson second, Eckman third, Berden fourth. Trebon rolled in for fifth.