Italy’s Alan is a bike brand that is synonymous with cyclocross. While the newest generation of cyclocrossers may have never heard of the company or seen its bikes at the local races, Alan bikes have won more World Championships than any other brand. The company, founded in 1972, has a history of innovation, bringing lightweight aluminum cyclocross and road frames and forks to the market in a time when steel was king, and racers flocked to the lugged models to save weight and have a more comfortable ride. Many are still in service, some still ridden by 1981 Giro d’Italia finishers.

Alan also introduced carbon fiber frames in 1976, bringing carbon to the top of many cyclocross podiums, swapping out its narrow diameter alloy tubes for carbon ones, well before Asian-made carbon frames started to become popular.

The company has continued to build many of its frames in Italy, and although it now offers some Asian-made monocoque carbon frames, it’s also remained true to its tradition of mating separate tubes to form lightweight frames. The new Alan Super Cross Carbon, part of Alan’s Legend series of frames, is one such creation, and thanks to new upstart Colorado-based Velosport Imports, the brand and its iconic bikes are now readily available in the States again.

Alan Super Cross Carbon: A Mix of Old and New The winningest cyclocross bike brand is back, and the Alan Super Cross carbon cyclocross bike is a modern tube-to-tube construction but features a retro aluminum lugged look. © Cyclocross Magazine

Using tube-to-tube full carbon construction, Alan has created a modern cyclocross frame that offers modern features that consumers will demand, including a competitive 1150g frame weight, a tapered head tube and fork, generous tire clearance for mud or 40mm tires, internal cable routing, and a BB86 option, all while keeping the small diameter tubes and lugged appearance (via metallic paint) that old-timers will appreciate and vintage bike lovers will covet. Show up at L’Eroica with one of these outfitted with some barcon shifters ad toe clips and you just might fool the vintage bike police.

Our test model came with a somewhat retro BSA bottom bracket—which we were happy to see after dealing with a lot of creak-prone PF30 bottom bracket shells. Another area that Alan has kept quite retro is in the brakes. Cantilevers are the only option on the Super Cross Carbon, although Alan has plenty of disc brake cyclocross bikes, including the new BB86 Cross Race Max DBS frame that features world-class tire and mud clearance (which we’ve ridden and awarded before, when it was flying under a different brand). Cantilevers still win plenty of races under Katie Compton and many Europeans, and BSA threaded bottom brackets are easy to install, maintain and remove. It could be a smart move by Alan, at a time when cantilever bikes are hard to find. We’re guessing the type of cyclocrosser who may be attracted to the vintage look of the Super Cross Carbon may also still value the lower maintenance needs of rim brakes and threaded bottom brackets (even if cyclocross legend Don Myrah has Retired his Alan).

Hand-built in Italy, with Custom Options

The Super Cross Carbon is handmade in Italy, and the construction process, because it doesn’t rely on a mold, allows for a whopping 11 sizes, and either BSA or BB86 bottom bracket options. All those stock sizes don’t meet your needs? Alan will build a custom frame for you, with surprisingly, no upcharge. Velosport Imports works with American customers, engineers a custom frame drawing and geometry, and works with the builders in Italy to deliver a frameset built just for you.

The Alan Super Cross Carbon is the company’s flagship cyclocross model, and as such, it’s not cheap at $3,000 for the frameset (including fork and headset). That may sound steep, especially when compared to complete carbon bikes built in Asia, but this isn’t a factory-built mass-produced frame. Our first glance at the Super Cross Carbon was at the 2015 North American Handmade Bicycle Show (NAHBS), and put in that perspective, the pricing seems about right for a handmade carbon frame with so many size options, and a pretty amazing value considering custom geometry is available for no additional charge. Made in italy, with an all-carbon construction, the Alan Super Cross carbon cyclocross bike still features smaller-diameter tubes and an paint job that celebrates the alloy lugged models of the 80s and 90s. © Cyclocross Magazine

We’ve just started to test this model, and have to say that nowadays it’s rare to pull a bike out of a box and immediately wish there a cyclocross race we could jump into. Purely based on aesthetics, the Alan Super Cross Carbon looks different than the typical factory-molded carbon machine. It’s not your dad’s old glued and screwed Alan, and yet is classy and stirs up fond memories of an earlier era of cyclocross.

Dressed with the latest technology, but featuring canti brakes and relatively small tubes, perhaps the ride will also remind us of the days when stiffer everything was not better, and when brakes were light, simple, and did not have to be bled and could last more than one muddy race? Gravel enthusiasts who don’t want disc brakes may also be intrigued by the Super Cross Carbon, as the frame offers clearance for today’s modern 40mm gravel tires like the WTB Nano or Clement X’plor MSO.

Our test model came equipped with a top spec build, with SRAM Force CX1, Vision Metron 40 carbon clinchers, and Dedaccai Zero cockpit. It’s a lightweight build and bike. The 56cm bike as built, without wheels (as print subscribers are used to seeing) is just 10.89 pounds, lighter than most test bikes that pass through our test crew. With the Vision Metron 40 clinchers and WTB tires, the complete bike tips the scales at just 16.71 pounds. 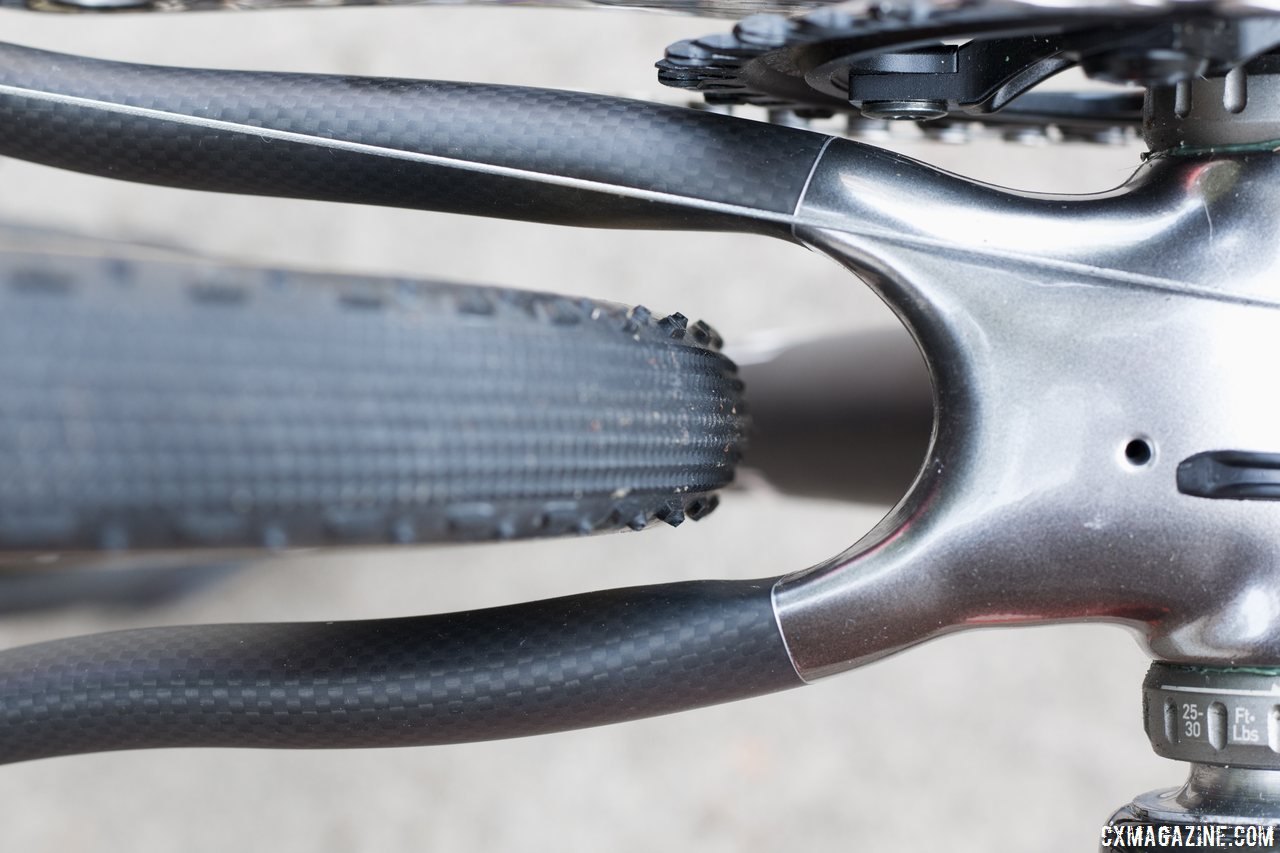 Stay tuned to our site and subscribe to our print magazine for our full review, and our deeper look at the frame’s ride and geometry. Want a full discussion of the frame’s geometry? That will have to wait until after we’ve developed our impressions without the bias of geometry chart study sessions.

See full specs at the end of the gallery. Navigate through the Alan Super Cross Carbon close-up photos with your arrow keys, by swiping, or with the buttons: Next post Technique Tuesday: Amanda Nauman on Training, Nutrition and Hydration for a 200 Mile Gravel Race