We're still culling through images of the many cyclocross, gravel and other interesting bikes and products from the 2016 North American Handmade Bicycle Show. We've already seen a number of great builds and new products from a host of builders and manufacturers, all of which you can see here.

As we continue our look through our photo files and show notes, we found a number of other interesting bikes to share with you. Philosophy Bicycle Co. is a newcomer of sorts, launching this past weekend at NAHBS. We say "of sorts" because founders and builders Chad Lovings and Bryce Baumann had previously operated as LoveBaum Bicycles after meeting in Denver, Colorado, studying with Koichi Yamaguchi. In their first go at NAHBS last year, they took home the Best New Builder Award with a catching cyclocross bike.

Philosophy Bicycle Co. is the next chapter of their saga. They brought an amazingly detailed Dirt Ripper to the 2016 show. Made with a mix of True Temper S3 and VHT steel tubing, the bike features a SRAM Force 1 kit, internal cables, a custom seatmast top, thru axles and loads of tire clearance. And the painted-to-match pump is in fact a Silca Impero. For the big and tall crowd there is the Dirty Sixer. The little girl wonders if she'll grow tall enough to fit it. NAHBS 2016. © Cyclocross Magazine

The Dirty Sixer 36" wheeled bike we spotted is an interesting solution for tall riders. Billed as "the only big 36er bike fabricated from the ground up for tall riders, by tall riders" it is endorsed by the National Basketball Retired Players Association. The company is running as a Kickstarter campaign and has investor pricing listed and says that the bikes can be modified for however the purchaser is going to ride, be it as a cruiser, MTB, road bike or yes, a cyclocross bike. The model we spotted at the show was built as an MTB with a suspension fork.

While we already showed you details on the Gold Country from Chris McGovern of McGovern Cycles, we did make a trip to go see it at the show and say hello. The bike was stunning in person. Tim O'Donnell's Shamrock Cycles out of Indianapolis, Indiana, is a show favorite for many, with detailed builds and catching paint. this year we were drawn to the nearly turquoise blue steel cyclocross race bike with a Campagnolo Record kit and cantilever brakes as well as the red and white disc brake 'cross bike built as a do-it-all racer with a SRAM Force 1 group. Squid Bikes pulled out all the stops including their own version of the Chiquita banana sticker to go with the banana paint scheme. NAHBS 2016. © Cyclocross Magazine

Finally Sacramento, California's own Squid Bikes, which were seemingly all over the show (including at the TRP Brakes booth), displayed a very unique, even for them, bike in the form a banana-themed cyclocross bike. Complete with a re-imagined Chiquita sticker turned Squid logo, the banana bike also featured Gevenalle's new shifter offering for the 11-speed crowd.

We have more NAHBS content coming. You can see all our coverage from this year's show right here. 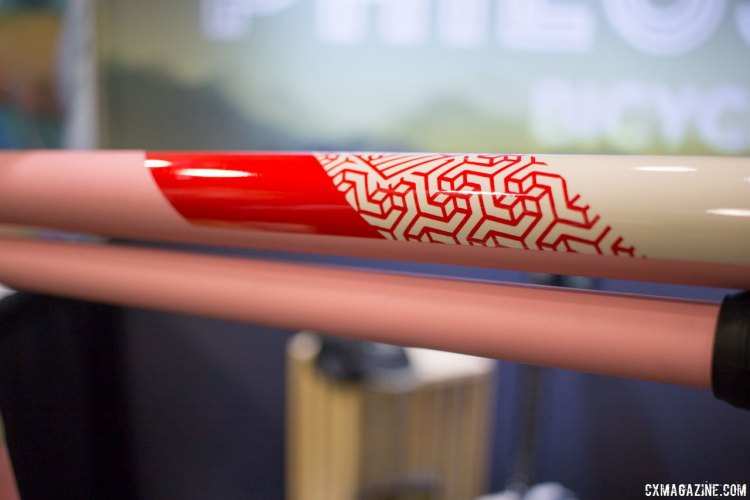