Cyclocross seems to be growing in popularity locally, with the C1 event preceded by a well-attended amateur race featuring some promising talent and local crowds enthusiastically watching every race in this mid-week event.

As the earlier amateur racers cleared off the course, women of 11 different nations took to the line vying for the first win of the season. Bianca Van den Hoek (Rijwielpaleis Bilthoven-Mtb Licht Verzat, Netherlands) made the most of her front-row start to take an early lead off the cobbles and into the winding initial corners. The dusty conditions caused a couple of minor crashes in the pack and by the time the race entered the riverside traverse, Emily Kachorek and Ceylin Alvarado had already broken away and were building a big lead on the other riders. Kachorek looked in control in front but couldn’t shake her young follower, who never fell more than a few feet behind right up until the final lap. 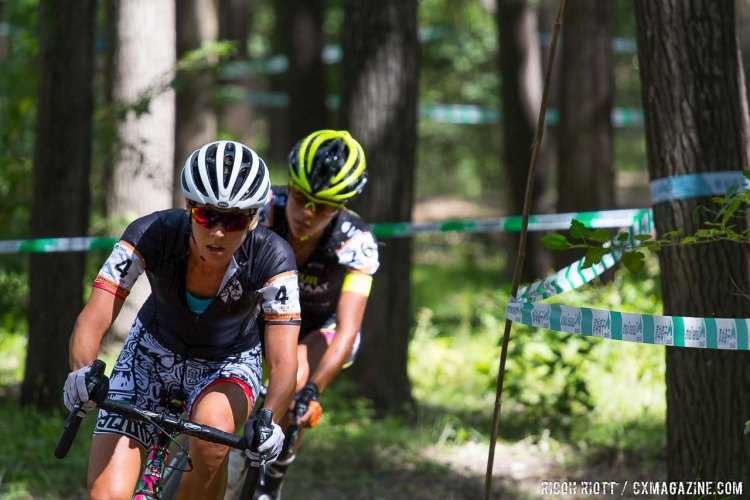 As the last lap began, Alvarado made her move and deftly passed the American to take to the front. With echoes of her bell lap battle with Asa Erlandsson (Sweden/Haibike, Sweden) at the Hainan station last year, Kachorek fought back, and the two swapped the lead several times as the minutes ticked down towards the finish.

In a final push towards the line, Alvarado couldn’t hold on and it was clear as Kachorek rounded the final turn that her first UCI C1 win was secure. It was a gratifying return trip after her near miss in China in 2015. Echoing last year’s second station in Hainan, heat and hydration were talking points among racers and many carried bottles during the race. By mid-afternoon, the men’s start temperatures had climbed higher still. With a good position crucial for the first lap, racing was fierce right off the line and Australian National Champion Chris Jongewaard established his intentions quickly, leading the race over the first technical stair section. The bunch quickly fractured along the fast river bank traverse with Marcel Wildhaber (Scott – Odlo Mtb Racing, Switzerland) controlling a pack of three including Peeters and Jongewaaald for the first lap. Chris Jongewaard is first up the steaps at the start of the first lap in Yanqing. Qiansen Trophy Race #1, China. © R. Riott / Cyclocross Magazine

Once Peeters made his move he was resolute leaving the others were battling for second. His lead only increased as each subsequent lap ticked over.

Position shuffling was constant, with early contenders including Japan’s Masanori Kosaka (Suwako Racing Team) finding themselves further down the list on the finishing straight. Ageless Thijs Al (Qiansen Pro Cycling, Netherlands) and Marcel Wildhaber rounded out the top five in a well-fought race. “It was still a very hard race because the air here is very dry and the course seems easy but it isn’t…it’s pretty tough.” Peeters told Cyclocross Magazine after the event. As China’s premiere cyclocross event, the four-year-old Qiansen Trophy is going from strength to strength and presents courses and fields well deserving of UCI C1 status, as well as encouraging local support and participation. The second station near Beijing region Changxindian takes place in a few days and will no doubt offer just as engaging a race as in Yanqing.

Full 2016 Qiansen Trophy Cyclocross Race #1 results are here and within the slideshow below.