In the third annual Qiansen Trophy C1 UCI Race, the first of a two-part C1 race series in China, Weitse Bosmans (BKCP-Powerplus) of Belgium and Katrina Jaunslaviete of Latvia both stormed to victory in the Men's and Women's Elite Race, respectively. In the Women's Elite Race, Junior French National Champion Laura Perry shot off to a stunning start to take the holeshot and create a quick gap. Katrien Thijs (Qiansen Team), Christine Vardaros (Stevens - Malten/Niner), former winner Margriet Kloppenburg (inthemud.cx) and Emily Kachorek (Squid) led the chase to the first set of log steps, which careened back into a descent and back into another set of logs steps. In the Men's Elite Race, Bosmans attacked right from the start, creating a quick gap, racing in the style of his teammate, current World Champion Mathieu van der Poel. Although Bosmans had been suffering from Lyme disease last year, he started off this season displaying impressive form.

Bianco told Cyclocross Magazine's Vardaros that he attempted to attack in the group for third place, but found that he didn't have the legs to keep away. Within a half lap, Radomir Simunek (Corendon-Kwardo) got around the group on the longest climb on the course, and created a 20 meter gap, which he held until the finish. Bianco couldn't bridge up and took fourth, while defending champion Al rolled in for fifth, his first loss in China, but an impressive ride for the retired racer. 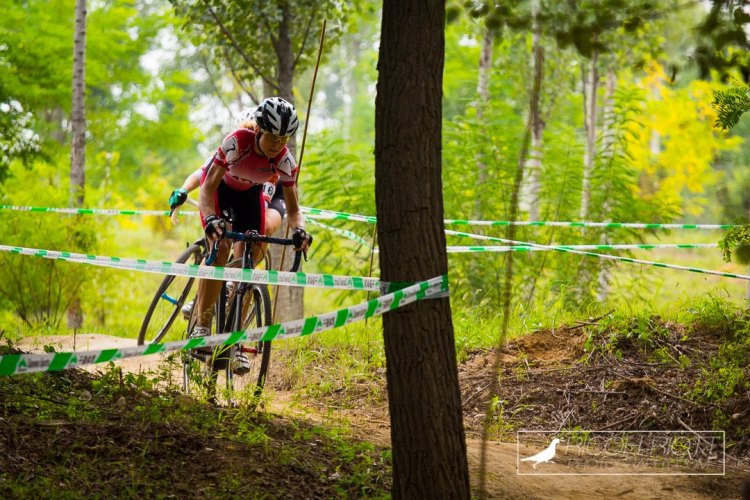 Jaunslaviete wound her way through the trees, eventually making contact with the lead group and winning the race. © Ricoh Riott