Philadelphia’s Favorite Swiss Races His Heart Out in U23 Worlds For the past two cyclocross seasons, Swiss U23 racer Valentin Sherz has come stateside  as part of Philadelphia Cyclocross School‘s cultural exchange program. Scherz tore up the mud in the Mid-Atlantic region, earning respect for his skills and friendships for his open and authentic personality. After an impressive race at Worlds, which saw him take seventh overall, Cyclocross Magazine correspondent Dan Seaton caught up with our (American) Swiss.

SANKT WENDEL, GERMANY – When American Danny Summerhill flatted on the third lap of Saturday’s U23 championship race in Sankt Wendel and fell from the front group to almost 30th place, more than one American fan started cheering for Swiss racer Valentin Scherz.

Scherz, who spent much of the fall living near Philadelphia and racing for the Cyfac-Champion System team, earned a loyal following thanks to his gutsy racing and approachability off the bike, claiming a U23 title in the Mid-Atlantic Cyclocross series.

Today, the 20 year-old – who finished 23rd in last year’s U23 World Championship race – clawed his way forward from a start that left him in the mid-20s and a long way from the front-runners to take seventh overall, just seconds behind winner Lars van der Haar.

On the finish line an exhausted and emotional Scherz said the result was bittersweet; he does not know if he will return to cyclocross’s Elite ranks next year.

“I think it was the best race of my life,” he told Cyclocross Magazine. “It’s really emotional for me because I think next year I won’t be there.”

An emotional Valentin Scherz after the best race of his life.

Scherz finished second – nearly two minutes behind Telenet-Fidea’s Arnaud Grand – in the Swiss U23 national championship race several weeks ago. Today he turned the tables, finishing more than three minutes ahead of his countryman Grand, who had already fallen from the top group before a series of disastrous laps eliminated any hope of even a top-20 finish.

After the race of his life, Scherz didn’t rule out a return, but said he wouldn’t be satisfied with half-measures.

“It’s kind of the first time I’m talking about that,” he said. “To race at this level you need to train all the year. No half-training, half-trying – I can’t do that. So it’s kind of my last big race. And I did really well.”

Because of Switzerland’s compulsory military service, which Scherz completed this spring, he said he originally didn’t intend to return to cyclocross this fall. But when the opportunity to head back to the US for another season arose, he couldn’t pass it up.

“(After the army), from July to August I had two really intense months of training. Then I flew to the US for lots of racing, which worked me back into the pace of racing. And you know I worked hard all the time, I did my job. I had a really painful month of December, but then in January I kept believing that I could do something, that I’m good. I missed [winning] the Swiss National Championship again, and then I had some mechanicals last week in Hoogerheide. But I knew that I was fit, so I just focused on resting, getting my bikes ready and training a little bit. Everything went good. During the race it was really hard to manage [my emotions] because you know just that one time to be the first at the line, to say that once I led the World Championship was something big for me.”

Scherz got that chance, leading the race after five laps. Though he almost fell out of both the lead group and the top 10 on the next lap, he gritted his way back into the mix. He credited his support system in the US with helping him put a dramatic cap on his young career.

“On the start line I was 17th,” he said, “because I was one of the [top ranked riders] in the UCI Classification. And it was because of my preparation in the US. I really want to thank everybody in the US for the season I had. We were talking about that at breakfast this morning with [Swiss National Champion] Christian Heule. We were saying that people are so nice in the United States, it’s so much fun, and we both love it. So thanks for everybody in America who does the races, organizes the races.”

Most of all, Scherz said he owed his host in the US, Philadelphia Cyclocross School co-founder Dave Berson.

“My ‘father’ in the United States, Dave Berson, was supposed to come here, but he got stuck in Philadelphia because of the snow. But I really want to thank him for my being here, because previously I thought I would go this summer back to normal life after the army, but he asked me to come back to the US and race again, and it’s because of him I’m back here now.”

Scherz has said before that racing as a professional would be a dream come true, but he didn’t know if he would have the opportunity. Now, with a top-10 result in the World Championships, he may have that chance. If not, there’s no question that he’ll embark on his next chapter knowing that he gave this chapter his best shot. 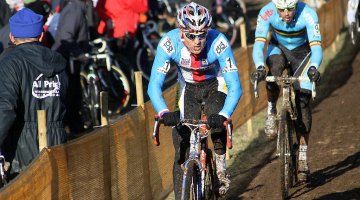