Cyclocross Magazine is heading to the big event, and should have same-day race results and photos for at least Saturday and Sunday. Visit us often this weekend for updates!

Compton, of Colorado Springs, Colo., has won the past three Women’s Elite titles and was the silver medalist at the 2007 UCI Cyclocross World Championships. The 29-year-old is currently the No. 2-ranked female cyclocross racer in the world, according to the latest UCI ratings. Her strongest competition in the 98-rider Elite Women’s field is expected to come from Georgia Gould (Ketchum, Idaho) and Kerry Barnholt (Boulder, Colo.).

A record total of 2,045 entries have been received for the nearly 40 races between Thursday and Sunday at Kansas City’s Wyandotte County Park. The complete event schedule is available at www.kccrossnationals.com.

In addition to Trebon and Compton, 13 others are defending their national titles in their category:

Several 2006 champions have moved up in category since last year:

The opportunity to purchase official race apparel, as well as download course maps, parking maps and a map of the vendor exposition is available at www.kccrossnationals.com.

About the USA Cycling Cyclocross National Championships
The best racers in American cyclocross will fight for the right to wear this year’s stars and stripes jersey at the USA Cycling Cyclocross National Championships December 13-16, 2007 in Kansas City, Kan. Four days of epic racing will take place on a technical, challenging and fast course for junior, collegiate, master and elite athletes from all over the country. The event venue will offer spectators multiple vantage points on the action, an Expo area, kids activities and beer garden. The event is sanctioned by USA Cycling and hosted by KLM Marketing Solutions.

Next post The Suffering Has Started: 'Cross Nationals, Day 1 and 2

US Nationals Racer Profiles: Cannondale-Cyclocross World’s Kaitie Antonneau Is Ready For A Title 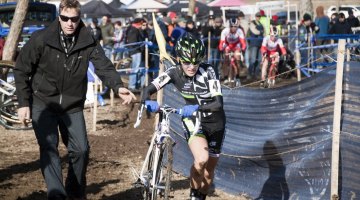 Bold Words – Thoughts on Nationals and Worlds in the US

Andy Jacques Maynes in the News: From Hospital to Nationals…