The Suffering Has Started: ‘Cross Nationals, Day 1 and 2

We’re on our way to Kansas, but have already seen lots of content from readers and riders. Since our magazine isn’t just about the top categories, we thought we’d highlight some of early content from the community during our nats cx coverage:

Larry Rosa has some awesome photos of Day 2 Racing here.

Flickr users Cardstock and Lorelei2004 have some nice photos of the course and riders practicing including Jonathan Page: 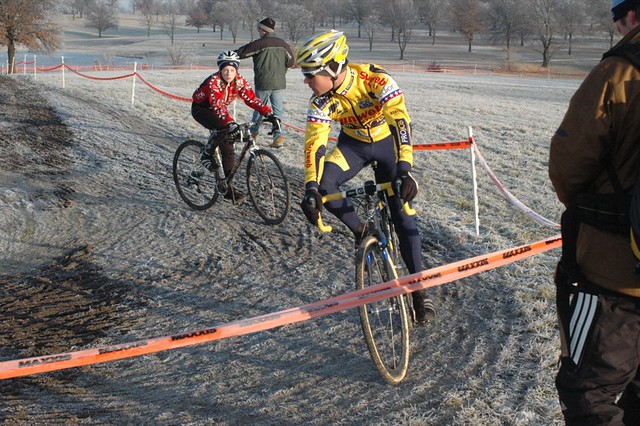 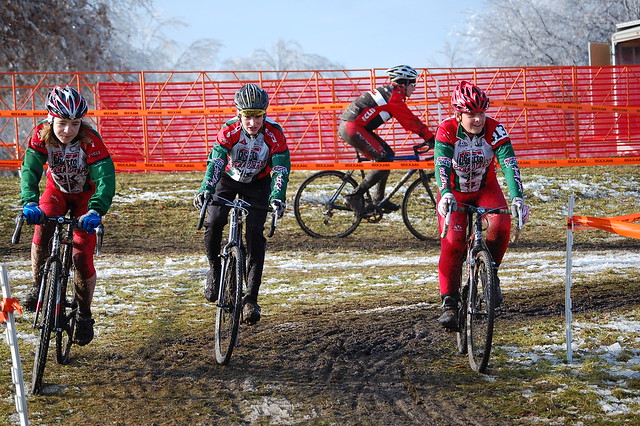 The Right to Wear the Stars and Stripes

Racers of all ages – from all cycling disciplines – showed up in droves to defend, seize, and recover national cyclocross titles Friday at the USA Cycling Cyclocross National Championships.
Competitors laid out all their skills on a harsh, challenging course that rewarded fit technicians and pain mongers alike who had to endure slippery ice and mud to take home the stars-and-stripes jersey of national champion.

Last year’s champions Logan Owen (unattached) of Bremerton, Wash., and Luke Keough (CL Noonan) of Sandwich, Mass., each moved up an age category, and, showing that age is only a number, Owen rode away with the Junior Men 13-14 title while Keough collected the Junior Men 17-18 crown.

Rivera, Keough, and Tilford each edged out their rivals to snatch the coveted holeshot. But it was defending national BMX champion, 11-year-old Austin Vincent (unattached) of Weatogue, Conn., who called upon his dirt bike skills to take the holeshot by a proverbial mile.

“I had the explosion out of the gate and it’s all sprinting (like in BMX) – that helped me,” Vincent said. “I’ve had the holeshot on every race except for two races, when I had trouble at the start.”

Crashes were aplenty Friday, with Vincent saying he went down five times on the deeply rutted course carved out by the previous day’s races that had frozen overnight. The conditions got the best of the Junior Women – most of whom lacked the weight to overcome the rigid tracks – as they led off the first of six races at 9 a.m.

“It was a cheese grater out there,” Rivera said. “You had to use your body to try and keep up and keep your bike upright. I tried not to stay in the ruts; I tried to cross them perpendicular and make sure I don’t get stuck in them. I just kind of glided over and used my body to help stay upright.”

The Future Of ‘Cross

Only 15 years old, Rivera already holds 16 national titles in road, track, and cyclocross and shows no signs of giving up her pursuit of global dominance. While American women have posted consistent top results on the world’s stage, American men have struggled against the tide of talent flowing from Europe’s northern nations. Keough, 16, heralds the second wave of top ‘cross talent by taking cues from fellow local racers Tim Johnson, Jesse Anthony, and Jeremy Powers. No stranger to tough conditions, he shed his rivals early and by the end of the first lap, had already notched a 12-second lead over second-placed rider, Eric Emsky of Rad Racing. Keough swung wide into the right turn on the course’s treacherous off-camber section and took the low route, while Emsky risked the slick, muddy high road.”

I raced out in Portland two weeks ago and I thought that was the worst mud you could find,” Keough said. “This stuff just put it to shame – it just sucked you in, it was slippery and sticky all at the same time.”

Noticeably absent from the lead group was Gavin Mannion (Hot Tubes), who had threatened Keough’s dominance of the Verge New England Championship Cyclocross Series and the US Gran Prix of Cyclocross. Mannion suffered a mechanical that dropped him to last place. But he reached deep and managed a sixth-place finish – just one spot off the podium.

Desire Has A Name

Competing on home turf bears extra pressure for racers who face the possibility of letting down fans and family with anything less than a victory. So it was no surprise that Walberg, 45, broke down in tears following her victory in the Masters 45-49 category.

Overwhelmed by achieving the feat she so desperately wanted, the win hardly came easily. Walberg needed to chase after a hard-charging Kris Walker (Kriegcycling.com) until the final lap. In doing so, she erased a 20-second deficit.

“I think the first couple laps I was cracked a bit,” Walberg said. “I sort of thought, ‘Ah heck, I guess I’m riding in second,’ but then I thought, ‘You know, you’ve got to let this course win for you,’ because this is a nice course for me. It’s super technical, it’s all about lines, it’s about staying smooth. Then I thought, ‘Don’t give up so easily, what are you crazy?! It’s the national championships so I got a lot more power and what really helped were all the people I knew around.”

Encouragement from the crowd fueled Walberg’s pursuit of a second national title. Eight seconds separated first from second at the end, with the remainder of the podium placers strung out over five minutes

Two years ago Maureen Bruno Roy (Independent Fabrication-Wheelworks) claimed the national title in the Masters Women 30-34 on a course that had been pounded by a Nor’easter snowstorm the day before. The muddy, icy, and technically demanding mix proved to be the perfect match for her superlative bike handling skills.So, after surveying the course Friday, Bruno Roy must have thought, “I’ll take that.” And it didn’t take long before she distanced herself from the field.

“I’m not paid and I don’t race another sport professionally, so the Masters category is really where I belong in terms of my commitment to training and racing,” Bruno Roy said.By the end of the first lap, Bruno Roy had already pedaled away from second wheel, Sally Annis (NEBC-CycleLoft), who became the target for third-place finisher Josie Jacques-Maynes (California Giant Berry Farms). Riding nearly flawlessly, Bruno Roy lengthened her lead by more than a minute to collect her second national title.

Jacques-Maynes went on to Annis to finish second, while Annis delivered team NEBC-CycleLoft its fourth podium finish of the day.

Tilford has coughed and wheezed his way through this cyclocross season, battling illnesses that have kept him from achieving top form.But you wouldn’t have known it by watching the Topeka, Kan., resident speed his way around the mud-choked course that he actually helped design. The KCCX/Verge/ Kccx/Verge/Eriksen Cycles racer captured his fifth cyclocross title by nearly two minutes over Kevin Hines (unattached). “I woke up pretty nervous today,”

Tilford said. “It’s different from when I was winning mountain bike worlds. After I won that a few times, I kind of got more of a relief than actual happiness, so I kind of quit going at that point. Cyclocross is just plain fun. “Although the 47-year-old didn’t repeat his now-legendary plunge into a small pond on the Wyandotte County course (from which he recovered to win the race), Tilford’s ride Friday afternoon was not without a few close calls.

“I got a lot of (barrier) ribbon wrapped around my bars today because I was trying to stay up on the grass,” Tilford said. “All of a sudden, you hit the ribbon and then there’s a stake. On Sunday, it’s going to be like a Belgium race. We’ll be sliding all over the place.”

And what are his expectations for that men’s elite race?

“Realistically, four or five guys would have to have pretty off days for me to win the race,” he said. “A good result for me in that race would be between fifth and 12th place. You look at the speeds and the maturity of the sport in the last three years and the way it’s going now guys are really keying in on it.”

Despite taking onboard a course barrier stake and some tape on the first lap, Shannon Gibson clung desperately to leader Cris Rothfuss in the Masters Women 40-44 category.

Incredibly staying upright through the greasy mud, Gibson plucked the tape from her wheels and ejected it – and the stake – with a javelin-like throw to the side.

Gibson, a former ballet dancer, matter-of-factly compared the incident to a recital.

“If your costume falls off in the middle of a performance, you just keep dancing,” she said.* * *Georgia Gould, resplendent in the colors of the LUNA team, was of a few elite racers spotted at the race venue Friday.When asked if she’d had a chance to ride the course, Gould remarked that she didn’t hate her husband enough to make him clean her bike more than necessary this weekend.* * *The winter storm that is expected to dump up to six inches of snow on the course by Saturday afternoon is expected to reach its greatest intensity Saturday morning.

“Visibility will be reduced to a quarter of a mile and with the wind gusting to 20 miles an hour, the wind chill will be five to 10 degrees,” said KCTV-5 Chief Meteorologist Katie Horner during the CBS station’s 5 p.m. newscast.

All races for Saturday are a go, said Race Director Bill Marshall of KLM Marketing Solutions. However, racers are reminded to allow plenty of travel time to the Wyandotte County course because of the adverse driving conditions that are expected.* * *