Nearly every builder at the 2012 North American Handmade Bicycle Show (NAHBS) today had at least one cyclocross bike on display, with many builders bringing two or three bikes to showcase.  It’s almost an overwhelming amount of eye candy for a cyclocross bike geek, regardless of whether you are a steel-barcon-shifting retro-grouch or a hydraulic disc brake and electronic shifting dreamer. Caletti is now building in titanium, and showed off this disc and Di2-equipped titanium cyclocross bike at NAHBS 2012. © Cyclocross Magazine

We’ll be posting photos, video interviews, and bike profiles all weekend, but we’ve got our first sampling of eye candy for you today, fresh off the showroom floor.

Up first are bikes from Zullo, hailing from Verona, Italy, Mosaic from Boulder, Colorado, Caletti Cycles from Santa Cruz, and Richard Sachs from Western Massachusetts.

Stay tuned for more detailed captions and company info, but feast on these early images: Zullo might just be one of the oldest builders at NAHBS, building bikes from the mid-70s in Verona, Italy.  Zullo has built bikes in all materials, and supplied the famous TVM team with bikes for events including the Tour de France. His progression has gone from steel to aluminum, then to aluminum/carbon and then to custom full carbon bikes, but now the builder has gone full circle and chooses to focus mostly on custom steel bikes.  He built this show Pantarei CX model out of TIG-welded Columbus spirit tubing. 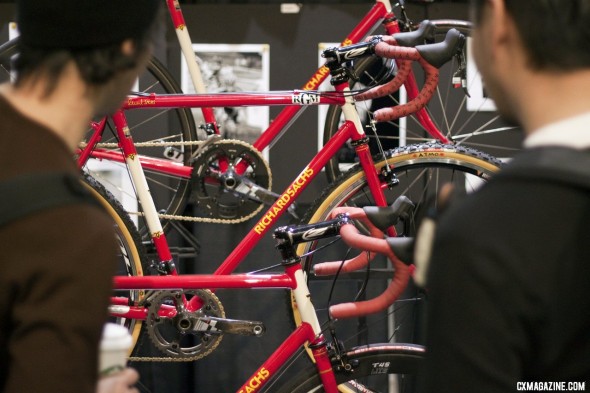 Most cyclocrossers and handmade bicycle fans need no introduction to Richard Sachs.  The builder is one of the original six builders who founded the original NAHBS, and Sachs continues to have a big presence at NAHBS, showcasing his cyclocross and road frames.  Sachs races cyclocross himself, sponsors a race team, and is very active on the cyclocross Interwebs.

His time-tested design has a long list of big race wins, including Jonathan Page’s dominant win in Napa in 2002, and while the components have changed quite a bit, his bike itself is largely unchanged. He now uses Pego-Richie Columbus tubing that he jointly developed with Pegoretti, but he still uses 1″ steerers and avoids the latest bottom bracket trends like PF30 or BB30.

Want one? Be prepared to wait, as Sachs has an infamously long waiting list. Santa Cruz’s John Caletti is a big mixed-terrain cycling fan and also does a bit of cyclocross racing himself. His bikes reflect this riding style, and the builder brought two cyclocross bikes and an adventure road bike to NAHBS to showcase his various options for the cyclist who likes to venture off the beaten path. The orange steel cyclocross bike represents his more “standard” steel offering for cyclocross racers and is his entry into the Best Cyclocross bike category, while the second offering, a titanium, disc and Shimano Di2-equipped cyclocross bike represents both his latest material and the latest in components. Caletti took advantage of Calfee’s internal seatpost Di2 battery, and made all wiring internal, for a super clean look. To charge the battery, you just plug in the charger into the jack on the seatpost.

Caletti loves disc brakes, especially hydraulic discs, but because he feels the technology isn’t there yet, he instead opted for Avid BB7 mechanical disc brakes for this show bike (soon to be his personal machine). Boulder, Colorado’s Mosaic Cycles brought two cyclocross bikes to show off, a titanium gold-accented Campagnolo-equipped racer with an integrated seat mast, and a steel woman’s model co-branded by Girl Bike Love, a website dedicated to supporting women’s cycling. Each bike purchase triggers a donation to the nonprofit Boltage, and other models are in the works.

Check back soon for more details on these bikes and the builders!

Previous post It's a Tie: Cyclocross National Championships Move to Boulder, Austin and Asheville for 2014, 2015, 2016