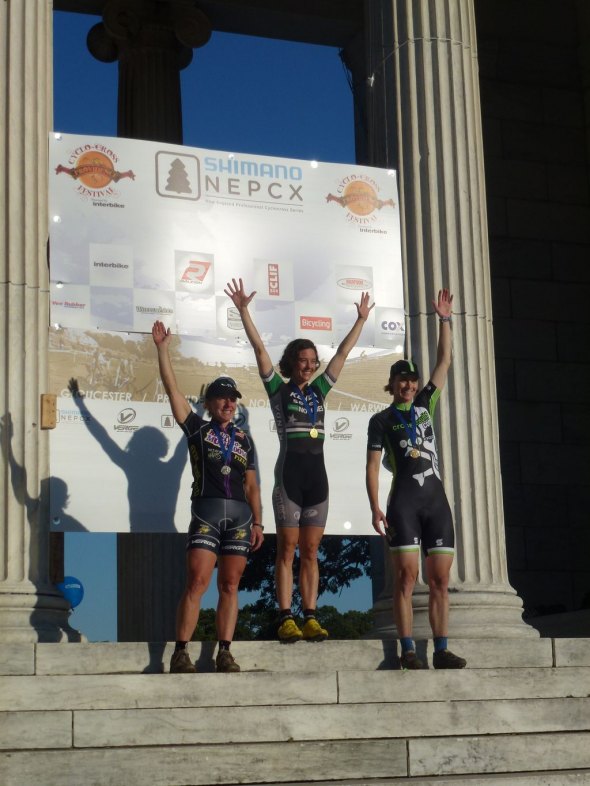 Van Gilder, McConneloug and Annis on the podium.

Mary McConneloug took Laura Van Gilder in a sprint for the line, after the duo jockeyed with Sally Annis for the better part of the race. McConneloug and Van Gilder were able to distance Annis towards the end, leading to a two-up battle on the uphill road section to the finish.

Benefiting from the wind, Annis drove the pace at the start of the race and tore apart the field. However, even with Annis adding firepower, there were roughly ten racers in the front through the early laps. The group grew sparser as racers tired in the hot conditions. Van Gilder and McConneloug (Kenda-Seven-NoTubes) then took over pace-setting, while racers including Annis (crossresults.com-JRA Cycles), Andrea Smith (LadiesFirst Racing), Arley Kemmerer (C3-Athletes Serving Athletes) and Crystal Anthony (Ladies First Racing) stayed on the powerhouse paceline.

In the final, heated laps of the race, Annis, McConneloug, Van Gilder and Smith were all that remained of the lead group. In the pavement section, Van Gilder made her moved and McConneloug clung to her wheel.

Van Gilder went into the lead before the downhill.

McConneloug soon countered the move. “Mary attacked me coming into the side of the pit,” Van Gilder said. “I overtook her on the backside and got to the barriers first, but I had a bit of a shifting issue over the barrier and that created just enough of a gap for Mary.”

After suffering from shifting issues on the barrier, Van Gilder put in a strong move to try and close the gap.

“Mary got to the pavement first after the barrier,” Van Gilder said. However, she nearly managed to catch McConneloug by the finish. To spectators, it looked like a sprint finale.”We bumped a little at the end, but it’s just the nature of the road. It was just racing. It wasn’t anything aggressive,” Van Gilder said.

The win was McConneloug’s first of the year. Annis was able to claim third, with fourth going to Smith. Arley Kemmerer, who pushed the pace for much of the race, finished in fifth, followed by Crystal Anthony. Throughout the race, Anthony was pointed out as New England cyclocross royalty, thanks to brother Jesse Anthony’s successes in cyclocross and subsequent recent retirement from cyclocross to pursue a career on the road this year. Seventh was other hometown favorite, Mo Bruno Roy, who suffered a crash on Saturday that knocked her out of the lead group.