With nominations for the positions available on the USA Cycling Cyclocross Committee closing in just a few days, we’re bringing you the second candidate statement, Stu Thorne of CyclocrossWorld. Voting begins July 15, so read up!

Kaitlin Antonneau grabs a clean bike from cyclocross guru Stu Thorne on her way to an Elite silver and an U23 gold at Nats this year. © Cyclocross Magazine

Over the past few decades, cyclocross has transformed from an obscure, off-season element of cycling, in which few people participated, to a large sport that draws often-enormous crowds to many events. The growth has been steady. Racer participation has risen greatly across the country; and more races, both at an international level and a grassroots level, are being added to an already packed schedule. Cyclocross is on the cusp of becoming a prominent discipline of cycling. It is very apparent that this intriguing sport is currently in somewhat of a transitional phase. The unfortunate loss of the USGP of Cyclocross was a major blow that eliminated a primary player from the sport. However, hosting the World Championships this past winter was a monumental step forward for cyclocross in the United States. I believe cyclocross is ready to undergo major advancement in order to carry forward with its growth. We need to keep the momentum going.  A structured plan and diligent organization is the best approach to continuing the necessary progression of the sport.

As an at-large member of the USAC Cyclocross Commission, I think it is important to have a voice from someone who has been a part of the US ’cross scene in various aspects for the past 25 years. That person should be someone who has witnessed the growth and success of cyclocross in the US, and can help shape and guide the continued growth and success in the years to come.

I have been involved in many ways with the sport since I first raced a bike in 1988. I raced all over New England in the early years. I made the haul to wherever Nationals was held each year. I learned a ton about myself and what it takes to compete week-in and week-out during the fall and winter months. I was a racer and understand what it is to be a racer.

During those early years of racing, I founded and was president of the local cycling club. As you can imagine, we had a strong focus on ’cross racing. I was instrumental in getting one of the local cross races in the area on its feet. We set up with very basic infrastructure and just over 200 racers came out to race. That race today continues to be one of the best races on the East Coast with approximately 600 racers from the US, Canada and Europe doing battle each day over the course of the weekend.

I also worked for the former Super Cup of Cyclocross series from 1997-2000 producing the first US National ’cross series. This series was the precursor to the USGP series; pitting racers from around the US against one another in locations across the country.

In 1999 I started Cyclocrossworld.com, an online retailer dedicated to the sport of ’cross. We sponsored races such as the USGP, GP Gloucester, So Cal Cross and even the fledgling Alaskan Cyclocross series. Big and small, far and near, we supported all types of ’cross racing. We also supported top-level pro teams, grassroots teams and individual riders with cross products. Cyclocrossworld has been a supporter of riders who have collectively won over 20 National Championships.

I have been to every World Championships since 1998 in various capacities; seven of which I was a member of the US National Team as a mechanic and another seven as the team manager for the Cyclocrossworld sponsored riders. I have also attended numerous World Cups and other races throughout Europe during this same time period.

I have seen ’cross from a variety of perspectives. I have promoted races, pounded stakes, been a course designer, sponsored racers and races, managed a professional cyclocross team, washed a lot of ’cross bikes, run a successful cyclocross retail establishment and raced a few races myself. I feel that I have good outlook on the US ’cross scene. I would be honored to have an active role in the decision-making process of the sport that I make my livelihood from and that is so much a part of my life.

The Vibe is Good: Stu Thorne and the Success of the Cannondale p/b CyclocrossWorld Program 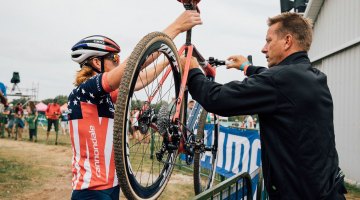 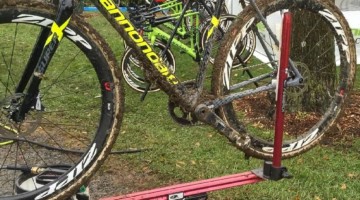