TRP Brakes has steered past being a brake-only company and now offers a thru axle carbon cyclocross fork it unveiled at NAHBS 2015.

Recognizing a market need (especially with limited availability of the Whisky Components thru axle cyclocross fork), the Tektro-owned company, which has extensive carbon production capability, has produced its own thru axle carbon fork for the cyclocross and gravel market. TRP’s Dave Biehler says the company was motivated to control the cable routing and caliper mounts on a fork and be able to optimize them for its own brakes. The cable/hydraulic hose routing is internal, and exits at an angle and position that should work perfectly with all of its disc brakes. This isn’t the case on some OEM forks, it found. Unlike the ENVE thru axle GRD prototype fork we also saw at NAHBS, TRP is keeping geometry pretty close to typical cyclocross forks, with a 397mm axle to crown distance, and a 47mm offset. The company expects to have fender mounts and a 12mm thru axle option soon. The fender mount version will be $10 more at $589.99. Stay tuned as we put one through the test. 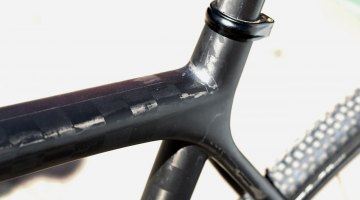