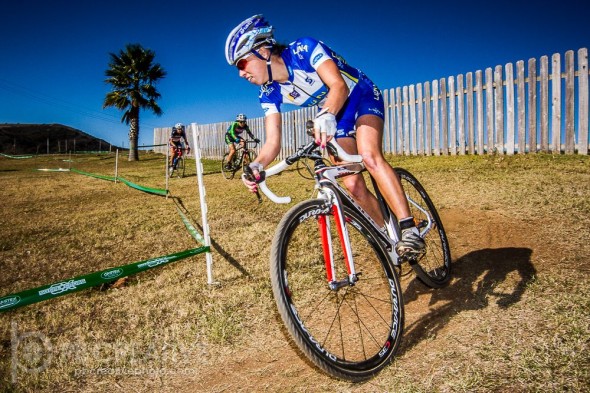 Finchamp leads Nauman and Brandt on lap one. They would end up 1-2-3 in Women’s 1/2. Philip Beckman/PB Creative (http://pbcreativephoto.com).

Four-letter words were flying during the last doubleheader weekend of 2013 CX racing in SoCal. And hats. And awnings. Small children and pets. Not to mention much of the course. The story at Lake Irvine was W.I.N.D.

It was typical fun in the sun on Saturday during the first round of the Cross Fever Series, dubbed ‘Cross Into 2014. The same dedicated crew responsible for the recently-completed SoCalCross Prestige Series dove right in for another batch of Southwestern CX stimulation — SoCalCross, Part Deux — on a hard, dry, gravelly course at a private beach club. The significant feature here was (go figure) a couple of sand sections that had riders guessing all weekend. It was a fine warmup for the next day’s Southern California/Nevada State District Cyclocross Championships. USA Cycling medals were on the line in a wide variety of divisions.

And then overnight, the winds arrived. Understand, ’cross purists may pride themselves on being able to compete in the most heinous conditions, but when the course is literally being blown away, it basically leaves nowhere to race. Much of the course tape was gone when dawn arrived, and with gale-force winds still howling, putting it back up became a significant challenge. There were enough four-letter words floating around to fill a dictionary.

The program was delayed by over an hour as officials and volunteers worked feverishly to make the event run as planned — if it could be run at all. On certain parts of the course, competitors who were brave enough to try pre-riding were being whisked off their bikes.

But with some re-routing away from those areas and a merciful, gradual subsiding of the gusts, the show did go on — albeit with some shortening of many of the classes. Conditions being what they were, many of those classes were regrettably small. Feldstein acted as a pacer for Trebon for the first seven laps. Philip Beckman/PB Creative (http://pbcreativephoto.com).

For example, only six riders lined up for Men’s CX 1/2, staged last during the fairest weather of the day. Trebon gave Gareth Feldstein (Ritte CX) some time in the spotlight during much of this one-hour, 11-lap race, then with four to go, he was gone. The lanky Bend, Oregon, native pulled away swiftly to win with more than a minute in hand. He was promptly mobbed by a pre-New Year’s dance party celebration.

Feldstein remained well clear of Jason Siegle (SDG/Felt/IRT/SPY), who was a contender during the first few laps but appeared to be falling victim to the problematic beach volleyball court. Cody Phillips (Felt) made use of his holiday break from Lees-McRae College to take fourth, while Ted Willard (G2 Bike) completed the top five.

Because Trebon was racing “out of district,” everyone behind was elevated by one position for the SCNCA Championships. That gave the gold to Feldstein, silver to Siegle and bronze to Phillips.

Feldstein knew the score: “He played nice until four to go. Ryan let me hang around for about a lap and a half and then he just went. I was fine with that. I didn’t have to beat him today. It’s unfortunate we didn’t have more guys here, but it’s still a W.”

Hannah Rae Finchamp led from wire to wire to don the gold medal in Women’s CX 1/2, although defending champ Amanda Nauman (SDG/Felt/IRT/SPY) had something to say about it. Nauman came back from a first-lap fall and put on a determined charge on the final lap to drop Nicole Brandt and reel in Finchamp with just a few turns to go in the five-lap foray.

Nauman attempted a couple of passes in a set of slow, tricky U-turns amongst a small grove of trees. Finchamp closed the door the first time, then bobbled the second time, catching Nauman off guard and causing her to take a hard fall. An upset Nauman regrouped to roll across the line 15 seconds later; she did not appear for the podium presentation.

Later, Nauman stated, “I’m pissed about it, but it’s fine. She did what she was supposed to do. If I were in the same position I would have done the same thing. It was fun, a good race. I’ll be there next weekend.”

From Finchamp’s perspective, “The last two minutes was just good, aggressive riding in the spirit of ’cross racing. Amanda tried to make a tight pass on my right at the last second before some of the final turns. I asserted my position and she was forced to fall back because at that point we were entering the final corners. We never touched. I certainly hope she did not see this as a ‘mean’ move. As someone who races UCI races, I think she would be used to people making it difficult to pass or making you earn your passes. I have experienced that a lot in UCI. On the final corner of the race, I slid out a bit and she was so close behind that she ran into me. I was able to recover quicker than her from that fumble.”

Brandt earned the bronze with third, while Ivie Crawford (Fort Lewis College) was the fourth and final finisher in this class. Next post Do You Have a Story Suggestion for Nationals 2014?