Tour of California – Crossers’ Wrap Up 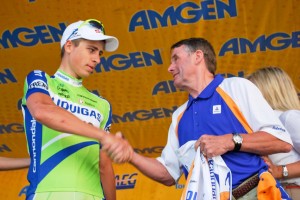 Peter Sagan claims the CX GC and the overall white jersey! Via flickr by smithcriminal29

Although the battle for the top step went down to the bitter end, with Michael Rogers (HTC-Columbia) narrowly holding off Dave Zabriskie (Garmin-Transitions) and Levi Leipheimer (RadioShack), it was Peter Sagan (Liquigas-Doimo), a 20 year-old Slovak with a cyclocross background, who distanced all challengers in the very unofficial “ToC CX GC” and was the revelation of the event. Sagan lost a minute to the other top contenders on the final stage, and slipped from seventh to eighth in the overall, but was able to cement his wins in both the young rider’s and sprint points competitions.

The final stage proved to be one of attrition, with the blistering early pace set by Garmin-Transitions coupled with the final circuit laps up and over the the five-kilometer Rock Store climb further whittling the already lean field from 83 starters to only 37 finishers. Among the casualties were former cyclocross world champ Lars Boom, who won the Most Courageous jersey for his relentless breakaway efforts in stage 4, both Jacques-Maynes brothers and Davide Frattini.

When the smoke cleared, it was Sagan adding the CX GC “title” to his list of honors, followed by Christopher Jones (Team Type 1) and Tejay Van Garderen (HTC-Columbia). Canadian Rob Britton took fourth, thanks to his consistently aggressive riding in breakaways all week long. Jeremy Powers (Jelly Belly) continued his continual progress up through the GC in dramatic fashion, moving from 91st on stage 4 all the way up to 35th by the race’s end to claim fifth in the CX GC.

*Although the official Tour of California Web site lists riders who DNF’ed in the mountains competition, we’re assuming that was a mistake.