(Escondido, Calif.) – ’Cross competitors in the Southwestern U.S. had some critical decisions to make approaching this past weekend. How does one choose between two separate events, both awarding championships, paying valuable points for two different series, at two venues separated by an hour’s drive. For the hard-core the choice was easy: do both! For the mortals among us, not so much. In any case, we have proof positive that one cannot, in fact, have too much fun.

Saturday was a landmark occasion for the SoCalCross Prestige Series. “Anza Crossing” presented by Jenson USA became the first CX event in the Inland Empire city of Riverside. Located at Martha McLean-Anza Narrows Park on a scenic bluff overlooking the Santa Ana River Valley, Anza Crossing offered participants the most technical, entertaining layout of the season. Rolling, grassy terrain featuring more off-camber corners than we’ve seen in quite some time were punctuated each lap by an exceptionally challenging sand pit. Thanks to the assistance of the Inland Empire Biking Alliance, Anza Crossing was a well-received and worthy venue for the 2014 North American Bicycle Racing Association (NABRA) CX Championships. Special attention was given here advocating road safety for “vulnerable” users such as pedestrians and cyclists. It was a theme continued the next day as well, with compelling reason (more on that later).

Under warm, blue skies, the big winners of SCPS Round 8 were the same as they were at Round 7 the weekend prior. Andrew Juiliano and Kora Colasuonno captured the Men’s and Women’s Elite A classes, respectively. In her rookie season of bicycle racing, Colasuonno (S.W.A.T.) sat back and let the small Women’s field sort itself out for most of the first lap, then put her extraordinary strength to work and powered quickly into the lead by the start of the second circuit. Fast starter Summer Moak (Felt/K-Edge), now in the Series Leader jersey, tried to hang with Colasuonno for a few turns, to no avail. Christine Pai (Knobbe Martens Intellectual Property Law) trailed in third for several laps but was eventually overhauled by the “veteran” of this group, McKenzie Melcher (Jenson/The TEAM SoCalCross). Rounding out the top five was Tessa Riley (SDBC), some two minutes behind the winner.

According to Colasuonno afterward, “The many off-cambers and sand features presented quite the challenge, since I still have a great deal to learn in the handling department, and the bumps were pretty damn intense. It was brutal, but I had a good time!” That margin grew as the laps counted down from ten, then the front trio came apart just past halfway. Juiliano, Pacheco and Roberts each rode alone, and it looked as if the results were set. But the leader was dealing with a softening tire, forcing him to the pits for a front wheel change on the penultimate lap. He reentered in third place but was able to put on a jaw-dropping charge to retake the lead with half a lap to go. Try as he might once again to score his first SoCalCross Series win, Pacheco was left shaking his head seven seconds back. Roberts rode in almost half a minute in arrears. Lundy and Behrens had the endurance to fill the remaining podium positions.

“I tried not to get too frustrated [with the flat] and decided to just bury myself the last few laps and see if I could catch Alfred, and it worked out,” stated Juiliano. “He was going good. He put in a pretty good chunk of time on me when I was in the pit. I was a little worried and actually thought we still had two to go when it ended. It’s been fun racing with him the past couple weeks.”

Full results from Anza Crossing presented by Jenson USA will be found at socalcross.org.

Next on the SoCalCross schedule is a joint venture with the SPYclocross Series as well as another round of the new California Cyclocross Series (CACX). It’s the SLO Cross Weekend in San Luis Obispo, 11/15-16. After that is the big one for these parts: the UCI CXLA Weekend at Griffith Park in Los Angeles, 11/22-23.

For more information and to stay connected to all SoCalCross PRESTIGE SERIES activities, be sure to bookmark SoCalCross.org as well as follow it all on Facebook and Twitter

Sunday morning the SoCal CX faithful gathered at Lake Hodges near Escondido for Round 2 of the SPYclocross Series. Significantly, this was the event designated as the 2014 USA Cycling SoCal/Nevada District Cyclocross Championships, which always brings out the big guns in the region. More importantly still, this event commemorated the life of popular local cycling enthusiast and advocate Udo Heinz, who was killed in a traffic accident while riding last year. So “Udo Cross” offered up abundant, compelling race action on a long course rife with variety and challenge, including deep beach sand, numerous paved corners, the SPY Flyover, and a section of crusty, desert-like trails providing something for both the climbers and descenders. There appeared to be nowhere to relax and recover, and it was gnarly enough that MTB riders may have had an advantage here. It was championship caliber, no doubt on that point.

Amanda Nauman (SDG/Bellwether/Krema Peanut Butter) has been the dominant elite female around these parts all CX season, but she had to dig deeper than ever to snag the official title this time out. Nicole Brandt (LaGrange/Michelob Ultra) used her criterium racing experience to jam past Nauman at the paved, off-camber first turn, then moments later got up the grinding sand ascent from the lake much tidier than Nauman, quickly establishing a large early lead. It was 15 seconds at the end of lap one, with Christina Probert-Turner (Turner Bikes/The TEAM SoCalCross) in third by another wide margin. 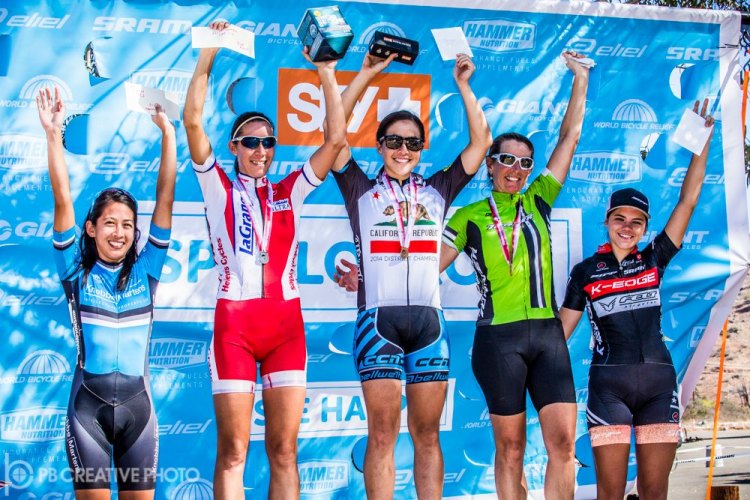 But Nauman had her claws out and gradually pulled Brandt back over the next two laps in this four-lap race. With one to go they were almost together again, and when Brandt fumbled the remount exiting the sand, Nauman needed no invitation to move into first. Nauman used her power to get away on the climb, and despite Brandt’s bike handling skills, held on to win by ten seconds. Turner rolled in next for the bronze medal, Summer Moak (Felt/K-Edge) was fourth and Christine Pai (Knobbe Martens) fifth.

As Nauman described it, “I had to keep my cool and know that I could keep picking off seconds here and there to catch Nicole. The long hill climb on the other side of the course was good for me because I could power up it, but it took absolutely everything out of me on every lap. Nicole corners like a champion and it was actually cool to watch that from behind. That was an exciting race!”

As was the Men’s Category 1 race later in the day! Forty-six-year-old, multi-time champ Brent Prenzlow (Focus/Celo Pacific) snatched a rare holeshot and gapped the strong field right away though the sand. By lap two he was among a group of six escapees, including Brandon Gritters (Rock N’ Road/Big Red Coaching), brother and teammate Kyle Gritters, Elliot Reinecke (Famous Horsemen/Focus), Brian Gordon (Blackstar) and Philip Tintsman (SPY)—the downhill MTB racer-turned-road stud who had captured the 35+ title an hour earlier. Reinecke had been victorious in the first round of the SPYclocross Series and he clearly wanted to keep the streak alive. He surged several times midway in the nine-lap affair, eventually shedding everyone but Brandon Gritters and frequent teammate Gordon (they ride for the same sponsor during the mountain bike season).

Any collaboration that might have transpired was tossed out the window when Gritters tagged “something big and hard” under the sand and needed to pit for a fresh front wheel. Gordon—celebrating his 25th birthday—attacked more than once but was calmly reeled back by Reinecke. Then on the last lap disaster struck as Gordon, on Reinecke’s wheel, was suddenly and inexplicably cartwheeling out of the race. He slammed his head into the beach at speed and was soon on his way to the hospital with a concussion. He’ll be back soon.

Reinecke cruised in for the title with one minute in hand over Brandon Gritters, Kyle Gritters, Prenzlow and John Behrens (Velo Hangar).

“It was only easy on the last lap, that’s for sure,” Reinecke reported. “I tried to ride smooth and fast but save something in the tank for the last lap. I knew Brian was kind of gassed because he was messing up the turns, so I felt OK. That was a bummer for Brian because it’s his birthday.”

Full results can be found at quickndirtymtb.com.

Next post Nash Continues her Streak at Jingle Cross, Berden Gets His First UCI Win of Season: Full Results