Fans this season have been treated to countless epic races between the last two Elite World Champs—Dutch star Mathieu van der Poel and Belgian star Wout van Aert. Despite the retirement of all-time-great Sven Nys, the actual racing excitement and drama has been at an all-time high. This two-man weekly power struggle is something the sport hasn’t seen in years. Sven Nys vs. Bart Wellens? Nys almost always had the upper hand. Erwin Vervecken and Mario de Clercq? Both Belgians won plenty of races including Worlds, but competed in an era when Daniele Pontoni, Richard Groenendaal and Adri van der Poel, among others, won plenty of races. We’re not old enough to dig deeper than that but perhaps a well-studied or older reader has an example of a similar dominant duo (if so, drop a comment below).

It’s worth appreciating what we’re watching right now. Van der Poel and Van Aert are two once-in-a-lifetime talents, showing early promise as Juniors and U23 men that not even Sven Nys’ packed palmares can match.

Van der Poel won his first two attempts at the World Championships, with wins as a Junior in 2012 in Koksijde and 2013 in Louisville, then as a first-year U23 finishing third in 2014 in Hoogerheide (behind Van Aert). And in 2015? We know what happened. “Upgrading” to Elites, the Dutch star ran away with the title in Tabor.

Van Aert had early Worlds success as well, finishing second as a Junior at Worlds in Koksijde, third as a first-year U23 in Louisville, and then winning the U23 title in Hoogerheide in 2014.

To put such early success in perspective, Nys, one of the best ever, despite his championship resume as a young BMX racer, didn’t quite have nearly the success in his teenage years, missing the podium in his first three attempts at Worlds. After a fourth place in 1994 at Worlds, 1:24 behind winner Gommers, Nys struggled in 1995, finishing in 35th, over four minutes behind the winner Mylnar, and behind racers including Iban Mayo and Americans Jonathan Page.

While Nys would go on to win a U23 title in 1997, in 1996, as a first-year U23 (the first year the UCI awarded the category), he finished 51st, four and a half minutes in arrears, behind Miguel Martinez and other recognizable names including Haimar Zubeldia, Christian Heule, Ben Berden and American Jim Savage.

And so with that in mind, for today’s Throwback Thursday post we look back at the two champion’s first big battle at Worlds in 2012, as Juniors at Koksijde, and appreciate how much they’ve achieved at a young age, and how both are still at the top of the sport nearly five years later. 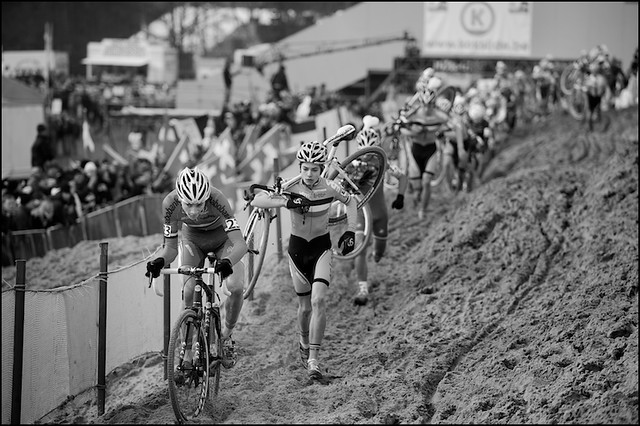 Enjoy this low-res highlight video of the 2012 Koksijde Cyclocross World Championships from the UCI below. See the full report and results here. (It’s also worth noting that most of the American Juniors on the Worlds team are now near the top of the U.S. sport as well.)

They look quite a bit younger back then, don’t they? Continue the fun history lessons with other Throwback Thursday posts here, including last week’s popular video of cyclocrossers racing down stairs and over giant barriers at the 1961 Spanish Cyclocross National Championships.

Next post Move Over SSCXWC, the Santa Claus Cyclocross World Championships (SCCXWC) Are the Latest Thing