November 2, 2009: The Tacchino Ciclocross (“Turkey Cyclocross”), the 5th round of the BikeReg.com MABRAcross Series, will be held atypically early this year on November 8.  The event also moves to a new venue this year:  Rosaryville State Park in Upper Marlboro Maryland, near Andrews Air Force Base.  The event will attract racers with a challenging course and competition as well as the “Suitcase of Sausage.”

The Suitcase of Sausage is, literally, a suitcase filled with sausage used to provide spontaneous mid-pack prime prizes throughout the day.  Lead promoter Jim McNeely sees the Suitcase of Sausage not as a mere gimmick, but also as an allegory.  “You see racing in Europe with this huge fan base of smoking, drinking, sausage-and-frites-eating and gin-swilling fans, and you realize it’s more of a mass appeal sport like NASCAR.  We tend to take Euro sports and try to convert them into competitive brie & chardonnay eating.  Nothing against brie & chardonnay, which taste wonderful when accompanied by sausage, but these sausage primes are a hit with everybody, racers and fans alike.  It’s about racing and living with gusto.”  In addition to heating up the competition among the mid-pack racers, the suitcase of sausage will offer kosher and vegetarian sausage alternatives, for those racers who want to live high off the hog, without eating any of it.

Of course, there are also rewards for finishing in the front of the pack.  The Elite racers will be competing for $1,400 in cash, with fully-equal prize money for men and women.  They can even use that money to purchase sausage, frites and beer at the race.

For racers who race a full season of road or mountain bike races before cyclocross, keeping motivated can sometimes be an issue during the short, dark days of November.  The Tacchino Ciclocross may be the solution motivational deficiency.  As Joel Gwadz said last year after winning one of the sausage primes with an inspired uphill sprint, “I’d do most anything for Kielbasa.”  For more information about Tacchino Ciclocross, race #5 of the 2009 BikeReg.com MABRAcross Series, see BikeReg.com. 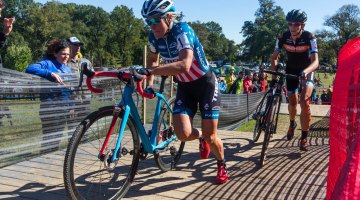