Last summer cyclocross legend Sven Nys embraced his new role as Telenet-Fidea team manager and liaison with Trek Bicycle by serving as guest groundskeeper and course consultant for the 2016 Trek CXC Cup in Waterloo, Wisconsin. In one of the videos Trek produced to promote the race, the budding groundskeeper signed off with a cryptic “retirement sucks.”

Sven’s words proved to be prophetic. Today, the two-time UCI Cyclocross World Champion officially announced the sudden end of his one-year retirement and unveiled his planned return to professional cyclocross this September at the first-ever Waterloo World Cup at Trek World Headquarters in Waterloo, Wisconsin. Although maybe not as legendary as Michael Jordan’s famed 1995 “I’m back” fax, Nys’ statement makes his intentions clear:

“Cyclocross fans, I have missed the mud, sand, and pain of cyclocross, and so today I am announcing my unretirement from cyclocross retirement. I look forward to seeing you in Waterloo on September 24 when I take on my new role as Rider-Manager for the Telenet Fidea Lions and attempt to take my first American World Cup.” Nys got enough of a taste of mud in Portland to want to come back for at least one more year. © Ryan Richardson

Het Nieuwsblad is reporting that the Belgian federation has already declared its willingness to add Nys to the World Cup team, stating Nys’ second place finish at the 2016 Singlespeed World Championships in Portland, Oregon provided all the evidence it needed that the cyclocross legend is still capable of competing at the highest level of the sport.

Sven Nys has had a typical and not-so-typical cyclocross retirement. After helping design the course for the Trek CXC Cup and cutting a preview video that shows he can still rip it, Nys spent much of the 2016-2017 season staying involved with cyclocross by managing the Telenet Fidea Lions team that includes European Champion Toon Aerts, young phenom Quinten Hermans, legend Ellen Van Loy, and new acquisition Lars van der Haar.

The not-so-typical was the opportunities Nys took to satiate his still-burning competitive fire. The Belgian headed to Portland in December to race his first SSCXWC, where he finished second to the not-yet-retired defending champ Adam Craig, and this past week he completed the eight-day Absa Cape Epic mountain bike stage race in South Africa in South Africa, finishing 40th. We also learned from Nys that after his success at SSCXWC, he has been holding his own against some of Europe’s top riders during secret early-morning training sessions outside of the Sven Nys Cycling Center in his hometown of Baal.

Always fun If I can do some trails. #svennyscyclingcenter @trekbikes

The Vader of Cyclocross Returns

Cyclocross Magazine spoke with Nys via Skype while he was in South Africa [stay tuned for the full exclusive interview] shortly after he finished the Cape Epic and signaled his cyclocross unretirement. Said Nys, “I first got the idea for [the comeback] after doing Singlespeed Worlds. I think I did quite well there and it was fun to compete again. After good sensations during morning sessions at my bike park, I felt I was ready to race again. I never won a World Cup in America, so I think Waterloo is the perfect chance to try to get a victory.” He then added, “The podium cheese curds would be nice too…less scary than the tattoo and Golden Speedo I sadly missed at Singlespeed Worlds.” Sven Nys is all smiles after coming close but not winning the obligatory tattoo at the 2016 SSCXWC. © Ryan Richardson

When asked if he is afraid the sport and talent has passed him by during his one-year retirement, Nys acknowledged he’s coming back to different sport. “Cyclocross racing, especially at the World Championships, has changed so much in the year I’ve been gone!” Nys exclaimed. “It’s now more important than ever to have lots of wheels, derailleur hangers and old green tires like it’s 1998. Fortunately, these are skills and materials a rider acquires with age and I should now have a big advantage.”

“It’s now more important than ever to have lots of wheels, derailleur hangers and old green tires like it’s 1998. Fortunately, these are skills and materials a rider acquires with age and I should now have a big advantage.”

And what about racing against the wunderkids Wout Van Aert and Mathieu van der Poel who dominated cyclocross last season? Said Nys, “Yah, they are racing very well. The way they are riding, reminds me of me when I had, you know, [rubs hand over his head]. I will go out and race my best and hopefully add another rider up front with them and add some excitement. That’s really what I want to do, give the great American cyclocross fans a show to remember.” After a pause, he continued, “I think I am old enough to be their vader, so maybe they will go easy on me. Regardless, I chased much younger riders for six hours a day in South Africa. Doing it for only an hour will now seem easy.”

“Regardless, I chased much younger riders for six hours a day in South Africa. Doing it for only an hour will now seem easy.”

A Wisconsin Nys Vibe to the Comeback

Since first hosting the Trek CXC Cup in 2013, Trek Bicycle has gone all-in on supporting cyclocross racing in Wisconsin and now, on the world stage. Given its partnership with Nys and his Telenet Fidea team, the company is already planning around Nys’ cyclocross comeback.

In an interview with Cyclocross Magazine earlier this year, Trek communications director Eric Bjorling said the company wanted to give World Cup Waterloo its own Wisconsin vibe. In the spirit of the singlespeed Crockett they designed for SSCXWC, Trek has announced a special “Wisconsin Nys” edition (inspired by Dave Towle’s suggestion) of the Trek Boone that Nys will ride at World Cup Waterloo and all subsequent races he participates in.

The Wisconsin Nys Boone will be highlighted by a Belgian blue cow spot paint scheme, paying homage to Nys’ home country. Trek said the rest of the bike will be similar to the Trek Boone Katie Compton rode at the 2017 U.S. Cyclocross Nationals in Hartford, CT, including the new Front IsoSpeed to handle any bumpy sections the Trek course designers add to the World Cup circuit.

Are There Second Acts in Belgian Lives?

A number of superstar athletes retired in 2016, with Kobe Bryant, Tim Duncan and Peyton Manning joining Nys on the beach, but we would not have guessed Nys would be the first of that select group to launch a comeback.

When athletes retire, there is usually a good reason why they choose to step away from the sport they love. Yet after some time away, some find to competitive urge too strong to resist and choose to return to their profession in defiance of the creeping hands of time. There have certainly been great second acts in the lives of sports heroes, but more often than not, fans are left remembering the greatness that was and not the last go at showing they still belong.

Nys said he is feeling confident about his chances of being a comeback success, especially given his recent racing experiences. “With almost no training, and just one gear, I was close to beating a [now] five-time World Champ on his home turf in Portland. That gave me the confidence I still might have a season or two left in me. Plus Adam [Craig] has retired, and with a bit of training and luck, maybe I could pull off the SSCXWC and UCI Worlds double. Nobody has done that before, and I’d like to set a few records before I leave the sport.” 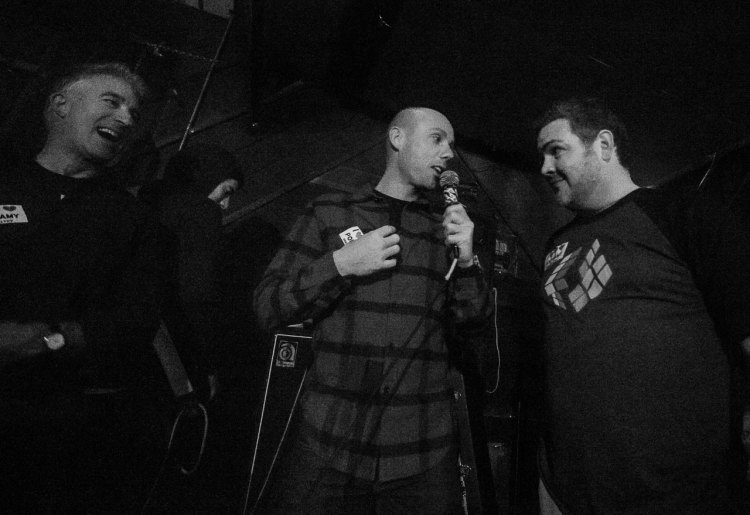 Nys explaining the joy he feels from racing cyclocross in the U.S. at the 2016 SSCXWC, and American fans should get at least two more chance to see Nys in action at the U.S. World Cups. © Dylan VanWeelden

“With almost no training, and just one gear, I was close to beating a five-time World Champ on his home turf in Portland. That gave me the confidence I still might have a season or two left in me…Maybe I could pull off the SSCXWC and UCI Worlds double. Nobody has done that before, and I’d like to set a few records before I leave the sport.”

Only the time between now and September 24 will tell if Sven Nys’ return to cyclocross is successful. Arguably one of the most beloved bike racers of all time, Sven’s return in Waterloo, Wisconsin will have eyes riveted on the small Wisconsin town and perhaps provide inspiration for Belgium’s next F. Sanne Fitzgerald to state, “I once thought that there were no second acts in Belgian lives, but there was certainly to be a second act to Sven Nys’ cyclocross days.”

Second act or not, Nys is sure to put on a show and remains confident and recharged from a year away from racing. “I’ve still got some tricks the young guys haven’t learned,” he says. “Don’t tell anyone, but I’ve been watching those great Svenness videos a lot lately. I will be ready.”

Note: This story was published on April 1. Thanks for reading.