Almost looks like Belgium, but the weather says otherwise © Light and Shadow Photography

Oceanside, CA – The sands of Camp Pendleton’s training beaches set way for the annual Storm the Beach race put on by Celo Pacific, San Diego’s premier cycling club. As usual the course required all to bring their running legs, 300 extra watts, and a bike that likes the salt and sand. While it can be one of the most painful races in Southern California, it’s also fun to try to power through the long sandy sections that require as much skill as muscle. The early morning races saw some great action and a lot of racers saw their way into double races on the day, but most retired early to enjoy the kegs of foamy love while sitting atop the bluff overlooking the course in the cool ocean breeze.

Coryn Rivera (Peanut Butter & Co. 2012) returned for another week, after her first win at Spooky Cross, to take on the beach. From the start of the race it looked like Amanda Schaper (SDG Factory) was going to lead the women off to the first fast straight, but a mistake in the first tight sand section sent her running back to the hard packed dirt and jumping in the middle of the pack. It was Megan Elliot (Black Mtn Cycles) who muscled a smooth line around the outside lane of the sand and came out on top with Rivera in second, Allison Mann (Rock N’ Road) third and Schaper fourth. The women were all together once they hit the long straight on the backside of the course until the first running section where Rivera, Mann and Elliot were able to get a gap. The battle was on up front, but the long runs and thirst for beer sent Schaper to end her race early. The three ladies battled up front as Schaper left Christina Probert (Team SoCal Cross) and Annette Padilla (Celo Pacific) to fend for themselves in the gale force winds that broke the group apart quickly.

Rivera took control of the race leading out the second lap, but the ladies didn’t let her just ride away. They all seemed to want to work together, but Rivera was able to take a small advantage for the win with only a slight gap to Mann, whose mountain bike skills seemed to be the best in the sandy beach conditions. Mann rolled in second with Elliot third, Probert fourth and Padilla to round out the top five.

Holy Horner! Or, something similar the field was murmuring as the men sprinted out of the first sand pit and onto the hard pack only to watch Chris Horner (Team RadioShack) begin to open the “wattage cottage” as race announcer Larry Longo called it. The guy has some serious power built up from all his years of racing, and he exploded to the front of the group less than halfway through the first lap. The pace split the group into three instantly, and bridging up was not an option with Horner on the pedals. By the end of lap one, Horner led the group back out, and again by the middle of the second lap on the long straight gravel road Horner delivered another dose, splitting the front group apart. From here it was Horner with Sid Taberlay (Sho-Air) and Brent Prenzlow (Celo Pacific/B&L) on his wheel. But, Horner would not let up, and by the time they hit the strip of beach coming back towards the start/finish, it was just Horner and Taberlay working together until the end. It went back and forth, “It was a battle between us for the whole hour of racing”, explained Chris Horner. “In the final sand section a mishap from Sid Taberlay opened a gap between us. I managed to hold that gap to the finish line. Not bad at all. After my win in Irvine last week, I’m two-for-two for my cyclocross season.”

With Horner grabbing the win and Taberlay in second, Prenzlow had to really work for third, holding off the hard charging Bailey Bikes riders John Behrens and John Bailey who came in to finish off the top five spots. 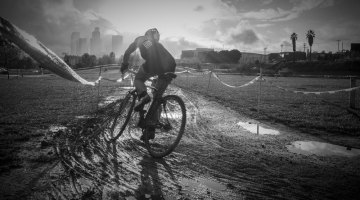