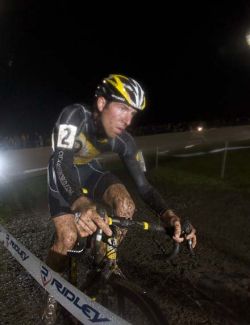 Despite earlier weather reports of sun and past years of dry racing, it shouldn’t be a surprise when a major ‘cross race comes to the Pacific Northwest and it rains the whole day. Racers awoke to a drizzle that grew increasingly stronger and was a constant rain by the time the first race, the women’s 3/4 race, started at 2:15. The mostly-grass course was slick and soggy for that first race, with the nearly 70 riders coming to a halt at the first run-up after several riders went down in a challenging hairpin before the logs. But it wasn’t just the mud and the grass that proved to be treacherous; the wet and mud-greased velodrome would cause problems for not only the amateurs but the pros as well. What would have been a fast grass crit had conditions been dry became a true test of bike handling skills in every turn.

The early rains kept the crowds at home, with small crowds watching the early races, but as the big events neared, spectators came out in force, braving the rain and mud, and gladly paying a $5 entrance fee to watch the races and enjoy the festivities, which included a beer tent, door prizes, bratwurst stand and espresso cart.

Ryan Trebon (Kona), seen prior to the race in his parka zipped up to his nose, wasn’t really psyched with the early season weather despite living in Oregon. His more laid back teammate Barry Wicks didn’t care. Nothing seems to bother the other half of the Kona twin towers. And you can be assured that Tim Johnson (Cannondale / Cyclocrossworld.com), who revels in the worst conditions, was excited with the rain and the mud, despite he and his teammate Jeremy Powers not having their Dugast Rhinos mud tires for their event. Wicks and Trebon did, as they await their Challenge Fango tubulars that they plan to ride the rest of the season.

The woman’s race was animated with a motivated Sue Butler (MonavieCannondale.com) and Wendy Simms (Kona) doing battle once again. The two piloted teams earlier this summer to take second and first in the mixed category of the BC Bike Race. Butler took the holeshot, dragging Simms with her, and soon it was a two-woman race. Butler may have been motivated by the Cyclocross Magazine hotlap prime, given out the first lap leader in every category. Last year’s winner Wendy Williams (River City Cycles) struggled to keep pace but latched onto a group of six led by Josie Jacques-Maynes (Specialized / KMC / Cal Giant) to give chase. It was futile though, as the leading two kept pulling away.

Simms had an early bobble on lap two, but Butler was content to keep a steady pace this early in the race, letting Simms catch back on. The two would trade occasional attack, with Simms seen accelerating out of the corners and Butler powering through the flats and off-camber sections. On the last lap, a late surge by Butler gapped Simms, giving the Portland-based 35+ Masters National Champion her second career win in the Elite ranks. Kathy Sherwin (Velo Bella / Kona) led the chase group home, beating Dawn Anderson (Everti / Oak Bay) for third. Jaques-Maynes, the reigning 30+ Masters National Champion, finished in fifth.

For the first time of the night, the rain let up just before the start of the Elite Men’s race at 8:00 p.m., but the damage to the course was done, and each of the contenders would suffer falls or mishaps before the night’s end. First to be subject to this fate was Andy Jacques Maynes (Specialized / KMC / Cal Giant). The ’06 Star Crossed winner lost over a minute with a first lap mechanical but eventually powered through the course and the strung-out field to a top ten finish.

Upfront, Barry Wicks, who plans to stay stateside again this year and race only through the national championships, grabbed the holeshot, with former Danish National Champion Joachim Parbo (CCV / Leopard Cycles) hot on his heels. Wicks said he was “just determined to stay out of trouble on the first lap,” successfully did just that, but on the second lap, crashed leaving the velodrome, and then crashed again while trying to remount his bike. While he was laughing about it when recalling the event to Cyclocross Magazine, it would prove to be a costly error, as he would never regain the lead.

While Wicks was down, the final selection was being made up front, as stars-and-stripes clad Tim Johnson, along with Jeremy Powers, Ryan Trebon and Beijing Olympics participant Adam Craig (Giant) took off and traded attacks. Tim Johnson said he and Powers “had a lot of fun” teaming up against Trebon and Craig, and their advantage would increase when Adam Craig slid out dramatically (video here) while trying to climb up the velodrome’s banking to gain speed prior to a slick corner.

Powers surged to the front, putting in attacks in attempt to soften Trebon’s fresh legs. The tall Kona rider took some time off from mountain bike racing later in the summer, and has been ramping up for ‘cross and a late European season. But Trebon was unphased, often gapping Powers while accelerating out of hairpins with ease. Johnson seemed content to let the two battle, but then took his own spill and had to ride to the pits to switch bikes.

Trebon and Powers were briefly rejoined by a determined Craig, but the Giant rider was clearly spent from the chase effort and could not match the accelerations of the leading two and faded shortly after. While Johnson gave chase and passed Craig, the winer would come from the leading two.

But the final lap would prove confusing for both the the riders and spectators. Trebon, still bumming from his last domestic ‘cross race where he collided with a rider out of contention, came up on a lapped rider and the two collided, taking Trebon out. Meanwhile, Powers crossed the line, unsure of how many laps remained and continued on until the announcers shouted that he had won. Trebon flew through the finish, but angry at his misfortune, threw his bike down in disgust. He told Cyclocross Magazine he regretted losing his cool, but was frustrated by the fact that the collision with the lapped rider cost him the race.

Johnson came through in third, saying he “felt a bit flat” but was still smiling. Craig, always the showman, bunny hopped the tight barriers on the last lap to please the crowd and roll into the finish in fourth. Wicks rounded out the podium for 5th.

Photos below. See videos of the racing throughout the day here.