It’s Thanksgiving Holiday in America, and here’s something that cyclocross racers should be thankful for, and something they can do about it. Imagine you’re scared, hungry, confused and have no real safe place to live.  Imagine also that you’re only four years old. Where would you turn? Dr. Frank Troiano, an Indianapolis Internist and Gastroenterologist, believes that cyclocross is part of the solution to generating awareness and additional income for the city’s St. Mary’s Child Center. Dr. Troiano is promoting the St. Mary’s Child Center Cyclocross at the Fort Benjamin Harrison State Park just outside of Indianapolis on December 4. The race, along with the following day’s Brookside Cup, comprises the Indianapolis Double Cross weekend of racing that comprises the final weekend of the 2010 Zipp OVCX Cyclocross Tour presented by Papa John’s.

The beneficiary of the race is the St. Mary’s Child Center. To an outsider, the name sounds like a children’s hospital, but St. Mary’s is currently a smaller organization that is focused on helping young children between the ages of three and five who are at great risk for a wide range of social, emotional, economic and environmental problems. The children the center serves are in their very-important formative years, yet are too young for the educational system to help, and too old for most early-age programs. With approximately 10,000 children at risk in the Indianapolis area, St. Mary’s wants to expand upon the 185 children currently enrolled in St. Mary’s programs.

“Our primary goal for the first year of the race is to raise awareness,” says Dr. Troiano, an active triathlete and occasional cyclocross racer. “There are always extra start-up costs in the first year of a new race like this. But starting next year, the goal is to raise money for St. Mary’s.” It costs over $7,500 per year to help one at-risk child through the center’s nationally accredited program, but studies show that it’s money well spent. Researchers have estimated that for every $1 spent on high-quality early education, there is a savings of $17 in reduced future intervention costs.  “Beyond that,” says Troiano, a father of four, “what’s the value of a child’s life?” Troiano has built a website for the race, www.StMarysCyclocross.com, which covers many of the details of the race and the mission.

Troiano is also introducing an innovative non-competitive “Social Cross” event at the St. Mary’s Cyclocross. Coming from the world of triathlon and running, Troiano realized there was a need for the cyclocross equivalent of the “1-Mile Fun Run” that often accompanies fundraising 5K and 10K footraces. The non-competitive “Social Cross” class is being promoted to bike riders who want to participate, but don’t feel they are ready for the handlebar banging action of a true race. The “conversational pace” ride takes place at 3:30 pm and is rumored to include the 89-time cyclocross champion of the North Pole (a record somewhat tainted by the fact that all the other residents of the North Pole have to work double overtime in December and are too short to lift their bikes over the barriers anyway). Other special guests of the St. Mary’s Cyclocross will include Indy 500 driver Tomas Scheckter and the Mayors of both Indianapolis and Greenwood, Indiana. 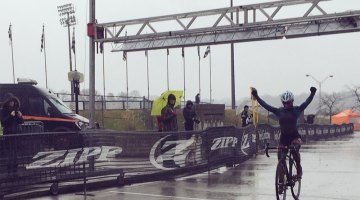