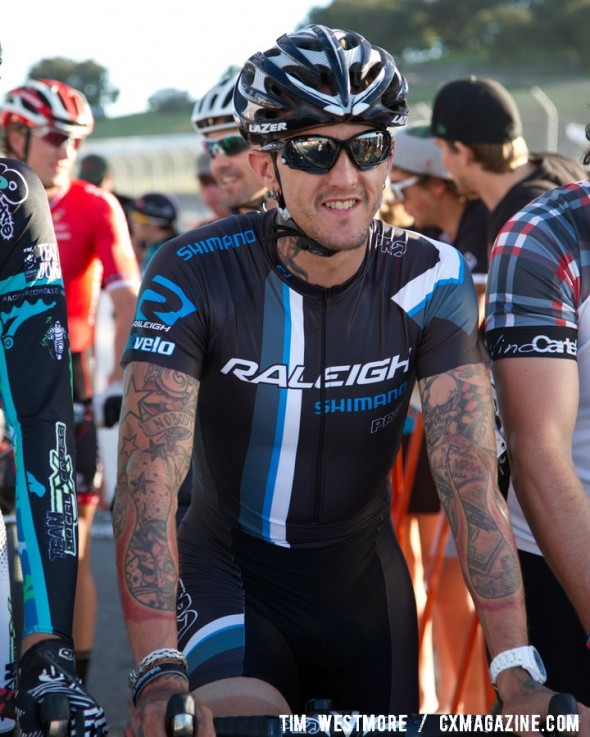 Ben Berden in full Raleigh kit, on a Raleigh RXC Pro, but not quite signed by Raleigh yet. ©Tim Westmore

April cyclocross? In 80 degree weather? On a race car track?

While many of us haven’t yet fully cleaned our bikes from the 2011 season and are just starting to think about some real off-season riding, some hard-core cyclocrossers and about a dozen pros came out to sample the first-ever cyclocross race at the 2012 Sea Otter Classic in Monterey, California, hosted by Raleigh America.

On paper, it makes sense. The Sea Otter Classic has long held almost every other discipline of bike racing, from four different types of road racing to cross country and gravity mountain biking, and now road and dirt gran fondos.  And so when Raleigh approached the Sea Otter Classic organization about a potential race, the answer was a resounding, “Why not?”

While Worlds and Euro racing (and Nationals) extended into 2012, Sea Otter’s inaugural cyclocross races today might be considered the first of the 2012 racing season, though we won’t see another until Midsummer Night’s Dream in Utah, and the season won’t officially start until CrossVegas in September. The event did not draw the typical NorCal cyclocross crowds that number 500 or more, but it did lure industry folk, some local racers, a dozen motivated pros, enthusiastic beer garden fans and even a first-time cyclocrosser named Darius Brown from Tampa, Florida.

Despite the small fields, even in the early races, there was some incredible talent, with 2012 Singlespeed National Champion Kari Studley taking the singlespeed women’s win and 2012 National Champion and Masters World Champion Don Myrah winning the Masters 45+ race. (See bottom of the page for an interview with Don Myrah.)

The brand new cyclocross course swept around the “lake” portion of the raceway, and included a quick dart into the beer tent vendor area to hop over a set of barriers. Apart from the start-finish straight, very little of the ‘cross course was on the raceway tarmac. The course wound around an essentially square area to include four short changes in elevation, three uphill, and one down.

A Rock Lobster racer navigates the loose gravel off the raceway. ©Tim Westmore

There were two main “spectator” sections on the course. One section had a pseudo-flyover bridge (no underpass) that allowed spectators to watch from outside the fencing (a few fans jumped over the fencing during the men’s race for dollar hand-ups). A short in-and-out loop took racers into the “Expo” area and beer tent. This section included the barriers and was the closest-approach for fans. The remainder of the course was on the periphery of the raceway, sweeping past walls, fences, and “not-normally-seen at a ‘cross race” tyre-barriers. A couple of course sections took racers over or near the blue-and-white rumble strips designed to warn cars.

Mud was nowhere to be seen, but there was plenty of gravel as one difficult portion of the course raced through a gravel trap designed to brush off the inertia of speeding race cars. It was Laguna Seca’s version of a sand pit. The only relief to the racers was their lighter weight and a groove forming in the gravel. Nevertheless, very few racers were able to span the entire gravel-trap and having a wider mountain bike tire was a huge benefit in this section.

While not a traditional course, in talking with some racers beforehand, the common consensus about the course was just to wait and see and adapt. Katerina Nash (Luna Chix) summing up the racer’s feeling the best, saying, “Somebody builds it, we ride it…that’s the way it is.”

The field for Elite Women (Cat 1-4) was very small, with only eight racers registered ahead of the start. At the last minute they were joined by SoCal cyclocrosser and race promoter Dorothy Wong. Kari Studley (Redline) had just won her single-speed race moments before the Women’s start, and had just enough time to switch to her disc-equipped geared Conquest Team. Studley may have been the only racer to complete back-to-back cyclocross races, but she wasn’t the only racer to do a double that day. Georgia Gould, Teal Stetson Lee and Katernia Nash also raced the cross country mountain bike race earlier, with Gould winning that race.

For certain, many racers who raced earlier in the day had their work cut out for them, especially with the heat. They were greeted at the start line with some respite as officials reduced their race time for both the men’s and women’s races by 15 minutes. (Laguna Seca Raceway is situated within a bowl and the tarmac temperatures can easily increase temperatures by 10 degrees or more.)

In the women’s race, right from the start of the race, it became an all-Luna team time trial, with Stetson-Lee out in front to grab the holeshot. Soon on the first lap, Stetson-Lee was joined by her two teammates, Georgia Gould and Katernia Nash, as well as Kari Studley, racing her second of two back-to-back races. The earlier race took its toll on Studley however, and soon it was just the three Luna Chix racers pulling away and controlling the race.

They would not relinquish their hold up front as the three completed each lap as a trio. Finally, on the bell lap, Gould attacked and came onto the final straightaway, out of sight of Steston Lee, who led Nash to a Luna podium sweep.

“[The race was] really fun,” said Gould, “We had a small field, which was a shame. Our team knows cyclocross is always fun no matter what time of year it is. There were tons of people out there, tons of people cheering, it made it really fun for us.” For the most part, the crowds were one-deep at the barriers but still exhibiting the same enthusiasm seen at many of the other local cyclocross events. For the men’s race, the big name in the field was Belgium’s Ben Berden, who raced most of last season in the U.S. for Stoemper Bikes. The staging call-up was by bib number but Berden, at number 37 out of 38, was given a place in the front row for his past Belgian National Champion title. It was a smart decision, as Berden has certainly kept his form in the off-season, taking a win in front of thousands of fans at the Tokyo Cross in February, and completing the massive Stoepidest Week of training.

Berden, sporting a Raleigh kit and a new Raleigh RXC Pro carbon cyclocross bike, took advantage of his start position and grabbed an early holeshot and drilled it. Canadian Aaron Schooler would stay close in second for a couple of laps but Berden was determined to give a good showing for his (potential) new sponsor and continue his off-season winning streak. Ben Berden in control and on his way to the win at the 2012 Sea Otter Classic cyclocross race. ©Tim Westmore

The lead stretched out from a handful of seconds to 15 and eventually 20 seconds, as Berden came home with a commanding lead and victory.

“It was my first time [racing] cyclocross for a few months so it was really hard. There was a lot of people here so it was something else,” said Berden who also admitted to racing cyclocross in the summer on another race track in Belgium.

Behind him, Schooler solidified his hold on second place.

The real race and drama in the event was the battle or third. Clif Bar teammates Mitchell Hoke and Troy Wells were locked into a tight race for third for much of the 50 minutes, but with a late surge, both were overtaken on the last lap by Craig Richey.

What do you think: