Nauman won on Saturday, then wrapped up the Women’s A title with second on Sunday at Santa ’Cross. © Philip Beckman/ PB Creative

Competitors at the SoCalCross Prestige Series finale logged almost as many ups and downs as Olde Saint Nick will in just a few days. All weekend long, Santa ‘Cross was about spiraling higher into Griffith Park’s Vermont Canyon, then turning around and twisting back down. The Russian judge knocked him down a point for not being clipped in at Santa ’Cross. © Philip Beckman/ PB Creative

It presented a diverse challenge for those seeking to put a red bow on top of the 18-race season, to perhaps wrap up a championship, or just hang some lights on an intense three-month effort. Power riders had a distinct advantage escalating one way, while riders with strong technical skills shined going in the opposite direction. It made for some interesting tactics and compelling finishes.

On a gorgeous Saturday in L.A., it was Amanda Nauman (SDG/Felt/IRT/SPY) and Gareth Feldstein (Ritte CX) capturing the Elite A Women’s and Men’s events, respectively.

It was Feldstein’s first points-paying A class victory in the SoCalCross Series, in one of the most intriguing races of the season.

This was due in large part to the surprise appearance of Ned Overend — a multi-time World and National mountain bike champion, a two-time XTERRA World Champion, and the defending World Cyclocross Champion in the 55-59 age group. Overend lives in Durango, Colorado, but was visiting family in SoCal during the holidays. “I was in the area and decided to come out and give it a try,” said the Hall of Famer, who was wearing NICA Booster colors in support of the high school mountain bike racing movement. Hall of Famer and defending CX World Champ in the 55-59 bracket made things very interesting on Saturday. He did not race on Sunday at Santa ’Cross. © Philip Beckman/ PB Creative

Two laps later it appeared that Overend and Siegle were dropped under the pressure being applied up front by Feldstein and the 46-year-old Brent Prenzlow (a local ’cross celebrity in his own right). Petrov dangled in third, several seconds back.

Overend was far from done, however, and clawed his way up and past Petrov. With three to go in this 12-lapper he had rejoined the two leaders. With two to go, Overend put the fans on their feet with a hard attack at the bottom of the climb that had him into the lead briefly.

It was not to be for 58-year-old “Deadly Nedly,” however. Overend was caught by Prenzlow and Feldstein as the penultimate lap was completed. He then slid out and left the locals to contest the victory.

During the post-race interview, it seemed as if Feldstein’s win wasn’t sinking in. “It was kind of cool,” he stated. “At one point BP was in front of me and Ned was behind me and I’m thinking, ‘I’m in a legend sandwich.’ Then the next lap I was trying to do the math, wondering how old BP is and thinking, ‘The two of us combined might be as old as Ned.’” Gareth Feldstein notched a long overdue victory on Saturday, just ahead of Brent Prenzlow, who has well over a hundred wins in SoCal CX at Santa ’Cross. © Philip Beckman/ PB Creative

Overend took it all in stride, reporting with a smile afterward, “The course suited me. That’s why I was able to do that well. But these guys have more power than I do; flats power. I was making some mistakes. I slid out a couple times and threw a chain once too. But that’s the deal — you gotta be smooth. I was riding a little ragged trying to stay with them. With two laps to go I pushed the pace up the climb to see how they’d handle it, but they weren’t in that much trouble. It was fun being out front for a little while. It was nice racing with these guys, in this weather.”

Prenzlow equaled his best finish of the season, but it was clear he wanted more. “Gareth made a surprising move on a downhill that was kind of a gravely road and passed me on the inside. I didn’t expect it. I kind of went ‘Oh crap.’ Unfortunately from there the two last little uphills were short and he got to the high point of the course first and I knew it was going to be really hard to pass after that. I couldn’t make another pass so I came in right on his wheel. Second was where I got stuck. That was a clever pass so I’ll have to be happy with being close.”

In the Elite A Women’s race, Nauman had a fight on her hands early in the seven-lap exploit with defending SoCalCross champ Hannah Rae Finchamp (Luna Chix), Nicole Brandt (LaGrange/Michelob Ultra) and Christina Probert-Turner (The TEAM SoCalCross). After two laps and some hard efforts by Finchamp, it was just she and Nauman yo-yoing at the front. Nauman was able to close gaps to Finchamp while charging up the hill, but the tables were turned coming back down to the start/finish area.

With two to go, Nauman made a determined pass that would ultimately seal her seventh win of the year by just over four seconds. These two were well ahead of Brandt, who had taken a couple of spills but was able to overtake Probert-Turner in the waning moments. Sasha Perry (Swarm!) rounded out the podium.

According to Nauman, “Hannah said I should have pulled for a couple laps and I’m like, ‘Are you kidding me? I had to do so much work just to get your wheel, let alone get around you.” She’s so much better through the technical turns than I am, but there were just enough power sections that I had her.”

Finchamp concurred: “I was a lot stronger on the downhill but every time she would slingshot me on this short straightaway section and I think that was what ultimately decided the race. When she came through on the second to last lap she just totally caught me off guard for a second. That was enough.

Finchamp would have her revenge the next day. This recently crowned XTERRA Amateur World Champion snatched an early lead and was unchallenged to the end. Brandt had a role in this as she was riding in second place early then made a mistake in a tricky off-camber, which briefly held up Probert-Turner and Nauman.

Nauman appeared to be thinking about points (worth 50 percent more in this season finale; a rider’s ten best finishes counted toward the final point standings). It took her six laps to overtake Brandt—her closest title rival—for second, and by that time Finchamp was nearly half a minute ahead.

As Finchamp celebrated her first victory in head-to-head competition with Nauman, Nauman was reveling in her first SoCalCross Championship (in only her first full season of CX racing). “I’ve had some champagne so it’s even better now,” she said with a laugh. “Today was good. I’m glad Hannah got a win because her skills are there. She was taking those turns so much faster. If I try to go that fast and I take that chance…right now I just don’t want to get injured.” Nauman, Finchamp and Brandt are all going to Nationals in Colorado next month. 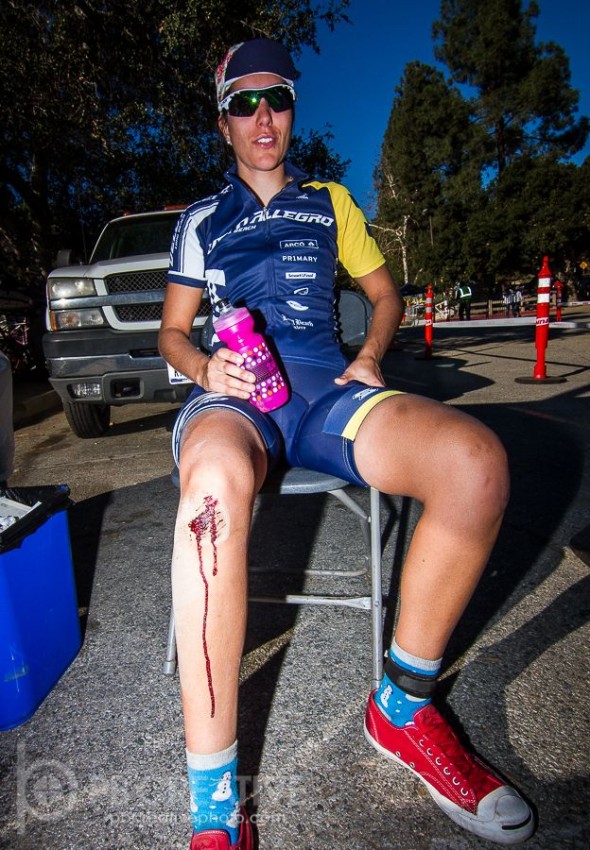 There will be blood… at Santa ’Cross. © Philip Beckman/ PB Creative

“I didn’t feel particularly strong going into the race. I was still a little fatigued from having battled it out with Amanda and coming up short by just four seconds. I was determined though. I knew that my technical skills were advanced so I had to capitalize on the cornering, but I also knew my straightaways aren’t quite as strong as the other ladies’, so I had to work extra hard on those. It was another great season and as always Dorothy [Wong, the series promoter] pulled off some fabulous events.”

Having been afforded a long late-season break thanks to a number of dominating performances before Thanksgiving, Brandon and Kyle Gritters finally reappeared on the final day of the schedule with first and second in the point standings and a plan to finish it out that way. It almost worked.

Half a lap later he was back in the front group, having cartwheeled into a tree and cracking his top tube with his left knee. Amazingly, Gritters continued on, just behind the leading Siegle. Brandon Gritters was there too, but Feldstein was losing ground.

Halfway through the fifth lap, Kyle Gritters went down hard again, sliding out on a transition between sod and gravel. He regrouped quickly but the wind had now been taken out of his sails; he would end up seventh for the day. Siegle, who had withdrawn from Saturday’s race, then put on a charge to separate himself from Brandon Gritters by roughly seven seconds. This margin held steady for two laps, and with the clock running out, the top three position appeared set. Feldstein was alone in third, ahead of a battle between Petrov and Prenzlow.

But not so fast. With three to go, Gritters suddenly came into view alone with the lead. Siegle had gotten hung up in the course tape and slipped to the turf at the top of the canyon. That was all Gritters needed as he lit the afterburners and flew away to his second consecutive SoCalCross title. Siegle crossed the line ten seconds later for second. That, combined with Kyle Gritters’ mishaps, moved Siegle into second for the season.

Feldstein completed a satisfying weekend in third, as Petrov and Prenzlow set the last podium rack.

As Brandon Gritters explained, “I was chasing for a long time and wasn’t sure if I was going to be able to make it back [to Siegle]. He was going hard and I was hurting on the hill but I made up time going descending. I’d get a little closer going down the hill and then maintain the gap going back up. Then he made a couple mistakes on one lap and I caught him. I didn’t waste any time. I could tell he was hurting when I caught him so I just went hard from there and got a little gap and kept it on the gas for the last three laps.”

Said Siegle, “It was just one of those mistakes from going hard. At the top of the hill I was seeing through a small black window and went into the tape and hit a stake. He caught up as I was trying to gather myself and got a little gap and it held the rest of the time. It was a good race. He deserved to win.” This was the most moisture the SoCalCross Prestige Series saw all season at Santa ’Cross. © Philip Beckman/ PB Creative