In the Saddle with Mitch Graham, Director of the Zipp Ohio Valley Cyclocross Series

Mitch Graham is the director of the Zipp Ohio Valley Cyclocross Series, as well as the race director of the Harbin Park UCI C1 event, part of the Cincy3 weekend of racing and one of only eight UCI Category 1 races in the United States. In addition to promoting races, he also runs BioWheels, a local bike shop in Cincinnati, organizes cyclocross clinics, manages a racing team, helps build mountain bike trails, and also gets to race a bit on occasion. Mitch was a huge support in helping to get me started racing cyclocross and it was an honor to interview him for Cyclocross Magazine.

Cyclocross Magazine: How did you get started promoting big events like the Cincy3 CX festival?

Mitch Graham: The Cincy3 UCI weekend started off as a one-day race at Harbin Park back in the mid-90’s — about 20 to 40 riders total. I was starting a new job at BioWheels, and racing mountain bikes. The previous Harbin Park promoter, Matthew Johnson, was moving out of town and he asked me — “hey, do you want to keep these cyclocross races going at Harbin?” and I thought about it and said, “Sure, why not.” Both of my parents were organizers, I guess it eventually rubbed off.

I had zero experience at that point organizing an event other than doing a very small part to help set up or tear down one of Matt’s courses. I had no idea what I had gotten myself into. Matt gave me an old blue duffel bag with about 500 rusty pin flags, 3 cans of orange marking paint, and a flattened, half-used box of safety pins — I was like “jackpot!” The first race I put on I showed up at Harbin two hours before the first race was scheduled — guessing that was more than enough time to set up the course. I had guessed wrong. That was about 12 years ago, and I still have that duffel bag to remind me of those days.

CXM: When was the first UCI race at Harbin Park? Why did you decide to promote a UCI event?

MG: Peer pressure, mainly. In 2002-2003 a few of us started really getting into cyclocross in the area. I didn’t get to travel much because of working Saturdays in the bike shop, but a few friends from the area (TJ Turner, Phil Noble, Matt Bell and Bob Bobrow) were road-tripping to Monkey Hill, Chicago SuperCup, Granogue — and they’d come back telling me all about these great “UCI races” where there was something around 60 people in a race (unfathomable at the time) and how great it was. In 2003, a few of them came back from the Michigan UCI event and were bugging me: “You must do a UCI event at Harbin!”

I called up the Michigan UCI promoter, Robert Linden, asked him who to talk to about getting this UCI-sanctioning, and he put me in touch with Adam Myerson. Adam educated me about the basic requirements and then walked me through the process getting our event on the calendar. Our first UCI race was October 2004. As the race and subsequent race weekend grew, our goal became to put Cincinnati on the US cyclocross map.

CXM: If another promoter was looking at trying to put on a new UCI-sanctioned cyclocross event, would you recommend doing it?

MG: I don’t know. It’s both getting easier, and harder at the same time, to put on these events. Easier in that the communication between promoters and USA Cycling and the UCI is light-years ahead of where it was earlier on. Harder in that with all the newer UCI events packed into the US schedule like sardines, it’s tougher to attract as many riders as you once were able to. The numbers of elite riders are not growing along with the number of UCI events. I’m not sure why that is. USAC’s new National Calendar idea shows promise, we’ll just have to see if enough promoters see value in getting their event on there.

CXM: You changed the dates of the Cincy3 races this year from early October, to early November. How do you think the new dates will affect the venue?

MG: Less heat will be a good thing. I don’t know, it’s tough to say. We’ve been on the same second week of October weekend for 7 years, we were getting used to it. It will be weird for sure. I haven’t put on a November race in years, I’ll tell you after the November 5/6 weekend is over.

CXM: When and why did you go from two to three days of racing?

MG: 2008. The idea was to save the traveling elite riders some money. The expenses of a plane-ticket, shipping bikes, rental cars, etc divided up by three days of UCI prize money and points versus the normal two days. After putting on four years of UCI double weekends, we (Doug Dobrozsi and I) learned a lot getting good feedback from the riders traveling in. One thing we kept hearing was that it was expensive to travel around hitting all these UCI weekends all over the country, and that the relatively low UCI Category 2 prize lists didn’t offset those expenses well. Nick Tinsler had been doing an OVCX Series event in Northern Kentucky for a few years, so Doug and I asked him if he’d be willing to take a risk and do his race the following year on a Friday as a UCI event. He luckily had been thinking the same thing, and having him on has really helped us build our Cincinnati weekend brand (Cincy3) and be a more cohesive combination of events. So instead of having one promoter responsible for 2 UCI races, we have 3 promoters, each responsible for one, then sharing the collective work. The three days have worked out very well for us.

CXM: What makes your event the one event someone should plan around and travel to?

MG: Most typical UCI race weekends happen on one venue, with the course switched around a bit for the second day. The Cincy3 weekend is three different venues on three established, fun courses with each their own unique character, energy and challenge. Each day suits a different style of rider. For the ADD-types (which would be all of us I presume) it’s great — we’ll guarantee you won’t get bored with the courses. Secondly, we bring in as many of the best riders in the country as possible. We saw that when we were able to bring in the top riders, our overall attendance grew by 50% that first year. It’s grown 30-40% each year since. So at this point, all of the categories of racing are super-competitive and full.

CXM: How do you go about the formula for the pay outs for women? Your events pay out more money to the women than most.

MG: We match prize money five deep between the men and women, so $10,000 in cash across three days to the women. The 2007 race woke us up to the sickening discrepancies between the men’s and the women’s minimum payouts, particularly at the Category 1 level. Even if a woman was winning both days on a weekend, she’d leave in the hole after airfare, car rental, shipping bikes on airplanes, etc. Yes some of them have sponsors covering some of that but what’s leftover to live on? Not a sustainable model for attracting more women to the sport. So in 2008 when we read Georgia Gould’s petition — it was perfect — we implemented it.

CXM: Describe some memorable race moments from past editions of the Cincy3.

MG: In 2007 immediately after winning the women’s Harbin Park race, Katie Compton (with not much more than 20 minutes recovery) was allowed to jump in at the very back with the elite men. Before she pulled off, she had already passed half of them, including all of our best regional elite riders. That was pretty cool. The 2005 men’s elite race was probably the most exciting — there was a lead pack of about 6 that traded attacks the entire race, with former World Junior Champion Matt Kelly sticking a last-lap attack and winning the race. Watching 130+ Cat 3 men rolling out in a long line at Harbin Park in 2010 — I wouldn’t have dreamed of that 10 years ago.

CXM: What’s the one thing you hope to improve upon from last year’s event?

MG: The weather. Cool and wet is what we’re shooting for!

MG: Well look at the Midwest now — you can actually be a professional cyclocross racer and feasibly base yourself out of the Midwest. Four Category 1 weekends are within driving distance.

MG: Directing the OVCX series, by a long shot. It’s non-stop working with all the event directors, registration staff, officials, riders and parents thoroughout the season. It’s also very rewarding, I think everyone involved with the OVCX series was ecstatic with the incredible turnout at the season opener down in Louisville this past week. It’s going to be a killer year.

CXM: What’s your vision for the future of US cyclocross?

MG: Hopefully it can continue down the path that it’s on. The junior fields down here in the Ohio Valley are about a year or two from completely exploding. I can’t wait to see that.

MG: It’s fun, it’s hard, and it’s easy to watch: three things that have built up quite the community here in the Ohio Valley. Race Preview: US Cup-CX Returns This Weekend with Cincinnati Cyclocross at Devou and Harbin Parks Getting Ready for the Cincy3 with the Harbin Park Cyclocross Clinic: Photo Gallery 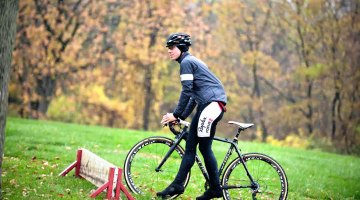