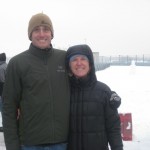 Butler is all smiles with travel buddy Trebon. Photo courtesy of Sue Butler.

Portland, OR, pro racer Sue Butler was at the Zolder World Cup this past weekend, where Katie Compton took the win for the women, and Lars Boom took the men’s. Read on for her experience of this icy race.

Zolder World Cup: No Words to Describe.
As I sit here to recall the race, I am somewhat at a loss for words. It was fun in a very perverse sort of way. It was fun, frustrating, crazy, chaotic and really a lot about luck. I had anticipated a fairly chaotic start, but it really exceeded my expectations. I was in the 2nd row and actually had a great start heading onto the snowy left hand corner. But then it started. People crashing everywhere. I was still on my bike, but someone not on theirs decided I shouldn’t be either. I was shoved into the fence, pinched at the corner running; I tried to get going, but with people running and shoving, people crashing, it was a circus. I kept pushing forward. But you never knew when someone was going to swerve into you. It happened many times that first lap. It was the luck, or unluck of the draw. When someone passes you and crashes immediately in front of you, there are just not words. Or options. You can’t run them over and keep going. You can be sailing along in the loose snow and all of a sudden your front wheel turns. Standstill. Time to start over. Then the running and starting/stopping/ crashing, you get ice built up in the pedals. Then you can’t clip in and you really can’t ride. It was impossible. I know. I tried.  Minutes of trying to get into the pedals, losing places, losing time, but still managing to stay in the game. Don’t give up. I was enjoying the challenge. It was so ridiculous, it was, well, funny? I don’t know if that is the word. There is not a word. I think I may have been in shock while racing. Finally, lap 4, I got it together. It was my fastest lap. They kept getting faster. Less people around perhaps. I could finally clip in  Maybe with one lap I could have moved up, but the laps were long. It wasn’t a matter of IF you would crash, but how often or how many people would crash into you. Really, it was an experience. It was something I have never experienced before. I consider it a win coming out of that with a few bruises and scratches. It was one for the record books. And one to leave with a confused smile on my face.

Congrats to Katie Compton who nailed her start when it REALLY counted. Thanks to Chris McKenney for his mechanical support and again, the awesome support of Family Thijs and their friends. Not to mention my awesome sponsors. Without great gear, I wouldn’t have had the opportunity to partake in this. I’ve learned a lot this race. Crash less, go faster. Looking forward to St. Wendel in January!