All good things come to an end, the saying goes, and it couldn’t be more accurate for the career of cyclocross pros. While some riders have a short career, others span several decades.

Recently, Katie Compton, 15-time National Champion and the most dominant American in cyclocross, announced her exit strategy from the sport, and tomorrow heads into the 2021 Cyclocross World Championships in Ostend knowing it’s the last World Championships she’ll race in Europe. Compton has pretty much won everything there is to win in cyclocross over her long, illustrious career, except the rainbow jersey. She’s won the World Cup overall, taken home silver and bronze at Worlds, has a closet full of stars and stripes and claimed nearly every major domestic cyclocross race over the years.

She’s also piloted countless brands of bikes to victory, hopping on Redline, Primus Mootry, Stevens, Giant and of course, countless models from Trek, including ones she helped develop.

I reached out to her for details on the decision to wind down her career after next season.

Cyclocross Magazine: Mark’s original post suggests the decision came after a rough race. What happened there?

Katie Compton: I think that announcement just came after another rough race, we had talked about racing less in Belgium pre-Covid and doing more domestic racing until I retire after Fayetteville worlds next year, but the racing has been more than a struggle this season, so we decided to let people know sooner rather than later what I would be doing in the future.

CXM: After such a long career, how did you know it was time?

KC: We decided last season for me to retire after worlds in the U.S. since that is a good time, and I’m also getting older and more tired. I’ve enjoyed racing and all the experiences I’ve had through the many years, but all good things must come to an end eventually, and I think it’s the right time. A bandaged Compton on the podium in Boulder in 2010. Photo by Mark Legg-Compton

CXM: We have seen you in the stars and stripes for so long. This season we’re seeing Clara Honsinger riding in them. How has your experience been in your own (really cool) kit? Any different?

KC: I think the biggest one is people aren’t used to seeing me in a regular kit, so I’m a little harder to pick out. I loved wearing the U.S. champ jersey for a long time, but I’m also happy to see Clara doing such an amazing job representing it now and racing at the front of races in Europe. People still get to see the stars and stripes and see that the U.S. is a strong ’cross racing country. Compton at the Lakewood Nationals, her first in 16 years not to finish first. 2019 Cyclocross National Championships, Lakewood, WA. © A. Yee / Cyclocross Magazine

CXM: On that note, what do you think of Clara’s successes in Europe?

KC: I think it’s wonderful to see. She has made great progress over the last few seasons and really stepped up with maturity and strength to be one of the top cyclocross racers in the world. She is young and continuing to improve and get faster, and I think the U.S. cyclocross scene needs to see that and have a rider like her to cheer for. The U.S. women have had good success in Europe and that’s more apparent when the U.S. champ continues to race at the front of races.

CXM: The women’s field has really changed over time, and now we’re seeing a really strong American presence in international competition. What has it been like seeing that change from within the start grid?

KC: It’s always nice to share the start with other U.S. racers and familiar faces. Racing in Europe is very hard, there’s a lot to learn and experience in order to be successful in Belgium and being able to share that with other Americans by supporting and cheering for one another makes it a little easier. When one of us does well, I feel like we all can celebrate that.

CXM: Next year you’re going to do a domestic season. Hopefully, that means we get to see you more often in regional races, but it also means saying goodbye to the Euro experience and races you’ve done so many times. How is this season going with the knowledge it’s the last dance for so many events?

KC: Yes, next season we plan to do a domestic-focused calendar. I feel like I’ve been torn between the two continents over the last few seasons since traveling back and forth for races was starting to wear on me, and I needed to focus on one or the other to continue to be successful. At this point, as much as I have enjoyed racing in Europe and all the fun that goes with challenging courses and hard, fast racing, I’m looking forward to racing familiar races in the U.S. and seeing friends and fans that I haven’t been able to race in front of for a while. I’ll miss a lot of the Euro races and courses, but I’ll leave with fond memories and experiences I can cherish. CXM: Have you got any plans for life after cyclocross?

KC: That’s still a work in progress. I’ll stay in the cycling world in some capacity since I love racing and cyclocross too much to stop completely. I’ll most likely keep racing masters and local races as I feel. I’m sure there are gravel events and mountain bike events I’d also like to do that would be fun, and I’ll continue to coach. I also want to go back to school for nursing so that is something I’ll plan out past racing. CXM: Thanks for the chat, and good luck at Worlds! 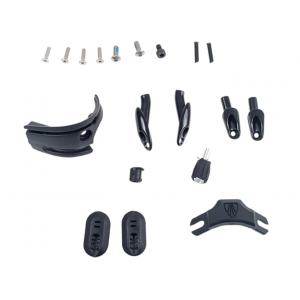 Next post Ronhaar Conquers the Sand to Win U23 Title at the 2021 Cyclocross World Championships: Results, Report, Photos - Ostend, Belgium