Both at NAHBS 2019 and the Sea Otter Classic, gravel bikes dominated the scene. Old World road-oriented companies are beginning to explore the new frontier that has taken hold of the New Gravel World.

According to Brad Cole of Look USA, the 765 Gravel RS leans unapologetically towards the road side of the gravel bike spectrum but has clearance for 700c x 40mm or 650b x 2.1″ tires. Look sent us a Force 1 765 Gravel RS for review. This In Review spotlight takes a first look at the bike and offers our initial ride impressions.

The RS moniker stands for “Racing Sport.” Given the racing intent, Look uses its top-end carbon on the bike to gain the lowest weight with best ride characteristics. The drive-side chainstays are dropped for increased tire and chain ring clearance. Though Look says the bike leans more towards road than mountain, the geometry is decidedly gravel with a slack head tube angle of 70.5 degrees paired with a 50mm fork offset. With the 700c x 37mm WTB Riddler tires, that yields a 72mm trail calculation, a centimeter longer than traditional cyclocross race bikes. The chainstay length is 42.0cm, and the BB drop is 7.0cm.

It’s the first frame we’ve seen that uses the Mavic Speed Release front thru-axle system. The frame has a threaded compatible nut in place as usual. Opposite is an open dropout that appears much like dropouts of old. The thru-axle stays with the Mavic hub. To remove the wheel, the axle is unthreaded as usual. It slides out about 2 cm where the axle is thinner and that slides out through the frame dropout. In use, it works quite well. It is indeed speedier, and you do not have to worry about where you placed the axle!

If you are looking for mounts, the 765 Gravel RS has plenty for bottles, but not as many for other uses. There are 4 bottle mount locations with 10 bolts but nothing on the fork or in the rear for a rack or fenders.

Stock wheels on the Force 1 bike are Mavic Allroad Disc Tubeless. The alloy tubeless-ready wheels have a gravel-ready 22mm internal width and a claimed weight of 1,890g. We weighed the front wheel alone at 890g, so the heavyish claimed weight is likely near correct. 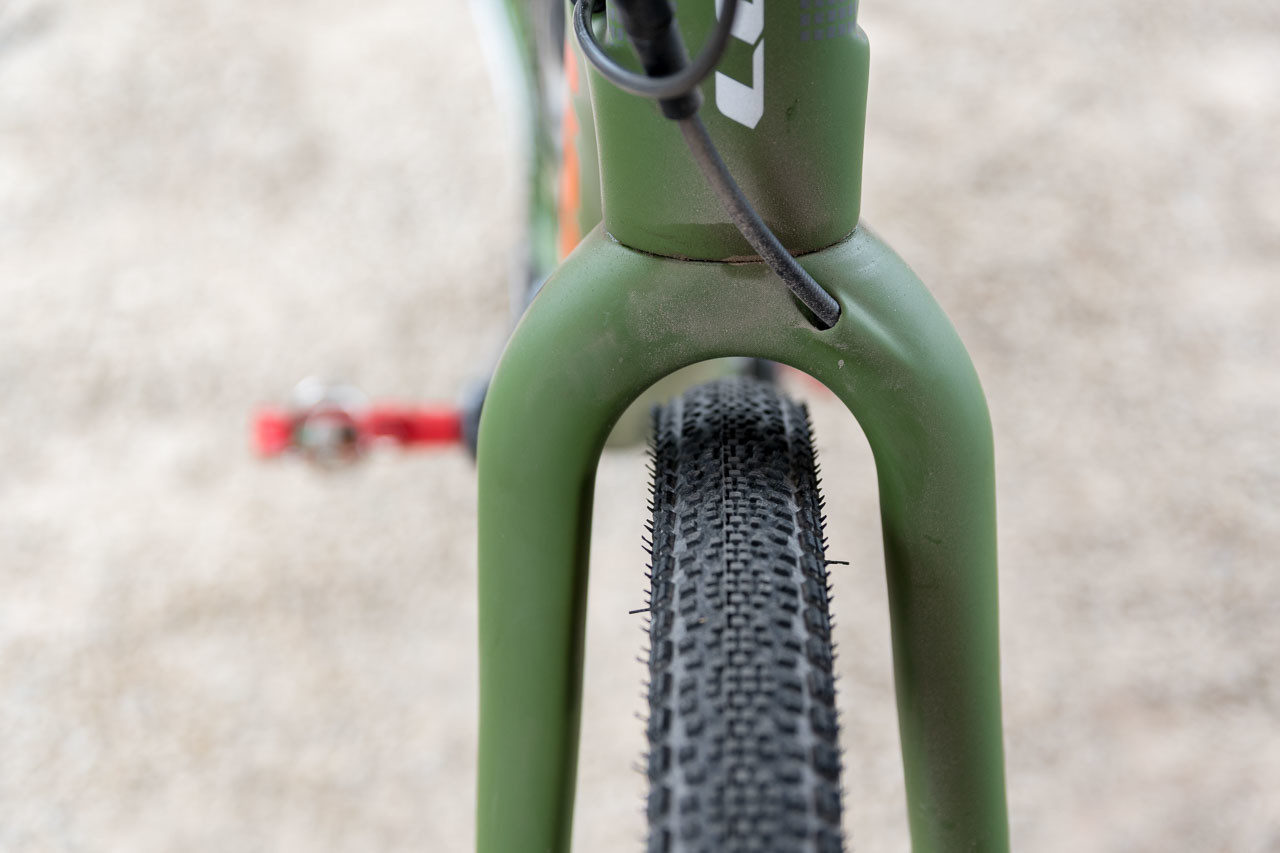 The Look 765 Gravel RS follows the integrated cockpit style of the 795 RS  road bikes and the 989/987 RS mountain bikes. The 765 Gravel uses a standard round steerer with the stem and spacers shaped to give the integrated look. The design still allows the user to swap to another brand of stem. The 765 Gravel RS has an integrated-style stem that still allows you to swap in your own. Look 765 Gravel RS Gravel Bike, 2019 Sea Otter Classic. © C. Lee / Cyclocross Magazine[/caption]

Our review bike weighs 19.5 pounds with Look X-Track carbon/Ti pedals. The frame alone has a claimed weight of 1,200g.

We have a 56cm Force 1 bike for review and have taken it on a few rides in real conditions. The first impression is that Cole was not joking in his comment about the bike’s road leanings.

The front wheel is further out in front of you thanks to the slack head tube angle and slightly increased fork rake. Those parameters will play a role later in our initial ride.

We began on pavement and the bike just took off from under us with the first pedal stroke. The road took us for a short climb and the efficiency is remarkable. Immediate uphill acceleration with increased effort brings a big smile, and that’s with a 19.5-pound bike and 30psi with tubes in the WTB Riddler 700c x 37mm tires. Road cornering is precise and confident.

Off-road, the bike tracks well, and the efficiency when powering off the smooth track over roots and small rocks is impressive. If you have to lay it out for a short ride-up, the bike transfers your effort to the rear tire. The front end doesn’t wander, despite the longish front center that makes the front wheel appear a bit out in front of you compared to a pure road machine or older ’cross bikes with a more aggressive front end. This might feel like an ideal one-hour cyclocross racer!

However, during our first rides, the stiffness that offers excellent road manners, handling and acceleration makes the bike skip around on those same roots and small rocks. It’s great to have the power and efficiency, but I was bumped off my line and had to re-correct in bumpy turns with body english. Diving down steep trails, the front tracks very well, giving confidence as long as the track is not too bumpy.

It’s our first couple of rides and impression with the bike as it came. As we ride the bike more, we’ll see how tire and wheel choices play a role. Stay tuned for a full review.

For more on the Look 765 Gravel RS, see the specs and photo gallery below. The motor and battery pack system incorporates into the down tube. The motor weighs a claimed 4.6kg and can add up to 400 Watts of e-assist. All of our coverage of new bikes and products is available in our 2019 Sea Otter Classic archive.