What do you look for in new set of hoops? For most of us, the holy grail includes durability, weight savings and reliability, in both tubeless performance and remaining round and true. But what about a wheel’s aesthetics? Fancy color-coordinated hubs and spokes? Prioritize domestic hub production and assembly? If so, Industry Nine aims to meet all your dream wheelset criteria. There are stock builds to make your decision-making easier, using formulae that Industry Nine has made successful. For gravel and cyclocross, the company offers the GRCX TRA wheelset that utilizes the Torch Road hub, a staple of the Industry Nine road wheels. Industry Nine’s direct thread aluminum spokes are relatively new and are a key component in the Torch Road Alloy (TRA) build. The 1575-gram GRCX wheelset uses an alloy rim starting at $1275 the pair. Our wheelset swapped the alloy rim for an ultralight carbon model.

We tested a GRCX wheelset upgraded with the Industry Nine UL 240 carbon rim from 2019. The UL 240 is a 23mm -deep carbon rim with a 24mm hookless internal width. The external width is 28mm with symmetrical drilling. The claimed rim weight is 355 grams, though the wheels arrived complete so we could not verify this. The rim is a collaboration between Reynolds Cycling and Industry Nine, but the line is redesigned for 2020 and should be introduced soon. The TRA system utilizes direct thread aluminum spokes, machined at the Industry Nine factory in North Carolina and color anodized for style. The spokes weigh about 6 grams each, about the same as an ultralight DT Evolution (2.0/1.5/1.8) stainless spoke with an alloy nipple. Buyers may configure the colors with all black being the default. There are three levels of color customization with an upcharge for each. Industry Nine claims better spoke reliability with the direct thread design. Interestingly the spoke wrench flats are at the rim side where the integrated spoke head sits. The threads are on the hub, so you’d think spoke windup would be a problem. A 1.5mm hex fitting is at the threaded end. Industry Nine uses boiled linseed oil as a spoke lubricant and says it hasn’t found spoke windup to be an issue.

The North Carolina company still relies on the 2:1 spoke lacing pattern we first saw in 2013.

The package is light with a 640-gram front wheel and a 740-gram rear with tape and valve stems (1380g for the set). Remove the valve stems and you’ll save 10 grams per wheel. Rim tape adds another approximately 7 grams per wheel. That yields a wheelset 1346 grams. That’s light, and approaches the 1296g Roval CLX Terra wheels we’ve also been testing. The UL 240 carbon rim has a hookless sidewall. The hook offered no advantage for low-pressure applications, complicated manufacturing, and added weight. Low-pressure tubeless tires rely on the bead shelf for sealing. Notably, the bead shelf of the UL 240 rim has no bead retaining ridge as seen on the UL 235 rims. Tires mount easily, but some, when deflated, will slide off the shelf, as did a new Ritchey Megabite 38. That is problematic for anyone with just a mini pump out on the trail or gravel road. Thankfully, that seems to be a danger mostly with a freshly installed tire. After setup, and two days for the sealant under the bead to set up, I deflated the same tire and it remained sealed and seated on the shelf. I would still like to see a bead retaining ridge in the profile for more confidence in the field. I will, on the other hand, say that bead-retaining features have made removing a tire challenging, which can be a problem at times out in the field.

The initial ride had a small amount of spoke ping from each wheel that did not alter wheel trueness or roundness. The subsequent rides exhibited none of that. The weight savings (compared to the wheels the Ultralite 240 TRA replaced) were immediately noticeable with the first pedal stroke accelerating from a stop. You notice it sprinting out of corners, and of course, when carrying the bike over barriers or up run-ups.

The gram savings don’t come with a compromise in rigidity. Under hard cornering, the lateral stiffness is remarkable for a relatively light wheelset, something that is often sacrificed in lighter wheels like the super light Stan’s NoTube Grail CB7 wheelset.

The 24mm-wide rim offers relative handling security with lower pressures and wide tires, so we’ve been running 20-25 psi for a 38mm Ritchey Megabite, a supple and reliable tubeless choice, but not the tightest bead fit. Despite the question of bead security, the tires passed the initial pinch test. After 8 months of long gravel rides and now a handful of cyclocross races where I raced with the 38mm Ritchey Megabites in local races, the Ultralite 240 TRA wheels remained as straight as they arrived. The cyclocross races I did were not as taxing on the wheels as my gravel rides which included mountain bike trails and long descents over rocky roads. Despite the constant undulation and bouncing, which flex and detension the wheel, the wheels remained true and round. I bottomed out on rocks, and the carbon rim looks no worse for wear. The wheelset’s performance in a ’cross race is stellar. When you lean the bike on the road, the lateral stiffness afforded by the large diameter spokes adds confidence where the large tire with low pressure may not. I mounted but did not ride the Ultralite 240 with a 33mm tire, the narrowest I would use given the 24mm internal width without a hooked sidewall. There is less rim protection with a tire only 5mm wider than the rim. Admittedly there is little theoretic consequence without the sidewall hook when using low pressure, but I like the idea of some additional mechanical retention if I were to run a narrow tire near the limit. I did run a 35mm Ritchey Shield that measured 36mm on the Industry Nine UL 240 rim, and thought it matched the rim well.

A light set of wheels has a lot of advantages. On the cyclocross course, the Ultralite 240 TRA is excellent, largely thanks to the light weight, allowing quick acceleration, and climbing. You’ll also appreciate the lack of mass when the front wheel is “flicked” for a quick lift or change of line. Without rim brakes, it’s hard to tell if the wheel is deflecting laterally on quick turns, cambers or in hard sprints, but the wheels felt solid in all those situations. Radial and torsional stiffness is not as easy to assess, the former especially with soft tires. If you need to meet the 33mm tire width limit, it will work but is not ideal with the Ultralite 240.

Industry Nine Ultralite 240 TRA is a beautiful wheelset, especially if you pay up for the color upgrade. It has a subtly unique appearance regardless. The wheels are lighter than many choices you’d pay just as much for, and have performed admirably and proven quite durable over the 8 months of riding over varying conditions. I recommend them for every type of riding where a 35mm or larger tire is appropriate, using low-pressure tubeless tires.

On a budget? We favorably reviewed a pair of Ultralite CX wheels built on the Torch i25 disc hubs in 2014. Those weighed in at 1380 grams the set with the aluminum UL CX rim, now called the UL 235, and stainless steel butted spokes. We liked the low weight, low-pressure tubeless reliability and durability over time. 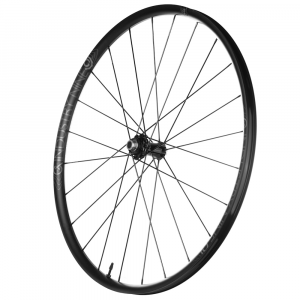