Cyclocross Magazine received a pair of the first production of FMB’s new SSC Slalom tubulars green silica compound tread. The tread is a new FMB design released last year as an all-around tread with more intricate knobs than its predecessor, the SSC. The new silica tread compound was developed to maintain better traction in low temperatures, which was developed with feedback from none other than America's 11-time National Champion Katie Compton.

The FMB Super Mud tire was one of the most supple tires in Cyclocross Magazine’s "Supplanting Suppleness Myths" article in Issue 28 (for the full results of our test, be sure to order your backcopy today, which is also available on Uberflip, in the App Store on iTunes, and on Google Play for Android.) But this green model is a new rubber compound that we first brought to readers' attention in February. We will certainly put these tires to the test in ideal, cold, wet cyclocross conditions in the City by the Bay, where it has not verifiably been said by Mark Twain, "The coldest winter I ever saw was the summer I spent in San Francisco." And we’ll be sure to save some tread for when temperatures dip below freezing in other parts of the country. 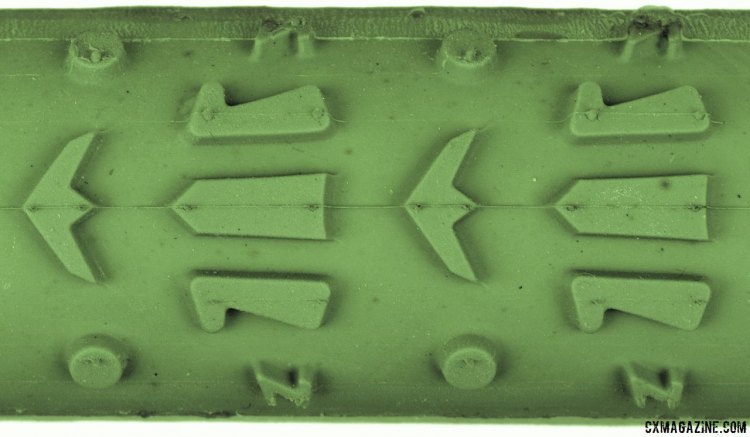 The FMB SSC Slalom Silica tubulars have a tread pattern that was released in 2014, consisting of chevrons, and an alternating circle and z pattern for the side knobs. © C. Lee / Cyclocross Magazine

Prev4 of 5Next
Use your ← → (arrow) keys to browse
Tags: cyclocross tiresFMBfmb sscslalom silicatubular tires