Rachel Lloyd Comes Back to Cyclocross with a Vengeance Lloyd racing to the win at Sea Otter. © Mike Albright

Rachel Lloyd was a staple of cyclocross several years ago, but for those of you who are new to the sport, she was a force to be reckoned with. After a hiatus to raise her children, she’s back and arguably stronger than ever, with a sixth place finish at Nationals (after racing only sporadically all fall) and this past weekend, she took the win at the Sea Otter Raleigh Cyclocross race. We checked in with her post-race to see what her plans for the offseason were, and what we could expect come September.

Rachel Lloyd: That sounds great! It was kind of surreal, racing in April. but for a start line that was completely lacking spectators, the beer tent was pretty key, everyone was there, including my husband and kids. He was yelling the loudest!

CXM: So tell me about the race, you and Nicole Duke got off the front pretty early on.

RL: Yeah, we kind of worked together a little bit. I could tell she was a little tired, so I just attacked her on the last lap. Before the barriers and after the sandpit I just kept drilling it.

CXM: Have you been prepping for this?

RL: No, no. I just rode my ’cross bike with my stepson to school on Thursday, to make sure it still fit me! And I’ve been doing a little mountain bike racing.

CXM: That’s right, I saw you at Bonelli a couple weeks ago. How has that been going?

RL: Yes, I’m doing the US Cup series. Texas was technical and flat so it was good for me, I had fun there. The rest of the courses, there’s so much climbing and those women are so strong! But I’ve always been good at ’cross though, I don’t know what it is about it… That’s always been the case.

CXM: Have you planned for ’cross season yet at all?

RL: I’m going to be racing for CalGiant again, and I’m really excited! I’ll take a break in July and August. 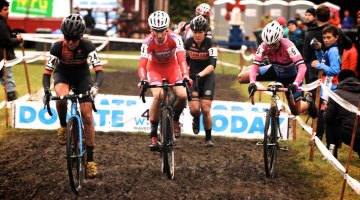 Win, Place, or Show: Safe Bet on Nash and Summerhill in the Second Round of Derby City Cyclocross – Full Results