The first 2015 UCI Worlds press conference was held yesterday before the start of the 2015 UCI Cyclocross World Championships in Tabor, Czech Republic. We have some aggregated press release notes from the event below, including some comments from one of our pre-race favorites, California-based Czech Katerina Nash, and a bit about a mole problem on course. 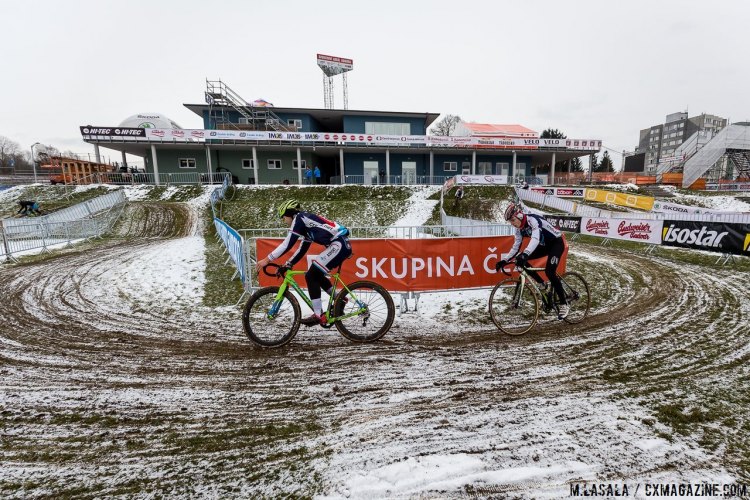 The punchy features that showed up in 2010 will return for 2015. © Matthew Lasala/Cyclocross Magazine

“ČEZ is really proud to be the partner of the 2015 UCI Worlds Championships. It is a follow-up to our cooperation from the previous championships. It is a great opportunity to promote our company. There will be ten thousands of spectators, tens of national teams and the races will be broadcast to the whole world. We are really happy to be supporting not only the organizers but also the whole South Bohemian Region. The event has a positive effect on the regional economy. We wish a lot of success to the Czech national team.

I would like to invite all the visitors to take part in the charitable foundation Nadace ČEZ. The icon of the foundation is an orange bike and people will be able to support two non-profit organizations from the surroundings of Tábor by pedaling on this stationary bike. The energy that will be gained from pedalling will be converted into the financial resources. We are expecting that those two organizations could divide up to 3500 euros.”

“Tábor will be hosting the championships for the third time and each edition is different, it is hard to compare them. It is a great responsibility for us to fulfil every obligation that we have promised. Besides, it is a wonderful opportunity to promote our town. We want to show people that Tábor is worth visiting. We are really looking forward to it but naturally, at the same time we are getting nervous.

“I have seen the course already, it is a really nice and demanding circuit. Tábor keeps a long tradition in cyclo-cross and we are looking forward to the fight among the best male and female cyclo-cross riders around the world.”

Many people keep reminding me that my starts are weak but every time I tell them that it is much better to have better finish than start.

“The course has not changed much compared to the last World Championships. So it is great that we will be competing on a course that we know. I have always liked this course. I was here in December for the first time before Christmas when there were no barriers here. Now the surface is soaked but the conditions might considerably change before the race kicks off.

Many people keep reminding me that my starts are weak but every time I tell them that it is much better to have better finish than start.” (laughing)

Čestmír Kalaš, President of the cyclo-cross committee and the organizing committee:

For instance, in the upper part of the track there are a lot of moles. First, we moved them away but on Wednesday they came back. We had to intervene again so we hired a man who will be watching them over.

We have a new sports complex Komora that was opened during the last World Championships. It is not only a good place for hosting a prestigious event but also for the public. You can cycle or go roller skating there, many people from the neighbourhood come there to relax.

Allow me to present a couple of interesting facts about the track: we have used 8 kilometers of barriers, it is those safe barriers that Zdeněk Štybar was calling for. They were provided by the TOI TOI company. The obstacles are 4 meters apart and they are 40 centimeters high. There are 4 huge screens and 15 passages on the course. The barriers are doubled in the corners so that there will be no touch between the riders and spectators. The grandstand is 160m long with six floors and it holds 3,500 spectators.

Yesterday we underwent the first track inspection and I think that everything is prepared for 100%. We always have to deal with small issues, we have done it twice before and there was always something.

We always have to deal with small issues, we have done it twice before and there was always something. For instance, in the upper part of the track there are a lot of moles. First, we moved them away but on Wednesday they came back. We had to intervene again so we hired a man who will be watching them over.

Up until now we have sold 7 thousand tickets but the major sales will happen on Saturday and Sunday, the VIP tickets have been already sold out.

When the championships are over I would be very happy if everybody went home saying that they were a success.

It is good to know that cyclo-cross is popular not only in Belgium.

“The track is brilliantly prepared. What I find also great is that if the weather changes dramatically the organizers are prepared. I really like those new barriers. Twenty four teams have been registered, with 70 riders only in the elite men´s race, which is excellent. I like the positive atmosphere around cyclo-cross here in the Czech Republic. It is good to know that cyclo-cross is popular not only in Belgium.”

Next post The 2015 Cyclocross World Championship Preview: The U23 and Junior Men in Tabor