“I made too many mistakes up there,” McDonald said, “And [Page and Powers] were just faster and stronger than me… it was one of those courses where you couldn’t make mistakes, and I made mistakes and got out-ridden.”

Page passed the pits halfway through the race, attempting to make up those bike lengths he lost after he suffered the flat tire. This had the consequence of him running with a heavier bike than Powers, although he was able to chew into that extensive lead by a few seconds as the laps wound down.

Hyde, meanwhile, shed the other chasers, and rode most of the last half of the race in fourth place alone, and five spots behind him, Justin Lindine (Redline), who won the Singlespeed Championship Men’s Race on Wednesday, was clawing his way back into the top ten from a top 25 start.

With four laps to go, the front four riders looked set in their positions, with Powers in front, Page trailing in second, McDonald following in third and Hyde crossing the line in fourth. This might have remained the same had it not been for the efforts of Dan Timmerman, who led a small chase group up to Hyde over a few laps with Summerhill in tow. Jeremy Powers used all the oxygen and skills he could muster to hold off a chasing Jonathan Page to take his third Elite National Championship. © Cyclocross Magazine

In the final lap, Powers was leading, and while he had a gap, his victory wasn’t certain. Much of his success in keeping his distance from a strong runner like Page was his near perfect handling of the course: Powers was continually riding through ruts and around corners where other riders were bobbling. He rode the final lap conservatively, however, and the gap did drop as Powers did everything he could to avoid a mistake. Jeremy Powers was the first across the line, Page put in a strong last lap to distance McDonald for second. 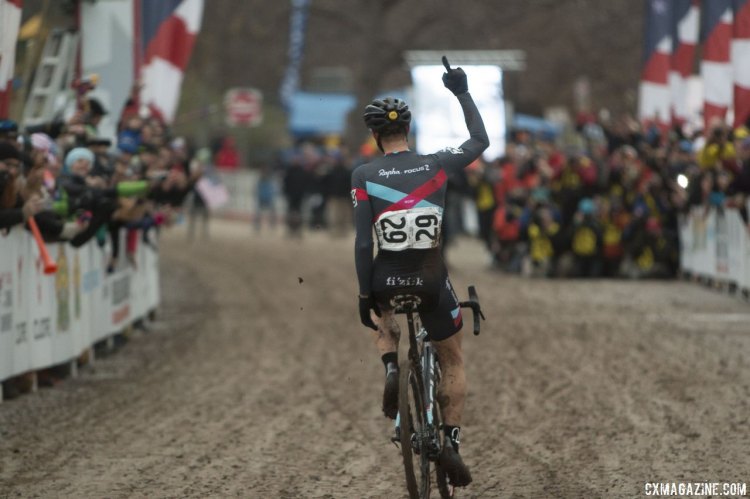 Powers crosses the line with his finger skyward, showing he’s number one for the second year in a row. © Cyclocross Magazine

We were able to catch up with Powers and ask him about the importance of retaining the national jersey: “With so much travel, this victory means more to me than… not the first one, but definitely more than last year. Last year I had such a great prep for it… [this year] I had to come back from a lot. This year winning has been cool, been special.”