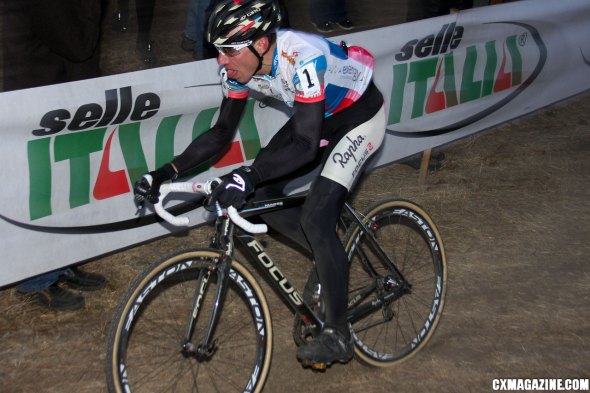 Jeremy Powers put an exclamation point on his 2011 series crown with another win Sunday in Bend. ©Pat Malach

BEND, OREGON – Jeremy Powers took his fifth-straight USGP win Sunday at the Deschutes Brewery Cup series finale on his way to wrapping up his second-consecutive overall crown. However, an early crash by Tim Johnson ended hopes for a rematch of Saturday’s penultimate throwdown thriller, where Powers nipped Johnson at the line after a tight squeeze through the final corner and Powers’ nearly-too-early celebration.

“It feels right today,” Powers said of his solo win. “Yesterday it didn’t feel right. I felt embarrassed that I put my hands up too early or whatever happened. And so today feels like redemption for me. I know yesterday was a good result, but today feels better for me.”

The last race of the 2011 USGP played out on a course very similar to Saturday’s but with colder temperatures and a cloud cover unusual for the alpine desert town of Bend. The grass, pavement and dusty singletrack of the well-worn former nationals venue had a couple new twists and turns but was 99 percent intact from the day before.

A crash that broke a lever on his bike knocked Summerhill all the way back into the 20s mid-race, and Kabush pounced to a slim lead that he held for three laps before the chase group reeled him in. Powers and Driscoll then formed a lead of their own that stuck until Powers distanced his former teammate to take the back-to-back win and put an exclamation mark on his 2011 USGP overall series title.

Powers said Driscoll had made a couple of jabs, so he figured he better give it a try with two laps to go. He made his move in the safest possible place on the course and surged past Driscoll as they rode over the wide, smooth pavement of the start/finish area.

“It’s just damage control,” Powers said of the timing for is attack. “There are so many places where you can have a problem like Tim and like Danny today. They both had, not even a big crash, but it was like their front tires slid out and then they fell. I picked that spot because it’s where I felt the most comfortable and where I had the most space. Other parts of the course there are rocks that I don’t know if they’re there and this or that. It’s hard to pass in other places too. It’s actually like singletrack out there with the ruts we have that we’ve been racing on all weekend.”

Noticeably absent from the front of the race after lap three was Tim Johnson (Cannondale-Cyclocrossworld.com), whose own crash and recovery landed him as far back as 17th before he found his way back up to teammate Christian Heule’s wheel to claim sixth.

Zach McDonald’s 10th place netted him the U23 win as well as the overall U23 series crown in a tie-breaker with Yannick Eckmann. Cody Kaiser led the chase group early, but a mechanical knocked him far back. The Cal Giant rider still took the bronze for the U23s for the day and for the overall, and Yannick Eckmann’s 11th place on Sunday earned the silver for the day as well as for the U23 series.

Ryan Trebon sat out the last three races of the Elite men’s series racing due to an injury, but he still scored bronze in the overall series after Kabush’s Sunday effort lifted the Canadian rider into silver. Powers, of course, dawned the carbon fiber crown of the 2011 series champ and reflected on his second overall win and this year’s string of individual victories.

“This hasn’t come over night,” he said. “I feel like I’ve been working hard at it for so long. If I hadn’t won today it would have still been fine. But today just felt right. It just felt really good to win here. Last year’s series was really, really down to the wire with Tim. It was more dramatic in that we were teammates and we were kind of beating the crap out of each other. But to win this year again like last year and get back-to-back USGP titles is great. I’m really proud of it.”