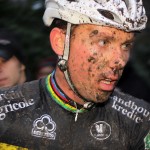 Essen, Belgium – Leading by some 25 meters midway through the final muddy lap of the GP Rouwmoer, Niels Albert had his first win of the Gazet van Antwerpen Trofee series all but sewed up. During the race the 24 year-old BKCP-Powerplus rider had clawed his way from a slow start to front of a group that included pretty much all of the Belgian heavy hitters, then launched himself over one of the course’s two steep flyovers to pull clear of Sven Nys (Landbouwkrediet), Kevin Pauwels (Telenet-Fidea), and Klaas Vantornout (Sunweb-Revor). Primed to take his third win in as many weeks, the former World Champ looked truly unbeatable as he blasted through his final trip around the flat but heavy, muddy circuit. And yet it was Nys who crossed the line first in this small town in far northern Belgium, claiming a victory that put him within striking distance of the overall series lead.

Albert, who missed the early season because of both illness and injury, but has shown top form in recent weeks, watched the win slip away as he emerged from a deep, sloppy mud puddle with a flat rear tire. Visibly distraught, he pounded his handlebars in frustration, pedaling furiously to try to hold off the trio of racers behind him. But on a course thick with mud, there was little the young Belgian could do, and he was quickly reeled in by the Nys-led chase.

Albert’s vanishing solo victory had looked even less likely early in the race, as the notoriously slow starter was forced to work his way through a crowded field during the race’s early laps in order to have even a chance for the win.

While Albert picked his way through traffic during the first lap, up front Nys took over the early lead from Telenet-Fidea teammates Rob Peeters and Bart Wellens, racers further back took their time in organizing a chase. After a series of attacks and regroupings, Pauwels connected with Wellens and Nys and Peeters fell off the pace, leaving Nys, Wellens, and Pauwels in charge.

But behind them Albert had joined with Sunweb’s Sven Vanthourenhout and the Rabobank duo of Gerben de Knegt and Bart Aernouts, chasing the frontrunners during the first few laps.  While Wellens, Nys, and a handful of others fought a mostly tactical campaign, the Albert group went full steam ahead, picking up Vantornout and a fading Peeters on the way to the front.

By the middle of the fourth lap an eight-man group had come together in the lead, but Vanthourenhout accelerated through a short, sandy section and quickly found himself with a ten second gap. For a lap the chase made little progress in closing the gap to Vanthourenhout, before Nys decided enough was enough. The Belgian Champion dropped the hammer, fracturing the already strained chase group and retaking the lead when Vanthourenhout swapped bikes in the pit.

The reinvigorated tempo popped the two Rabobank riders, Wellens, who appeared to still be feeling the effects of his hard crash in Gieten two weeks ago, and Vanthourenhout, leaving just Albert, Nys, Vantornout, and Pauwels up front going into the final lap.

And then came Albert’s attack and the flat, which left just three riders in contention. Pauwels, already looking tired coming into the final lap, sat in third while Nys and Vantornout traded shots.  Momentarily, Vantornout was able to seize control of the race and appeared to have a chance to take his first win of the season, but he couldn’t match Nys’ finesse in the final few muddy turns of the race. Though he still had Nys’ wheel on the final stretch of road, Vantornout appeared to lack the power — or the will — to come around, and Nys cruised to victory. Pauwels rolled in for third several seconds behind.

Bart Wellens managed to bounce back for a fourth place finish, while a dejected Albert was forced to settle for fifth.  American Jonathan Page started strong, but was also stung by a flat tire — twice — and withdrew from the race in order to save energy for tomorrow’s Vlaamse Druivencross in Overijse.

“The second best wins today,” said an honest Nys after the finish. “When Niels attacked I was close to my limit and wasn’t able to follow. I was aiming for second place.”

But Nys added that he didn’t necessarily feel bad about taking the win over the resurgent Albert. “Bad luck is part of the sport. One day it all goes well, the other day it doesn’t go as you want. I am not superstitious, but this is a nice compensation for the incident with the pedal in Gieten. The season is becoming more interesting with more and more riders battling for the win. We have to wait and see who will be the best during the Christmas period. I have to admit that I didn’t feel good in the warm-up. I rested a lot this week which isn’t good for my legs. This is a good sign for Overijse tomorrow. Normally I am better on the second race day after a rest period.”

Vantornout, who came as close as he had all season to taking a win, told reporters afterwards that he simply couldn’t beat Nys today. “I waited all race for the right moment,” said the Sunweb rider. “In the overall ranking I’m not a factor after my abandon in Hasselt and tomorrow in Overijse is also important. But when I still felt good in the final lap I gave it a go but Nys was the strongest. In the sandpit I tried to surprise him, but I didn’t have the legs anymore.”

And Albert, of course, said he was incredibly disappointed to watch his victory simply disappear. “I must have hit something in a puddle,” he said afterwards.. “At that moment I was riding on my rim. It happened just after the pitlane, half a lap before the next one. Bummer!”

The fifth place finish today leaves Albert in seventh overall in the GVA Trofee standings, 32 points down on leader Kevin Pauwels. Nys sits in second, 10 points back. World Champion Zdenek Stybar, who missed the race in his adopted hometown while he continues to recover from a knee injury, is third, seven pointd behind Nys.

Dutch rider Lars van der Haar (Rabobank-Giant Offroad) took an emotional win in the U23 race in Essen. The little Dutchman was the best in the sprint over Wietse Bosmans (BKCP-Powerplus) after a thrilling battle. Sunweb’s Tijmen Eising finished in third following a crash in the final lap while riding in pole position. Joeri Adams and Jim Aernouts finished in fourth and fifth. Due to his win Van der Haar takes over the lead in the GVA series from his teammate Adams.

Bosmans was very strong and tried to force something in almost every lap. In the third lap Bosmans attacked several times, reducing the leading group to just four riders: Bosmans, Aernouts, Van der Haar and Teunissen. But the four didn’t pull through and one lap later the leading group grew to seven riders with Van Empel, Adams and Eising returning in the front of the race.

With three laps to go Tijmen Eising attacked, followed by Bosmans and Van der Haar. Adams followed at a few meters behind, while Aernouts, Teunissen and Van Empel were dropped for good.

Turning into the final lap still four riders had a chance to win the race: Bosmans, Van der Haar, Eising and Adams. Eising attacked early and created a small gap on his rivals. It looked like that Eising was on his way to his first win of the season, but he slipped away in a corner, dropping back to fourth position. Halfway through the final lap Adams chances were ruined as well by a flat tire while the pit still far away.

Turning onto the final straight Van der Haar misjudged the final corner. Bosmans tried to take advantage of it, but the strong Dutchman refound his rhythm immediately and prevented the Belgian from taking his biggest win of the season. For Van der Haar, it was his fourth big win of the season after Zonhoven, the European Championships and Gieten.

Van der Haar said later that the win was very emotional — exactly 8 years ago today his sister, Femke, died from cancer. “Today I really wanted to win the race to honor my sister.”, said the European Champion. “I misjudged the final corner and gave everything to return to his wheel. It was a tight sprint, but I luckily made it. He was very strong today.”

Bosmans, meanwhile, was satisfied with his second place. “It went very well. It was exciting until the end. I turned onto the final straight in pole position but Lars was too strong. The condition is good and it looks good for the next weeks.”

Eising, on the other hand, was a little disappointed in his third place. “I felt very strong today. After my bad start I bridged up to the front halfway through the race. I recovered the next two laps to give it all in the final lap. Unfortunately I crashed and it was over.”

Stay with Cyclocross Magazine for more, including photos, rider reactions, and complete results.