Although she worked hard fending off American National Champion Katie Compton all Saturday, Katerina Nash was able to find the energy to carry her to another victory on Sunday, this time with only an eight second gap over Compton. Caroline Mani, who was expending loads of energy throughout the race to ensure the pace remained fast at the front, came in third over 20 seconds after Nash. With Jeremy Powers now off the C2 schedule on the Pro CX Calendar, the Cannondale p/b Cyclocrossworld.com riders had free reign to exert their legs over the Men’s Elite Field. Early in lap two, Stephen Hyde and Curtis White both took off, and began trading pulls with each other to only increase the gap as the laps drew on. 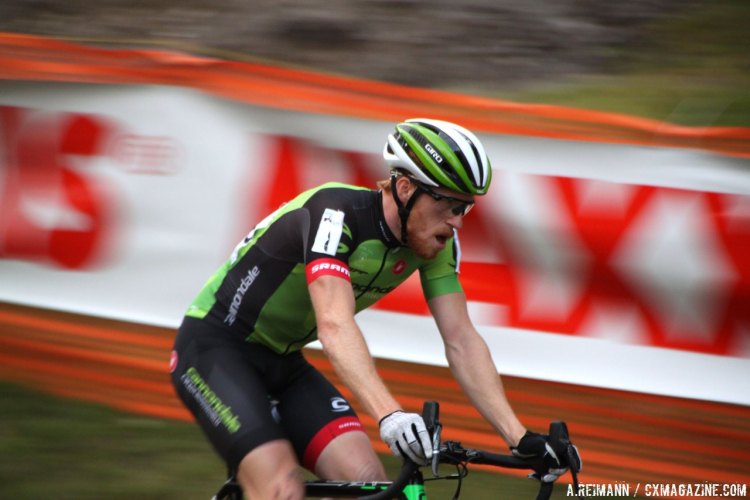 Hyde worked with Curtis White until two laps to go, and attacked for the win. © Andrew Reimann / Cyclocross Magazine

With one and a half laps to go, Hyde launched his attack over the younger rider, and created over a six second gap. Jamey Driscoll, meanwhile, broke free of a large chasing group and began reeling the leaders in. Hyde and White were both able to keep away from the Raleigh/Clement rider. Driscoll was able to fend off last second attacks by teammate Kerry Werner and Tobin Ortenblad to take third. In the Junior Race, Spencer Petrov was able to fend off National Champion Gage Hecht for two days in a row. Today, he pulled away with three to go, and was able to build his lead with each successive lap, winning by almost a full minute. Eric Brunner came in third, beating Cameron Beard and Michael Owens at the line.

Next post Mechanical Monday: What Amateur Mechanics Should Have in Their Toolboxes