COVINGTON, KENTUCKY— Despite a half inch of rainfall Halloween night to make the course’s steep hill and twisting off-camber sections slick, Katerina Nash and Ryan Trebon had the skills to conquer day one of the Toyota Cincy3 CX Festival (C2) just across the Ohio River from downtown Cincinnati presented by Cincinnati Cyclocross, United Dairy Farmers, Zipp and Reece-Campbell, Inc.

Racing continues with the C1 Cross After Dark Saturday in Mason and the final C2 event Sunday at Harbin Park in Fairfield, and will be covered live here on CXmagazine.com.

The fall colors were in peak form in Cincinnati and so were the pros.  As the elite women took to staging, the wind upped a notch dropping the temperature a few degrees.  Most wore long sleeves.  Despite overnight rain, the course proved to be fairly dry, a bit mushy but not slippery.

At the gun, Caroline Mani (Raleigh-Clement) got off quick, but it was Meredith Miller (California Giant Berry Farms/Specialized) with the holeshot. Surprisingly absent from the driving end was Katie Compton (Trek Cyclocross Collective).

Early on the first lap, over the first hill, Miller strung out a first selection including Katerina Nash (Luna) and Nicole Duke (Marin Bikes/Spy). Nash was the first to turn the screws. The move put the hurt on Mani and Duke. Both would DNF on the day.

Compton was quick to respond to Nash at the front and quickly slotted in behind with Miller, Duke and Antonneau (Cannondale/CyclocrossWorld) in tow. Showing her young ferocity, 16-year-old Chloe Dygert (Midwest DEVO) sat in the top 10 early. 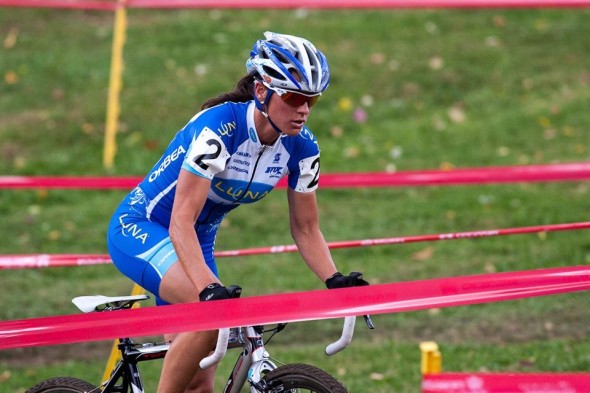 Midway through the first lap, Compton attacked and only Nash could follow. Duke lead the chase only three seconds back with Miller and Antonneau. With Nash and Compton driving the front, that three seconds became 30 quick and Duke was soon out of the picture.

With three to go, to the surprise of the crowd, Nash began to pull away from Compton. Nash looked back, saw the damage and set to driving it out of every corner and up every hill to extend her gap. Then, a reverberating gasp could be heard around the venue. Compton pulled off the course.  According to husband Mark Legg after the race, she suffered an asthma attack. Compton would DNF.

Nash was now gone solo with well over a minute to Miller and Antonneau. It would stay that way till the bell lap until Antonneau began to fall off the pace. The seven second gap became insurmountable for Antonneau and she would settle for third. Nash took the win, followed by Miller, Antonneau and Mo Bruno Roy.

Post race, Compton could be seen riding around seemingly recovered from a scary few moments. She confirmed to Cincinnati Cyclocross that she will ride Saturday at Kings CX After Dark.

The first selection of the day was made as Trebon attacked going into the second lap on the pavement bringing along Johnson and Yannick Eckmann (Raleigh Clement).  Jeremy Powers (Rapha-Focus) was surprisingly absent.

Sensing the urgency, Trebon began flicking his elbow trying to get Eckmann to pull through. Tim Johnson took note and went to the front.

Johnson seemed notably quicker than Trebon and began to put in a gap to him and Eckmann. Soon, Johnson pulled away solo with a comfortable 15 second gap. As Trebon tried to minimize the damage, Eckmann was dropped.

With four to go and Johnson attacking all the lines trying to maintain his lead, Trebon proved smooth behind taking back second by second. Trebon would seal the deal and finally make contact with Johnson with two to go.

Johnson looked like he left it all out on the course and Trebon took full advantage, putting in a huge effort with the bell.  Johnson couldn’t respond. Johnson took second behind Trebon, and behind them was Jamey Driscoll, Ben Berden, Yannick Eckmann and Justin Lindine.