As the sun set behind Mount Krumpit, racers took to the start line for the first race in three days of UCI racing in Iowa at the Volkswagen Jingle Cross Rock weekend. In the women’s race, Katerina Nash took the first win of the weekend, followed by two Millers: First Amanda, and then Meredith, to round out the podium. Miller and Nash on the flyover. © Michael McColgan

In the men’s race, Jeremy Powers, who has had a nearly perfect US season thus far, again took the win, followed by Raleigh-Clement teammates Ben Berdenn and Jamey Driscoll in second and third, respectively. Noticeably missing from the front of the men’s race was Ryan Trebon, who took the win last weekend at the first race of the Kentucky weekend. He tweeted that he wasn’t feeling well, but plans to be at the start line tomorrow. 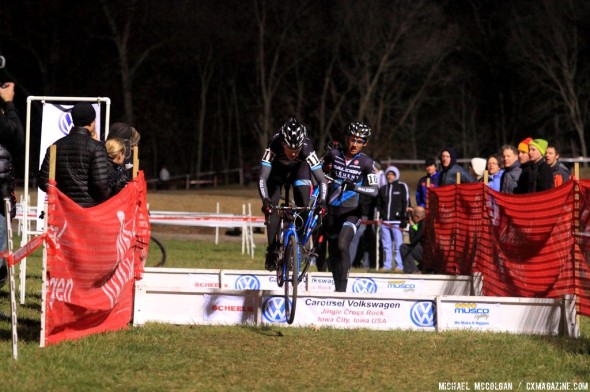 Driscoll, Powers and Berden on the men’s podium. © Michael McColgan