At the Canadian National Championships last weekend, Cyclocross Magazine was treated to spectate an old world cyclocross course of cobblestones and alleys with nearby shops. Gabby Durrin told us that although Winnipeg hosted quite an urban course, it reminded her of the race in Diegem.

Perhaps it was appropriate that we got our first in-person look at Eddy Merckx’s Eeklo70 in this setting. Just like the cyclocross course in Winnipeg, the traditional meets the urban with the Eeklo frame. The beefy bottom bracket shell and chain stays are the most apparent feature of the frame at first glance. © Andrew Reimann

To guide us through the frame’s specs and features, Dan Richter, along with his wife and father, gave us the full tour. If that name sounds familiar, we wouldn’t be surprised. Richter is the proud owner of Canada’s Café Roubaix Bicycle Studio, a modest shop that was thrust into the spotlight last year when Specialized engaged in a trademark battle over the usage of Roubaix.

Much lesser known about Richter is that he is obsessed with the sport of cyclocross, and with help from the Wounded Warrior Project, he began racing after he came back from a tour of duty in Iraq. Today, not only does his company hand-build wheels, but they are a proud Eddy Merckx dealer, and were honored with the first Eeklo70 frame to grace North America. Eddy Merckx displays Eeklo on the frame, which is named after a cyclocross race he won in 1970. © Andrew Reimann

The Eeklo70 comes with a few firsts for Eddy Merckx. This is the company’s first full carbon cyclocross bike, and is although the frame we got to look at had cantilever bosses, there is the option for road discs, another first for a Merckx bike.

Wondering what the name Eeklo70 means? After sorting through a few Belgian race results, we discovered that Eddy Merckx won the Eeklo Cyclocross Race in Flanders, partnered with Eric De Vlaeminck, in 1970 (hence the 70). On the frame you can also find their finishing time, 1 hour and 38 minutes, which took place over 35km. The frame incorporates the same layup technology as the road carbon frames, and comes with internally routed cables. © Andrew Reimann

To say that the frame is beefy, particularity the bottom bracket shell, is akin to saying that the Paris-Roubaix is a race with a few bumps. The carbon itself is the crafted with the same layup technology and material as the EMX3 road models (the CL+ 300 frame), which is to say Merckx’s middle-of-the-road carbon offering.

The Eeklo70 will be available in six different sizes, from 48cm to 58cm, staggered by even numbers. Unfortunately, the company has not released any claimed weights of the frame as of yet. The cantilever frame model is clean and unassuming, while the disc model comes with louder green accents. © Andrew Reimann

While this is the first Eeklo70 frame in North America that can be sold, potential buyers in the United States won’t likely see this in their local dealers for another month, and even by that time, the Eeklo70 will probably be sold only as a full bike as stated on the Eddy Merckx website.

The full cantilever build is priced at $2,799, and includes a Shimano 105 drivetrain, CX50 brakes, an entry-level Deda stem, seatpost and handlebars, as well as Fulcrum Racing Sport CX clincher wheels.

The hydraulic disc model comes with Ultegra, with Deda Zero 100 upgraded parts for the stem, seatpost and handlebars, and Shimano’s RX31 wheels. These upgrades, with the same carbon-grade frame, will MSRP for $3,999. 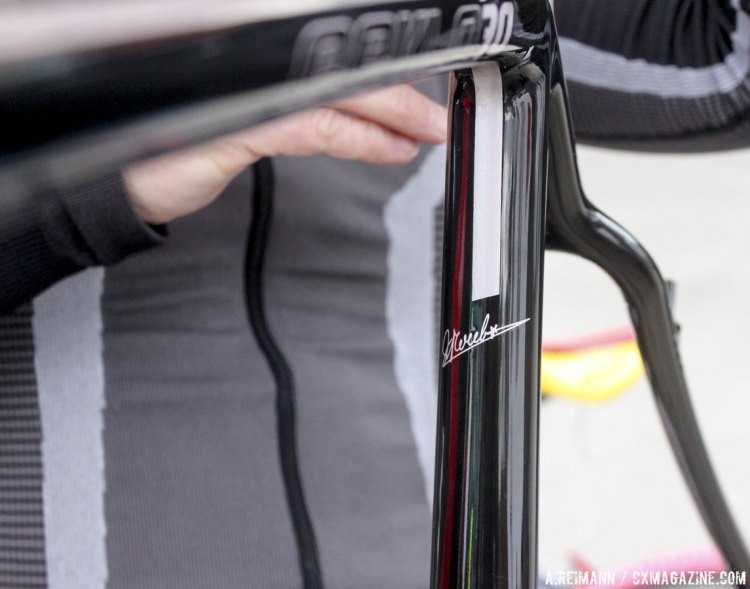 Unlike the edgy top tubes of the Eddy Merckx road frames, the cyclocross frames are smoothed out for comfortable shouldering. © Andrew Reimann