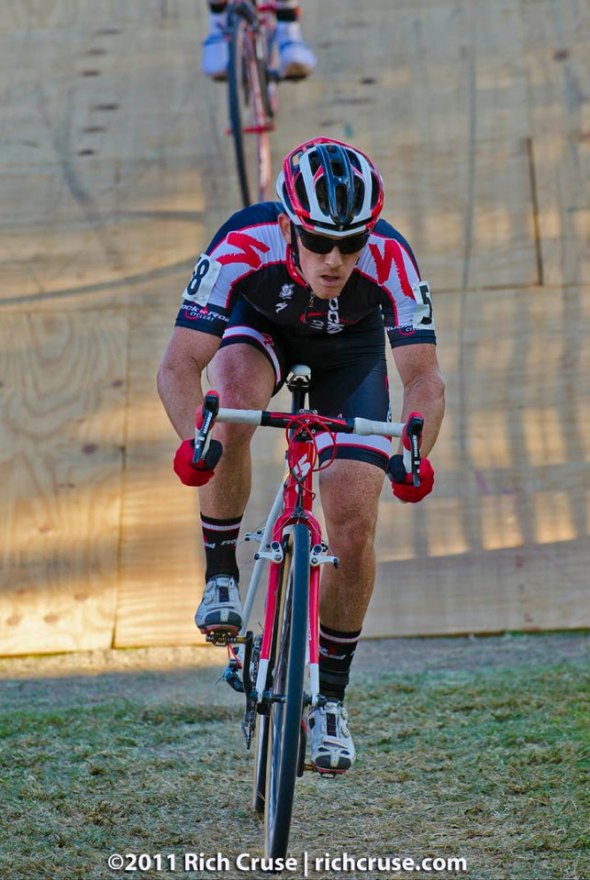 The men on the flyover. © 2011 Rich Cruse/richcruse.com

IRVINE, CALIFORNIA—Sunday morning might have been rough for some Cross After Dark revelers, but with over half-a-day of recovery between the night race and the 3 PM race, competitors were clearly rested enough to put on a great show for spectators.

Trebon led from the start of the race, with Wells hot on his heels. The two traded positions for the entirety of the race, but Trebon’s engine overpowered Wells on the last half-lap.

Day two of the California Gold Events presented by Shimano was a bit of déjà vu. The California sun and dry conditions made for a magnificent day of racing and the Southern California course almost a minute faster in all groups.

Race promoter Dorothy Wong wanted to make the Spooky Cross UCI weekend historic and put together the best racing this venue has seen, since the land will be developed this year. The fast course held a mixture of everything. A fast start into a hairpin barrier section, then back on the gas and out of the main infield to the back of the park for the long, deep sand pit. On the way back in, the course delivered a tricky off-camber right turn that threw riders off. Then it was onto the flyover and back into the main venue for a few more twisty turns, stairs and more. This was a course that suited Trebon and Mani’s power over the rest of the riders.

Elite Men:
Ryan Trebon (LTS-Felt) was able to lead out the race from the start, and the front group of four set a pace from the get go that was all business. While Brian Lopes (Oakley-Ibis) had to start third row again, he didn’t grab the hole shot on day two. Lopes did manage to make the lead group through the first lap along with Todd Wells (Cal Giant-Specialized) and Cody Kaiser (Cal Giant-Specialized).

Ben Berden (Ops Ale-Stoemper), who finished second on day one, was hard on the chase and eventually worked his way into the group after some early bike exchanges. But, midway through the race the heat and pace took its toll on riders, breaking groups apart all over the course. Trebon, who stayed up and front did a majority of the work all day, was looking the freshest of all riders.

With two laps to go it was Trebon and Wells battling up front, and just behind it was Berden chased by Chris Jones (Rapha-Focus). Kaiser was not far behind Jones and was putting in his best ride of the season as the top U23, eventually taking fifth overall in the Elite men. Allen Krughoff (Boulder Cycle Sport) was the next through in sixth.

In the final lap, Jones continued his chase, but Berden held on for third with Jones fourth. It was another exciting final lap as the night before. This time it was Wells and Trebon together until the sky-over, where Trebon attacked. The obstacle led into the last bit of technical turns, but the long straights after were what Trebon needed to make his effort work. As Trebon looked over his shoulder coming through the first straight next to the pits he had at least 20 yards on Wells. Trebon again punched it through the final two straights just to make sure his effort would stick for his second win of the weekend.

It was an exciting weekend of California racing and there’s more to come. The California Gold Events presented by Shimano will host another UCI weekend this year, December 3rd-4th in Los Angeles. The race entertained people last year with some tight, challenging turns for racers, and this year’s event “Live at the Greek” will look to match the spectacular Spooky Cross weekend.