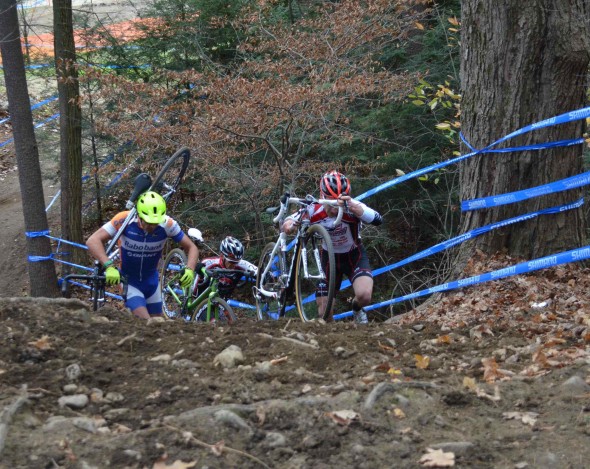 The front of the elite men’s field, led by Lindine and Craig. © Molly Hurford

The skies were clear in Northampton, Massachusetts, this weekend and the devastation wrought on the East Coast by the recent hurricane left Look Park relatively unscathed, leaving the course dry and tacky for racers. A slightly redesigned course delighted returning racers, as did the battles at the front of both elite races. In the women’s race, Mary McConneloug took the win over Crystal Anthony, who traded spots with her all race. Behind her, Anna Barensfeld took third. In the men’s race, Adam Craig seemed poised to duke it out with hometown hero Jeremy Powers, but a crash mid-race took him and Canadian Raphael Gagne out of contention for the win. Powers attacked Jeremy Durrin after Justin Lindine, who was leading with Durrin, had a bad crash. Powers soloed in for the win, followed by Durrin and Shawn Milne, a wild card in the race, came in for third.

The prestigious Cycle-Smart International, the longest-running UCI sanctioned cyclocross race in the United States, began its 22nd year today at the world-class venue of Look Park in Northampton, Massachusetts. Boasting its biggest year to date in race registrants, sponsors, and vendors in the expo area, the CSI promises to continue growing for many years to come. Crowds came to Look Park to enjoy fare from the food trucks, including grilled food to raise money for the JAM Fund for young cyclists co-founded by Jeremy Powers, while watching the race action unfold on the spectator-friendly course. The fast corners of the lower fields connect with tight twists and turns through the trails of the upper section of the park via the steep and rutted Stan’s NoTubes run-up, and once again at the Raleigh run-up back to the upper deck. Not only challenging racers with elevation changes and tough cornering, the CSI is a relentless power course, making apparent who is the strongest contender.

This weekend’s edition of the CSI is also the fifth and sixth Rounds of the 2012 Shimano New England Professional Cyclocross Series, following The Gran Prix of Gloucester and the Providence Cyclocross Festival, and leading up to the series finale at NBX Gran Prix in Warwick, RI, making the Shimano NEPCX a truly top-tier series.

The Elite Women’s race began under sunny skies on a brisk New England afternoon. Despite Hurricane Sandy’s effects on the Northeast on Monday of this week, the course was completely dry. Conditions looked promising for Crystal Anthony (Cyclocrossworld.com) to overcome the competition with her formidable power on a course that favored her strengths. However, former Olympian Mary McConneloug (Team Kenda-Seven-NoTubes) has said she is determined to take the series win this season and looked motivated to win. The first lap saw these two break away from the rest of the field, chased by Arley Kemmerer (C3-Athletes Serving Athletes), Anna Barensfeld and Sally Annis (both of Pedal Power Training). Anthony attacked and appeared to get away, but McConneloug, not to go down without a fight, chased back on to Anthony and launched an attack of her own. Rather than wait on the other’s wheel, the two repeatedly traded attacks for the entirety of the race; however, a bobble by Anthony on a challenging corner finally allowed McConneloug to build a substantial gap in the final lap of the race. In a tremendous show of power by Anthony, she chased back on to within a bike length just as McConneloug completed a smooth ride for a clean win. “There was awesome competition out there today. I’m excited that I have a good chance at the series,” said McConneloug after her great ride today. Meanwhile, Barensfeld broke away from the chase in an attempt to connect with Anthony and McConneloug. Despite some incredible riding, and being in sight of the two leaders, she was unable to bridge and finished in a strong third. Rounding out the top five were Evelyne Blouin (Ride with Rendall) and the racer who started in the last row and finished fifth, Jenny Ives (Favata TRT-Unovelo Cross Team).

The Elite Men took to the course, and it seemed clear that hometown favorite Jeremy Powers (Rapha-Focus), the US Cyclocross champion ranked 10th in the world by the UCI, would dominate the day. However, following his crash last weekend during the World Cup cyclocross race in Plzen, Czech Republic, followed by drawn-out travel back to the US complicated by the hurricane, it was uncertain that Powers would be on top of his game against worthy competition like Jeremy Durrin (JAM Fund/NCC/Vittoria), Justin Lindine (Redline), and former Olympic mountain biker Adam Craig. A large group formed in the first few laps, including the organizer of the CSI since its inception, Adam Myerson (Team SmartStop/Mountain Khakis). Leading the way were Craig, Durrin, Lindine, Cyclocrossworld.com teammates Dylan McNicholas and Shawn Milne, Dan Timmerman (RGM Watches – Richard Sachs), Raphael Gagne (Rocky Mountain Factory), and Anthony Clark (JAM Fund/NCC/Vittoria). Gagne, Durrin, and Craig all took turns in the lead of the race as Powers appeared calm in second or third wheel. Several attacks put gap-forming pressure on the group, but it was a crash taking Craig and Gagne down that did the final damage to this group, and Durrin and Lindine got away off the front, as Milne chased them. Powers found himself chasing from further back with Timmerman and McNicholas in tow, as Lindine slipped on a corner to leave Durrin alone in the lead. Milne and Powers both lit up the course to make contact with Durrin; these three would finish the final lap in a tight group, and Powers’ victory seemed uncertain. He attacked at the very last moment, hitting the final pavement stretch before the others to take a victory. Durrin had a great race, finishing second, Milne, McNicholas, and Timmerman rounding out the top five.

Day two of Cycle-Smart International and Round 6 of the Shimano NEPCX series will commence tomorrow. Follow @NEPCX on Twitter for race updates as they happen, and watch CrossResults.com for live race results throughout the day.